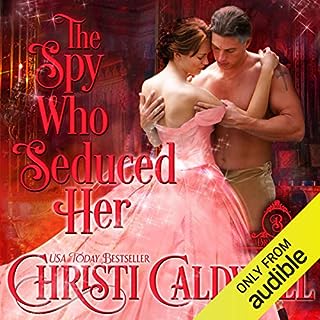 A widow with a past...The last thing Victoria Barrett, the Viscountess Waters, has any interest in is romance. When the only man she's ever loved was killed, she endured an arranged marriage to a cruel man in order to survive. Now widowed, her only focus is on clearing her son's name from the charge of murder. That is until the love of her life returns from the grave. A leader of a once great agency...Nathaniel Archer, the Earl of Exeter head of the Crown's elite organization, The Brethren, is back on British soil.

I really enjoyed listening to this book because for a change it was about an older couple in their early forties. And their love story was really lovely. Ive listened to most of the others that came before this and loved them all also. I skipped a couple but it's a bit confusing as the different series intertwine with each other so you don't really know which one comes next, as there are the same characters of one series in other series. I've listened to most of The Heart of the Duke series accept for the last 2, but this book is from The Brethren series and next I'll be going back to Heart of the Duke series to listen to the one before the last and then going back to the Brethren series again. It sounds very confusing but I'm trying to read them in order according to the year if nothing else.
The only thing that's missing in these books are the steamy sex scenes. Would have liked a bit more. Tim Campbell was great as usual. Love his narrating. 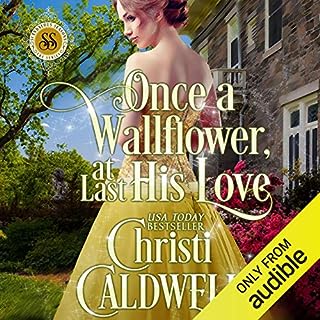 Responsible, practical Miss Hermione Rogers, has been crafting stories as the notorious Mr. Michael Michaelmas and selling them for a meager wage to support her siblings. The only real way to ensure her family's ruinous debts are paid, however, is to marry. Tall, thin, and plain, she has no expectation of success. In London for her first Season she seizes the chance to write the tale of a brooding duke. In her research, she finds Sebastian Fitzhugh, the Fifth Duke of Mallen.

Loved this whole series. I cried I laughed and smiled. Each story was so beautiful especially this last one. The only thing is that I wish they were a bit more steamy with more love scenes. Tim Campbell was brilliant as usual. I love his narrating. 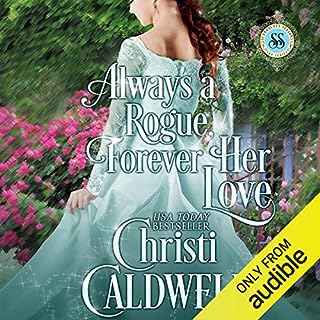 Miss Juliet Marshville is spitting mad. With one guardian missing, and the other singularly uninterested in her fate, she is at the mercy of her wastrel brother who loses her beloved childhood home to a man known as Sin. Determined to reclaim control of Rosecliff Cottage and her own fate, Juliet arranges a meeting with the notorious rogue and demands the return of her property.

Loved every minute of it. I just couldn't stop listening. It was a beautiful love story. Tim Campbell was brilliant as usual. I love his narrating. 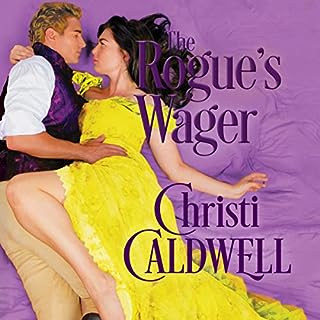 Lord Robert Dennington, the Marquess of Westfield, has long reveled in the freedom afforded him as the ducal heir. He knows he must someday do right by the Somerset line, but he's in no hurry to give up his carefree existence.Helena Banbury is a bookkeeper in a gentleman's gambling club, adept at analyzing numbers and accounts but helpless for lack of influence.

loved every second of it 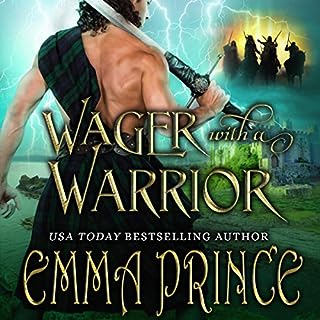 Gregor “the Black” MacLeod is on a mission. He has been tasked with raising an army to oust the Pretender King who usurped Scotland’s throne. But when he is met with naught but refusals, he must turn to his only asset - his brute strength. He spreads a wager through the Highlands - any man he defeats in single combat must pledge to stand against the Pretender. But when a bonny lass turns his challenge against him, he finds himself indebted to her service. Gregor intends to see his obligation through as swiftly as possible, but his heart may have other plans....

Loved every minute of it. I just couldn't stop listening. In fact I finished it in a day. I can't wait for the next one to come out, hopefully in December. I loved all the history in it. Love all Emma Prince's books. Tim Campbel was brilliant as usual. 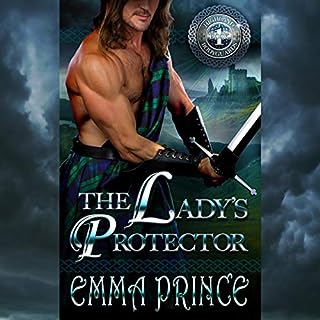 Ansel Sutherland is charged with a mission from King Robert the Bruce to protect the illegitimate son of a powerful English earl. Though Ansel bristles at aiding an Englishman, the nature of the war for Scottish independence is changing, and he is honor bound to serve as a bodyguard. He arrives in England to fulfill his assignment, only to meet the beautiful but secretive Lady Isolda, who refuses to tell him where his ward is. When a mysterious attacker threatens Isolda’s life, Ansel realizes he is the only thing standing between her and deadly peril.

Loved every second of it for the second time round. This is the first book of The Bodyguard series. I enjoyed it just as much as the first time and will be listening to the rest of the series. I love Tim Campbell's narrating. I love the way he changes his voice for each character. And the men's voices are to die for, really nice and deep. He also has a great feminine voice also. Note in to.o the next one of the series. 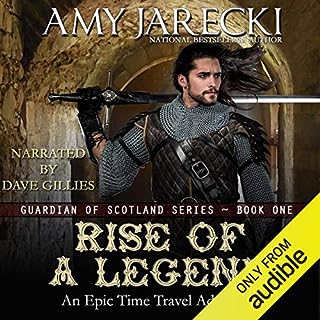 Running away from her catastrophic life, historical journalist Eva MacKay joins an archaeological dig at the battleground of Loudoun Hill. Unearthing the seal of William Wallace, Eva gains notoriety. But her dreams of Bowie knives, the weapon that murdered her husband, morph into great swords and dirks. Drawn to a ruined monastery, Eva drifts into the worst nightmare of all. Awaking to the sharp point of a madman's sword, she is hurled into the midst of a bloody 13th-century battle.

Loved every second of this story. This is the 2nd time im listening to this series and im enjoying it just as much as the first time and probably more as I am not rushing through it. I love this historical romance about William Wallace. Although of course the time travelling and his love affair weren't real, everything else about the battles was. I loved the narrator's voice for the male characters but not for the heroine it sounded as though she was crying most of the time, a bit too whiny for my liking. But Dave Gillies narrating brought the characters to life. Definitely worth a credit.
Now on to the next one which is going to be very sad. 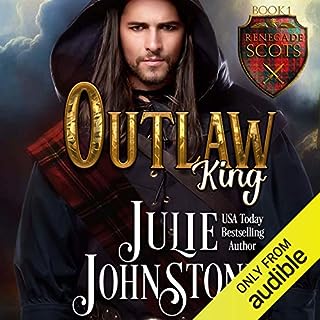 Dark days have come to medieval Scotland, and fierce warrior Robert the Bruce would do anything to release his country from English rule - and not just because he’s the rightful heir to the Scottish throne. As the bloody war rages on, enemies on both sides of the fight surround him, and Robert must dance a dangerous line between truth and deception. One misstep could topple his nation and cost him his life, yet one woman tempts him - and threatens his mission - as no other ever has.

Loved every second of it. Love stories with history. This is the second time I'm listening to this series and I enjoyed it just as much as the first time and probably even more Julie Johnstone is such a brilliant historical romance writer. I love her books. And combined with Tim Campbel as a narrator is the icing on the cake. Tim is such a brilliant narrator. When I look for books to listen to I first look for the author and then the Narrator, if I don't like the narrator then I won't buy it, so then I look for books by the narratorsl I like. This first book is 100 percent 5 stars on all counts.
Now on ro the next one. 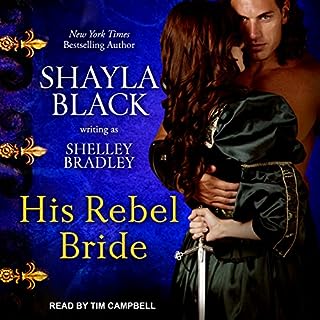 A reckless warrior, Kieran Broderick was half-Irish, yet bound to fight for the English crown. So when King Henry decreed that he take an Irish wife to quell rebellion there, he had little choice. Newly dubbed the earl of Kildare, Kieran travels to Langmore Castle, seat of the lawless O'Shea family, to choose a bride. When he picks Maeve, a fetching lass who seems sweetly submissive, he soon learns she's a fiery, clever woman. When she refuses to allow him into her bed or her heart, he finds himself fighting the most daunting battle of his life.

Maeve made me sick. Couldn't bare her much longer. She said that Keiran didn't deserve her love when I think it was the other way round. Kieran tried to do everything in his power and granted her something that was not even in his power to give but she never appreciated anything he did for her. All she thought of was herself and hers and the cause. She sure didn't deserve Kieran's love. He was so kind and loved and cared for her so much but everytime he got a slap in the face. She was awful till almost the end. I didn't enjoy this story because of Maeve, she was so awful. But I loved Kieran. Tim Campbel was brilliant as always. I love his narrating. I love his voice. 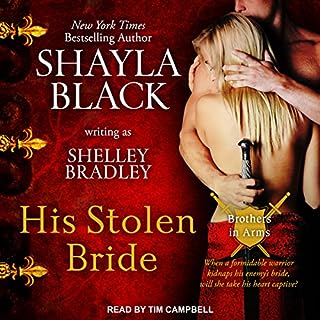 Wrongly accused of murdering his father, Drake Thornton MacDougall wanted nothing more than to strike back at his guilty, duplicitous half brother. So he made the fiend pay by abducting his bride-to-be. But as Drake carried his captive off to a windswept Scottish isle, he soon found that vengeance wasn't the only thing on his mind. Lady Averyl Campbell proved herself no biddable maiden but an alluring, strong-willed beauty who could tame his dark moods with her touch.

Loved every minute of it. I couldn't stop listening. The first book of the series was better as I love anything to do with real historical figures and real history in mm closed in the story. But I enjoyed this story very much. Definitely worth a credit. Tim Campbel was brilliant as usual. My favourite narrator. Now on to Kierans story.