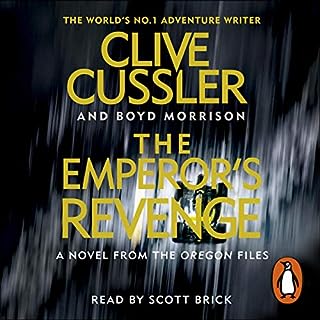 Juan Cabrillo and the crew of the Oregon face their toughest challenge yet when a violent bank heist during the Monaco Grand Prix decimates the Corporation's accounts. To get the money back, Juan joins forces with an old friend from his days in the CIA, so they can track down a rogue hacker and a ruthless former Ukrainian naval officer. It is only after the hunt begins that the enormity of the plan comes into focus: the bank theft is just the first step in a plot that will result in the deaths of millions and bring the world's economies to a standstill.

I am never disappointed with the plot points, storyline, narrative and character developments for this series.

For years was uncertain about Clive Cussler - I really needn’t have been! I’ve been binge reading him ever since book 1 and am slowing my pace, because I’m not sure how easy it will be to switch to his other characters.

This is a great high tech story and only looses 1star because of... well, you’ll find out...
Scott Brick is phenomenal! The ONLY person who can narrate an Oregon tale! 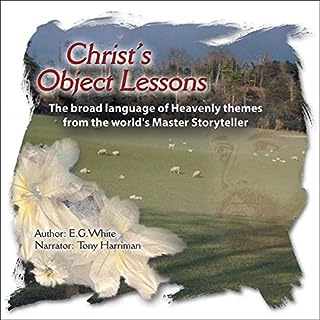 Perhaps the most popular book ever written on the parables of Jesus Christ. Enjoy the broad language of heavenly themes as you listen to the accounts of The Sower; Hidden Treasure; Pearls; The Prodigal Son. Listen as Jesus speaks of a Great Gulf Fixed between our earth and the life to come. Learn of a great banquet prepared for all who will attend, and of a wide spectrum of Talents to be given to those who will enlist in the Master's service.

I have been intending to read this book for many years, but hadn’t done so, this Covid-19 Pandemic has enabled me to do so! I should have done so sooner! It has really opened my eyes to the intent behind the parables that I thought I knew so well! This is an eye opener - well worth reading! 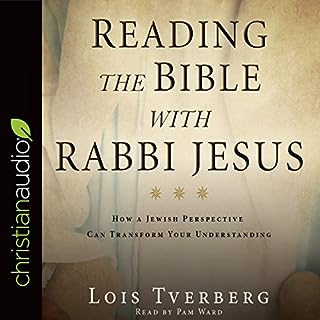 What would it be like for modern listeners to sit down beside Jesus as he explained the Bible to them? What life-changing insights might emerge from such a transformative encounter? Lois Tverberg knows the treasures that await listeners willing to learn how to see the Bible through Jewish eyes. By helping them understand the Bible as Jesus and his first-century listeners would have, she bridges the gaps of time and culture in order to open the Bible to listeners today.

Not Quite What I Expected...

I think that I was expecting a chapter by chapter in depth insight into BC2000 to AD150 (or whatever the timeline for the bible is! I’m at that level of cluelessness)! It wasn’t exactly that!

However, it WAS informative and I did learn a lot on just this first listen. This is a book that needs several passes through it, to fully gain an appreciation for it and the gems it holds.

My one nitpick. It’s personal and not objective: I don’t really like the narrators’ voice!! I find it irritating. I can kinda tune it out, but sometimes that makes it harder to follow. So I’ve bought the book as well, so that I don’t get distracted. So my recommendation is - buy the Kindle book first, and get audiobook at the reduced price, simultaneously. 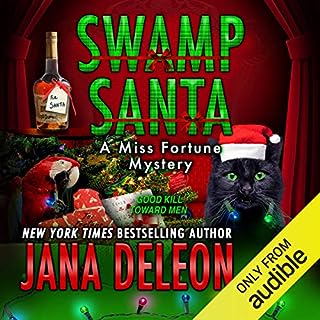 It's Christmas in Sinful and Fortune is set to participate in all the local hoopla. A Christmas gala, caroling, and a sleigh ride are on the agenda. Murder is not. But when someone bumps off Santa, Fortune is aware a killer is lurking among the holiday cheer. But with no client and no reason to interfere with a police investigation, it looks as if Fortune, Ida Belle, and Gertie will have to sit this one out.

Firstly. I know that it’s the same narrator - but somehow she sounds different and that threw me!
Secondly. Gertie is EXACTLY THE SAME! So be prepared to bust a gut! Celia also, but she doesn’t make a big impact this time around.
Thirdly. The story is great! The intricacies of the case is masterful, so once again, you have to hand it to Ms DeLeon for crafting a great murder/mystery with superb comedy and slapstick!

However, I MUST get the next book immediately!!! Oh goodness me! 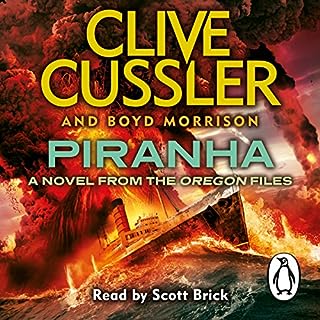 Penguin presents the unabridged, downloadable, audiobook edition of Piranha by Clive Cussler and Jack De Burl, read by Scott Brick. In 1902, Mt. Pelée erupted, sinking a ship carrying a German scientist on the verge of an astonishing breakthrough. More than a century later, Juan Cabrillo must tackle that scientist's legacy.

I don’t know how they come up with these ingenious, intricate. Seemingly unconnected stories! But this one, like it’s predecessors, certainly doesn’t disappoint!!

I’m also very glad that Scott B is back to narrating, the other fur on the previous story, was irritating and disappointing - he spoilt my enjoyment! Scott’s narration is superb! 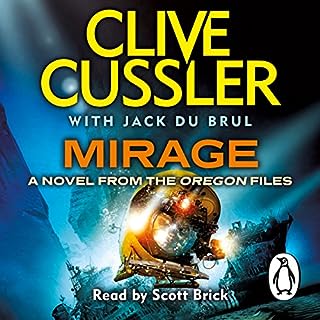 Penguin presents the unabridged, downloadable, audiobook edition of Mirage by Clive Cussler with Jack Du Brul, read by Scott Brick. In October 1943, a US destroyer vanished out of Philadelphia, the result of a Navy experiment with electromagnetic radiation. The story was considered a hoax - but Juan Cabrillo and his Oregon colleagues aren't convinced. Now, a new weapon is for sale - one linked to the great inventor Nikola Tesla, who was working with the Navy when he died in 1943.

I don’t want to spoil this, you can’t really write a review on the Oregon Files and not spoil something in your review, <sigh>…

We’re familiar with all of the characters now, there are no further character developments that I can comment on, other than that, the Nerds are their usual amusing selves and Jean, once again (or twice, or 3 times), tries to kill himself!

I love this series and I’m privileged to be able to read them back to back, having discovered it so late! 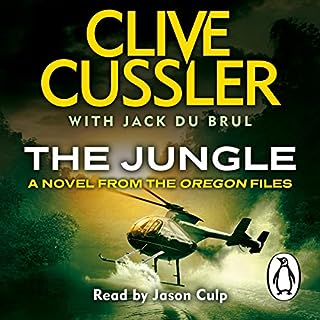 Juan Cabrillo and the crew of the Oregon have undergone many hair-raising adventures before - but never one quite like this. Jungles come in many forms. There are the steamy rain forests of the Burmese highlands. There are the lies and betrayals of the world of covert operations. And there are the dark and twisted thoughts of a man bent on near-global domination. To pull off their latest mission, Cabrillo and his remarkable men and women must survive them all.

Fascinating story, initially spoiled by Jason Culp’s narration - I prefer Scott B! But persevere, he turns out okish in the end. (Once he managed to get his breathing sorted out)! 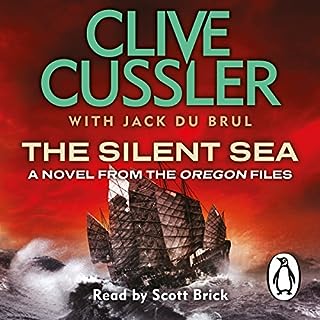 On 7 December 1941, four brothers exploring a pit on a small island off the coast of Washington state make an extraordinary discovery, only to be interrupted by news of Pearl Harbor. In the present, Juan Cabrillo, Captain of US spy-ship Oregon, chasing the remnants of a crashed satellite in the Argentine jungle, makes a shocking discovery of his own. His search to untangle the mystery leads him, first, to that small island and its secret, and then much farther back, to an ancient Chinese expedition, and a 500-year-old curse....

In my opinion, the previous novel was the best Oregon Tale in the series! But the concluding chapters of this, is just lovely!

I got bogged down with the technical aspects and details of this one, but it still couldn’t take away from the overall wonder of these gentlemen’s genius for telling a great tale! 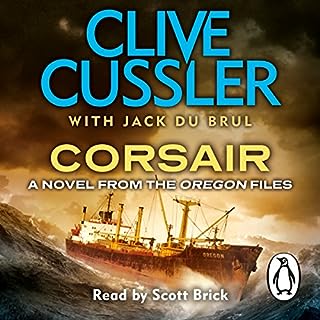 Over five novels, Clive Cussler has brought readers into the world of the Oregon, a seemingly dilapidated ship packed with sophisticated equipment, and captained by the rakish, one-legged Juan Cabrillo. And now the Oregon and its crew face their biggest challenge yet. Corsairs are pirates, and pirates come in many different varieties.

There was only ONE paragraph of this book that I didn’t like: SPOILER ALERT _*********
The female archaeologist spit at

someone, the repercussions of
which, were totally avoidable, if
she HADN’T done so! It left a bad
taste in my mind, heart and soul. I
couldn’t like that character after that!

The finale was amazing and astounding! 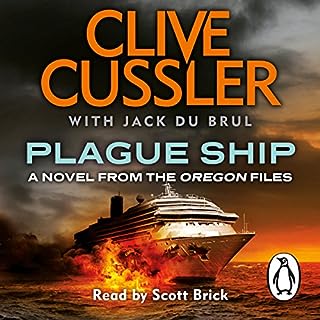 For four novels, Clive Cussler has charted the exploits of the Oregon, a clandestine spy ship completely dilapidated on the outside, but on the inside packed with sophisticated weaponry and intelligence-gathering equipment. Captained by the rakish, one-legged Juan Cabrillo and manned by a crew of former military and spy personnel, it is a private enterprise, available for any government agency that can afford it - and now Cussler sends the Oregon on its most extraordinary mission yet.

I’m reading this in 2020, when we ate even more aware of the effects of Global Warming. The previous novel was So Close in the current world view (not necessarily the political world, who are still dancing around the issue), that it was scary!

Now this novel, tackling another global issue, equally as sensitive and eerily scary, comes around and makes me think that this could be the next Red Flag - overpopulation!

These 2 men have transformed my reading habits over the past 2 months, I’ve devoured all 5 books In this timeframe. Exciting, adventurous, and thought provoking, I hope that there are very many more to come! Scott Brick does a fantastic job in bringing these stories to life!