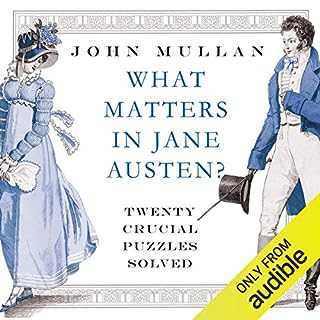 In What Matters in Jane Austen?, John Mullan shows that we can best appreciate Austen's brilliance by looking at the intriguing quirks and intricacies of her fiction. Asking and answering some very specific questions about what goes on in her novels, he reveals the inner workings of their greatness. In 20 short chapters, each of which explores a question prompted by Austen’s novels, Mullan illuminates the themes that matter most in her beloved fiction.

Mullan establishes up front that his goal is to explore historical context and the linguistic theory associated with Austen's oeuvre... but he happily dismisses the significance of feminist (and presumably other theoretical) readings of same, so proudly that you just know he was the guy on the Literature 101 course who memorised every theoretical term and definition in the course documents and volunteered boring, by the book responses in every discussion.

At one point he starts to get close to addressing what later readers found in the texts... and side steps that entirely.
Austen wrote novels, not puzzles, and Mullan doesn't seem to care about teasing out reader response at all.

While I found it smug, didactic, and reductive, this research is absolutely impeccable and well organised, and I imagine extremely useful for academic work (though with this audio version I can't get a look at any bibliography).

Sadly Paul Collins sounds like he was generated by Google, extremely disinterested in the text. Something a little disingenuous about being told about Austen by two men... can't think why. 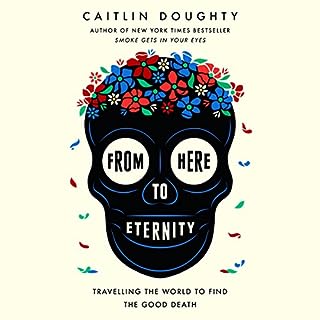 As a practising mortician, Caitlin Doughty has long been fascinated by our pervasive terror of dead bodies. In From Here to Eternity, she sets out in search of cultures unburdened by such fears. In rural Indonesia, she observes a man clean and dress his grandfather's mummified body. She meets Bolivian ñatitas (cigarette-smoking, wish-granting human skulls) and introduces us to the Japanese ritual of kotsuage, in which relatives use chopsticks to pluck their loved ones' bones from cremation ashes.

I can't imagine Caitlin's words being read by any narrator but her. She's so passionate about the cause of death positivity and acceptance, seeing unusual death cultures around the world from her perspective was a great listen and I really recommend this book. 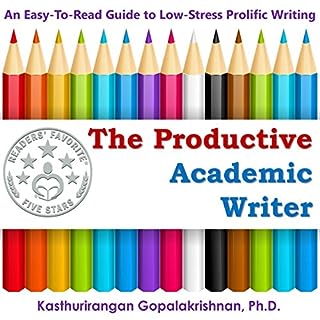 Having played the role of a student, postdoc, researcher, research faculty member, author, reviewer, and editor, Kasthurirangan "Rangan" Gopalakrishnan, PhD, fully understands and empathizes with the struggles and pleasures of academic work. In this book, his goal is to assist you to do what you are already doing more effectively and efficiently with minimal stress and possibly to identify and eliminate those activities and habits that interfere with your academic writing productivity.

Gopalakrishnan isn't saying anything brand new or groundbreaking, and chances are you've heard most of the advice before, but there are a lot of resources here, collated succinctly. It's sometimes nice to hear the words "you're not perfect, but here's how to do your best", even when you're supposedly among the most highly educated people in the world. 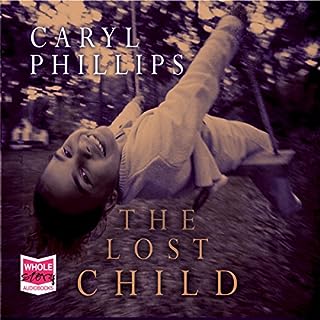 A sweeping story of orphans and outcasts, haunted by the past and fighting to liberate themselves. At its centre is Monica Johnson, cut off from her parents after falling in love with a foreigner, and her bitter struggle to raise her sons in the shadow of the wild moors of the north of England. Intertwined with her modern narrative is the ragged childhood of Emily Brontë’s Heathcliff, the antihero of Wuthering Heights and one of literature’s most enigmatic lost boys.

Out of the way first, Julia Franklin puts in a good attempt, with what are clearly well-practiced accents and voices, but poor, hissy mic and an inattentive editor who clearly let a lot of mispeaking errors slide totally let her down.

For the novel, Phillips presents an ill conceived pastiche on Wuthering Heights which fails to really get going or stop being anything but utterly miserable.

Every time I came away from this one, I was always in a really foul mood.

My favourite critiquing rule of thumb is this "stupid on purpose? stupid by accident? who cares, it's still stupid"... Just switch the word stupid out for 'depressing'. 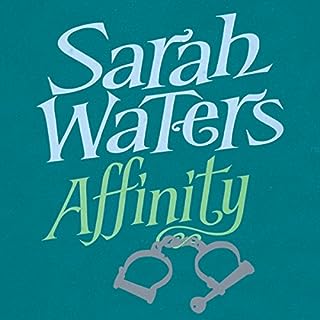 Set in and around the women's prison at Milbank in the 1870's, Affinity is an eerie and utterly compelling ghost story, a complex and intriguing literary mystery, and a poignant love story with an unexpected twist in the tale. Following the death of her father, Margaret Prior has decided to pursue some 'good work' with the lady criminals of one of London's most notorious gaols. Surrounded by prisoners, murderers, and common thieves, Margaret feels herself drawn to one of the prison's more unlikely inmates.

Affinity is on my Masters reading list, and I decided to get the audiobook and save myself some time trying to fit the reading into my day - really worth it. MacMahon has a real knack for finding each character's voice, and really brings Waters's words to life - going to have to take some time to process that ending though!