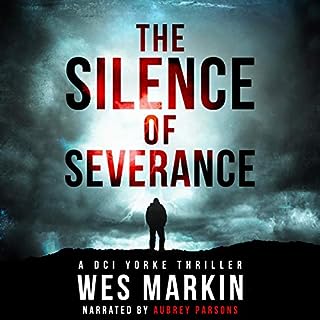 When a police officer’s wedding day ends in brutality and chaos, DCI Michael Yorke is pulled away from his own wedding and into the bloodiest chain of events Wiltshire has ever seen. As a heatwave tightens its grip on Salisbury, Yorke and his team face a race against time to find the most sinister and intelligent adversary they have ever faced. Christian Severance. But as the team chase Severance into the shadows of a dark past, Yorke’s own history starts to drag itself into the present.

Wes Markins writing gets better and better. DCI Michael Yorke and team really are at full stretch with this baffling case with all it's twists and turns. The narrator brings it all nicely to life as we, the listeners, are fully immersed in a roller coaster ride. Very enjoyable. 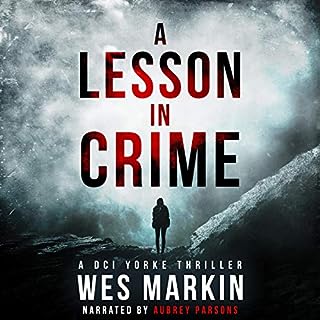 Your student years should be the most carefree years of your life. Not for Michael Yorke. When a student party ends in violent murder, Michael Yorke begins to realise he harbours a fascination with crime which goes way beyond the norm.

A Very Short But Interesting Story

This packs a lot into a one and a quarter hour audiobook. It sets the backstory for the DCI Yorke crime novels. Great narration compliments the writing. I'm not a fan of short stories and feel this could have been incorporated as part of a full novel, perhaps as a flashback. 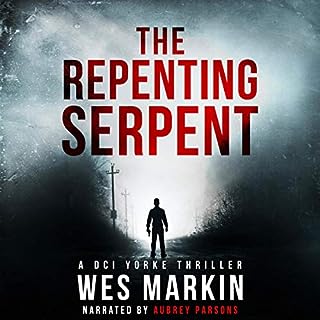 A vicious serial killer slithers from the darkness, determined to resurrect the ways of a long-dead civilization. When the ex-wife of one of DCI Michael Yorke’s closest allies is left mutilated and murdered, Yorke and his team embark on their greatest test yet. A deeply personal case that will push them to their very limits. And, as Yorke’s team are pulled further into the dark, the killer circles, preparing to strike again.

This is a very nicely paced crime thriller with excellent characters and great twisty plot. The narrator brings an extra dimension and enjoyment. DCI Michael Yorke is proving to be an interesting individual in this his second outing in a novel. For me this has all the ingredients of what I want in my crime fiction. Great writing. 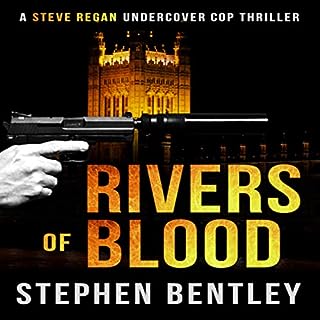 There’s only one thing more dangerous than becoming a confidential informant. Being an undercover cop. They have something in common - living on the edge. Steve Regan is still undercover working for the same UK secret government department. He sets off on what he thinks is a last assignment: seconded to the Australian Feds posing as a hit man hired to assassinate a liberal Australian politician.

On The Edge, Undercover.

When the task needs the very best undercover cop Regan is top of the list. He's seconded to Australian law enforcement to nail a big player for them before being given the onerous task, back in the UK, of infiltrating a white supremacist group within the police force itself. The tension is high, the stakes become personal to Regan and his loved ones. Fast paced with great narration. I think it should have been a longer story to fully take advantage of the potential. 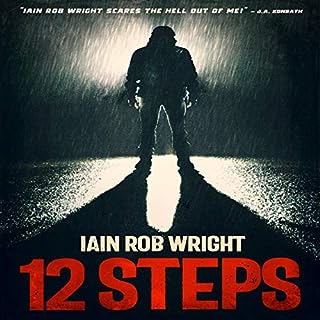 Adam lost his entire life to alcohol, but tonight, he is one year sober. While he never expects to be happy ever again, he is at least back in control of his life. That is, until a ghostly face appears at the window and turns his world into a nightmare. Now, the only people he can rely on are his fellow drunks, and some of them are keeping secrets.

A Meeting Turns To Horror.

A group of alcholics encounter far more than their weekly confessions at a meeting. Based around a tragic accident in the past revenge is delt out in scenes reminiscent of the best horror movies. Through excellent writing and superb narration events are brought fully to life for the listener. This is not for the sqeamish and is a very engaging tale. I thoroughly enjoyed it, with the lights on. 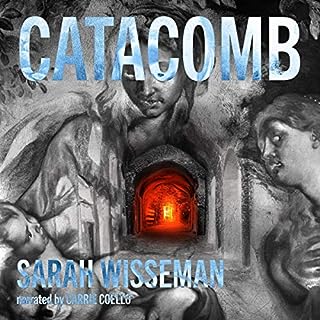 Art conservator Flora Garibaldi is just getting the hang of her new job restoring paintings in Rome, Italy. Then, her policeman boyfriend, Vittorio Bernini, asks her to join a risky search under Rome for a lost trove of Nazi-looted art worth millions. Along with an international team of art experts, they face the daunting task of locating art in miles of underground tunnels.

Flora has hardly settled into to her new job when she is asked to assist in the tracing of a hoard of WW2, Nazi looted, fine art, somewhere in the catacombs of Rome. This is fast paced, full of intrigue and mystery, with a cast of intriguing characters. A murder is added to the mix making this an excellent listen, especially as the writing and narration are very good. 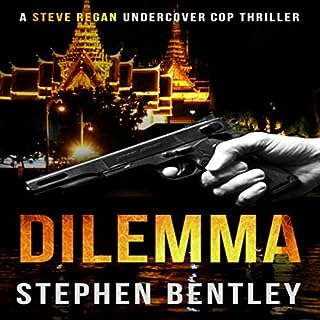 Steve Regan is back, and this time, he’s alone and undercover in a seedy area of Thailand on the trail of a Texan expatriate, Les Watkins, the biggest drug smuggler in South East Asia. Using himself as the bait, Regan attempts to score a $50,000 deal with the Thai mafia to get closer to his target. As he finds himself embroiled deeper into the operation, Regan suspects Watkins may be connected to Regan's nemesis, ruthless Mafia boss Carlo Vitale, who has fled the United States following a triple bombing and assassination of three crime family heads.

Reagan Fights For His Life In Thailand.

Reagan is deep undercover in Thailand trying to get to the Texan Mr Big of the South East Asia illegal drug business. He has everyone out to get him when plans start to go amiss. Reagan has to use every ounce of his inginuity and guile to stay alive. The pace is fast, narration excellent, with a plot continually twisting and turning. There's even a love interest for Reagan with a Thai character every bit his match. I wish it could have been a full novel. Another installment will be brilliant. 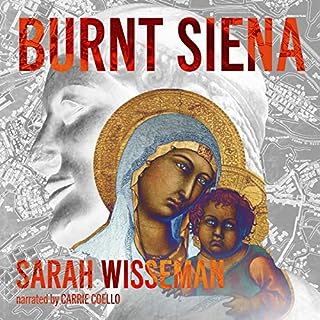 In the magical and historically rich city of Siena, Italy, old paintings are as common as cobblestones. But what if some of those paintings are forgeries? And what if your employers at Restauro Lorenzetti, a respected firm of art conservators, might be smuggling antiquities? After colleague and roommate Ernst Mann is found dead in the street below their apartment balcony, Flora Garibaldi suspects her bosses are crooks. The Italian police, after ruling Flora innocent of murder, persuade her to spy on her employers.

Murder And Intrigue In The Italian Art World.

Siena, Italy, is the location for this murder mystery set in the world of fine art restoration, forgery, theft, family intrigue and loyalty. Nicely paced with great attention to detail and characterisation the plot twists and turns to its rewarding conclusion. The narrator does a great job in aiding the listerner experience. Very enjoyable. 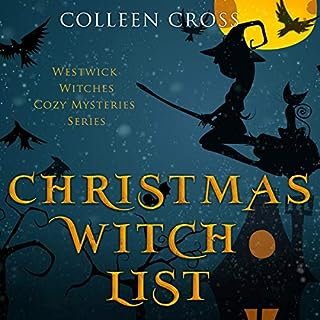 Cendrine West is looking forward to a cozy Christmas Eve dinner when a blizzard blows in, bringing with it a flurry of unexpected guests. But tipsy witches and mischievous magic spell a recipe for disaster, especially when a guest turns up dead. Cen’s sleuthing exposes a Santa-size sack of trouble, and everyone’s a suspect, even her hunky sheriff boyfriend. Is it a deadly accident by a drunken witch...or something more sinister? Murder is on the menu, and only magic can uncover the truth in this witchy, wacky Yuletide thrill ride!

When Things Don't Go To Plan.

A cozy and quiet Christmas Eve is planned at the West's household but then the snow storm hits, unexpected guests arrive and someone is poisoned. Cendrine's plans are in ruins and she has a potential murder to solve. This is a great fun story with lots of twists as we follow the witches as they help and hinder the proceedings. Narration helps the listerner with the enjoyment of the whole experience. Enjoy. 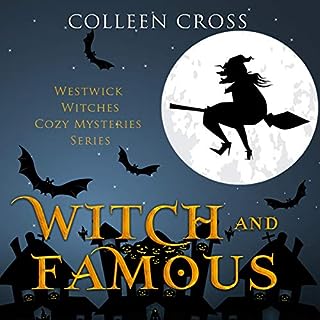 A Hollywood movie shoot comes to town and journalist Cendrine West is eager for a scoop. Her witchy family also wants in on the action, but shenanigans with the stars soon turn to Tinseltown tragedy. Bodies are piling up faster than a coven's worth of curses, and everything points back to Cen's starstruck family. They will stop at nothing in their quest for supernatural stardom, even if that means meddling in a murder investigation. The witches have created one spell of a mess and given the killer a chance to get away with murder.

Westwick is buzzing as Hollywood comes to town in the guise of a top director and film crew. Cendrine's witch family wants stardom, very badly, so witchcraft is afoot as events start to turn nasty. Cen, trying to get a scoop for her newspaper, is in the middle of it all and her partner, the Sheriff, is trying to solve the crimes. Very nicely written with plenty to keep the listener entertained. The excellent narration makes this a thuroughly enjoyable audiobook.