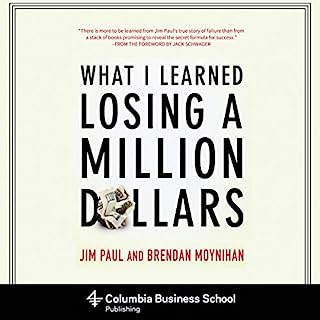 Jim Paul's meteoric rise took him from a small town in Northern Kentucky to governor of the Chicago Mercantile Exchange, yet he lost it all - his fortune, his reputation, and his job - in one fatal attack of excessive economic hubris. In this honest, frank analysis, Paul and Brendan Moynihan revisit the events that led to Paul's disastrous decision and examine the psychological factors behind bad financial practices in several economic sectors.

Interesting but could be summarised in a page

The book jumps around and is disorganised. The style annoying, the performance grating.

I like the premise - focus on not losing money. That fits nicely with Buffet’s maxim. In addition, I like the idea of going in with an exit plan.

I also like his point that some people are lucky fools, and just don’t know it. Successful by a random walk.

However, there seems to be an inherent contradiction in his solution. He points out that the stock market is continuous, so opportunities for entering/exiting are never ending, but advocates countering that by planning point max win/losses before a trade, and not adjusting afterwards.

I see the logic there. Don’t make it up as you go along based on emotion. However, the contradiction is that in a continuous market, things change, so shouldn’t the plan change? Bayesian logic?

Say you invest in an airline stock on the assumption that a short lived union dispute will blow over e.g. Ryanair. But then the Boeing Max disaster happens and the airline cannot get delivery of planes. So if the union dispute is resolved, but rather than going up, the airline stock declines because it’s still waiting for its new fleet to be delivered / compensation from Boeing, would you still get out based on your initial acceptable loss imagined occurring during the trade dispute? Or hold on, assuming the stock will recover on delivery of the planes? He seems to suggest getting out because changing plans mid-way could like ego take over. I see the logic there, there is no attachement or emotion. However, at the same time, this seems like mechanical algorithmic day-trading rather than value investor mentality. You would put yourself at a disadvantage to other traders who can process new info. I couldn’t see Buffet selling based on a set decline without considering the new information, or the value of the underlying asset.

This strategy might also mechanically (rather than emotionally) get you out of the stock market on days like Black Friday, when possibly riding the storm would make more sense. In particular, in index funds.

Overall, he makes some good points. But I’m not sure if he addressed the core of his own loss - he bet everything he owned and more on a single short/options position... Limited upside, infinite downside. Deciding how much he could lose on that trade could have prevented that catastrophe. But so would other things like diversification, circle of competence, only investing in what you really understand etc.

Overall, interesting, but too long winded. 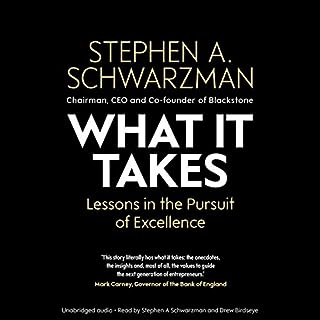 From Blackstone chairman, CEO and cofounder Stephen A. Schwarzman, a long-awaited book that uses impactful episodes from Schwarzman's life to show listeners how to build, transform and lead thriving organisations. Whether you are a student, entrepreneur, philanthropist, executive or simply someone looking for ways to maximise your potential, the same lessons apply.

Interesting in parts, but far too narcissistic

Having read Ray Dalio’s Principles, which I thoroughly enjoyed, I came across this, which I thought might be similar. I didn’t know much about of Schwarzman himself, though I had heard of Blackstone.

However, I was fairly disappointed with the book for the most part. Don’t get me wrong, some parts are quite interesting - for instance, the background to the Financial Crisis, and he does give some good advice at times. However, although he seems like a genuinely interesting, and creditworthy individual, I found the constant name dropping, ego building, and self-praise nauseating to listen to.

On top of copious self-praise, he also makes asides, which don’t take directly take credit for things, but kind of indirectly imply that credit might be deserved. For instance, I gave advice to Secretary X on what he should do about the economy, the next day the market bottomed out.

Also, although he deserves credit for his charity work - he has donated a lot. Reading about it, I contrasted his approach to philanthropy with Buffet’s. Buffet has donated billions to a Foundation named after someone else, while Schwarzman must have a small town’s worth of buildings named after him at the stage, some of which he only funded a small part of. Even the Schwarzman Scholarship program is only partially funded by him (Dalio alone donated at least a quarter of what Schwarzman himself did), but solely named after him in perpetuity. The detailed descriptions of all those things seemed like simply self-praise. It kind of makes you wonder how much was for charity and how much was to have his name mentioned in the same breath as Rhodes. There’s probably a principle in there on maximising marketing value through leverage.

Maybe I’m not seeing the forest for the trees, but I found this more of a book which listed his achievements, interspersed with good advice and principles rather than the other way round.

An abridged version would be much more valuable, at least to me. The principles themselves are valid, but summarised in a 10 minute segment at the end.