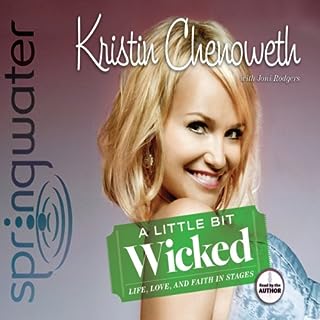 In this frank and funny memoir, the Tony Award-winning star of stage and screen shares her journey from small-town Oklahoma to big-time Broadway, vamping on what it takes to stand firmly on a foundation of family and faith while wearing a hot pair of Jimmy Choo platform sling-backs.

Witty and funny with a great insight into the arts

Where does A Little Bit Wicked rank among all the audiobooks you’ve listened to so far?

It is not a sci-if dramatic read by any sorts like I usually get, but I have an interest in dance and the arts, and I have seen the musical WICKED. This book oozes personality, charisma and is light hearted fun.

I liked the way that life experiences have been given a positive outlook. This is not a trait strongly known for British people like myself and it is inspiring to hear. I liked that the book had a LOT of content and details into the authors life. At times there was me,an holy and sadness which was noted but not described. Sometimes she wants to keep some personal things private which is a testament to the people in her life that she wants to speak about in her story, but not to expose them in any negative way.

The snippets about her singing teacher in her early days

I don't particularly like chick flicks or love stories so this was my alternative. For anyone interested in Broadway or dance or singing or to personalities this would be great for you. It is inspirational written from a woman's perspective for women and girls everywhere. Although the journey is not 100% relatable (not all of us get to be Broadway stars), the life lessons learnt and the personal journey is very much so. 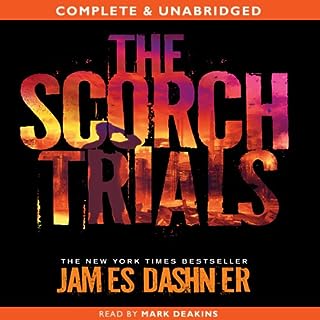 The pulse-pounding sequel to The Maze Runner. Thomas was sure that escape from the maze meant he and the Gladers would get their lives back. But no one knew what sort of life they were going back to. The earth is a wasteland. Government and order have disintegrated and now Cranks, people driven to murderous insanity by the infectious disease known as the Flare, roam the crumbling cities hunting for their next victim - and meal.

So much better than the first story!

This story progresses with the core characters from the first book. They journey to the Safe Haven, sometimes together, sometimes apart or in various combinations. Thomas's personal issues are mainly piecing his memories together and finding Theresa. The tattoos that each person in the story has on their necks makes us as listeners constantly see whether characters step up to the given role, contradicts it or if the title given plays true to their personalities already (perhaps without us realising it until it was established in the story).

Throughout the story the characters jest in saying 'expect anything', and as a listener you wonder 'what else can possibly happen in this story that could intensify or out-do previous plot twists or events?'. The answer is a LOT! Particularly the Theresa/Thomas plotline. To me it is clear the WICKED set Theresa's task in order to split her and Thomas up in order to make whatever future plans they had easier to follow through with those to as enemies.

There are a lot of references to the past events which make the story richer and more layered. Sometimes by comparing past events and feelings with what the characters are facing (and to expand on those feelings that the listeners had eperienced through the previous narrative, particularly the Chuck story and the Ben reference made to when the gates closed and he was forced into the maze in the story earlier on).

I didn't really get the depth of the first story and thought that on some levels that the characters were flat due to the amount in the story. However through blitzing through the second story I have realised this; this series is a bit like falling asleep in that you're listening whilst washing the dishes then BOOM!! It's 4 hours later and all you've done is sat on the sofa and listened to this engrossing adventure. It is truly brilliant that an author can do that. Given the number of key characters I salute the reader Mark Deakins, he did a brilliant job!

There is a lot more imagery in the book than before, and throughout I could visualise the scene as if it were a film. However I have a couple of ideas about what Thomas might look like. That adds another level of imagination to the enjoyment of listening. I am really invested in the characters. This is a story about people and their emotions, heightened by not knowing what lies ahead and just 'winging it' with skills gained form the maze. I have no idea what will happen next, but feel like the final book entails a big reveal of some sort, with some hint that the memories will be restored. However I doubt that will be the case as so far Dashner has revealed the facts piece by piece, taking us hand in hand with Tom's thought process and feelings.

I cannot wait for the final book, once I have written this review I am getting on it!

the way that past experiences/new memories shaped the main characters. Introducing new characters made the story fuller in terms of the Gladers and their 'game plan' to get to the safe haven.

the accents, the characters emotions and the ease of switching between characters in conversation

My imagination spread like wildfire. As the story progresses I feel protective about the character of Tom. Initially I thought he was a medium for describing the new experience and seemed like a small character. But in Scorch Trials the emotional reactions of the character surprised me at times. Then on other occasions I thought 'that's exactly what he would do'. In the pods where the 4 lifted the lid particularly. I didn't like the part where he had to choose which if the 2 characters were to die. I think that he should believe Theresa because his feelings are clearly rooted there. However it might be a trick as Thomas hinted. I'm not sure, but I'm interested to see where that goes.

The encounter with those highly infected with the flare and wanting to eat noses would be a brilliant scene for a film version. Although the description was disturbing it achieved its desired effect. 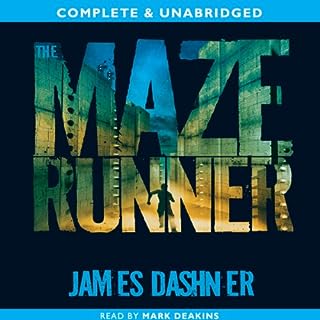 When the doors of the lift crank open, the only thing Thomas remembers is his first name. But he's not alone. He's surrounded by boys who welcome him to the Glade - a walled encampment at the centre of a bizarre and terrible stone maze. Like Thomas, the Gladers don't know why or how they came to be there - or what's happened to the world outside. All they know is that every morning when the walls slide back, they will risk everything - even the Grievers, half-machine, half-animal horror that patrol its corridors, to try and find out.

Yes I would because book recommendations are often the best books I have read. This book particularly was told in an interesting way. The series of events were often jumbled but seemed to occur in a full cycle, giving a broader perspective to an apect of the story.

Alter to a first person perspective and describe the inter-personal relationships further. It did not have enough emotional connection or intensity compared to other stories I have listened to. The greevers were not overly described, it seemed like the description was only repeated, other than describing how they sounded. I could not imagine what they looked like very well.

Have you listened to any of Mark Deakins’s other performances? How does this one compare?

No I have not, but as a first time experience I reaqlly injoyed it. The accents added a great dynamic to the storytelling and weren't ridiculously exaggerated or inaccurate.

At the point of the story where Minhau and Thomas were in the maze and the greevers chased them into the corridor. The boys stood in the doorway to the edge of the cliff. At the last moment they pushed each other apart and the greevers fell inot the abyss.It was the best moment because I could visualise it clearly. Their reaction to the event was very detailed.

I was recommended this story by a friend. They said that as a fan of the hunger games I would like it. It was enjoyable and the plot swiftly progressed. I have mentioned about the description perhaps needing more depth, however as there are so many events in the story it may loose the momentum by adding that in. I wanted the story to continue and will be getting the next book to see what happens next with Thomas and the Gladers.

For people wondering whether or not to read this I would say YES, also making the point that this is more similar to the writing style of the Phillip Pullman (he wrote the Golden Compass series) rather than Suzanne Collins (she wrote the hunger games series).

The story is packed with interesting characters, twists and turns! Kept me intrigued throughout (apart from the first chapter, but I was half asleep on a plane when I began listening to it so that may have influenced that). Enjoy!