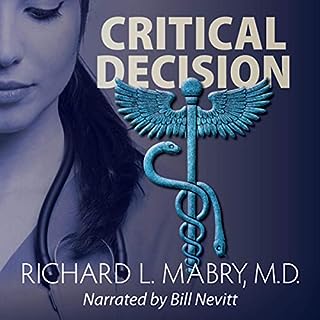 The box contained a cell phone, which rang as soon as she opened the package. A voice that called Dr. Kathy Hoover by name said that her husband had been kidnapped. To get him back, she would have to poison one of her patients. At first, she didn’t believe that her husband had been taken from the conference he was attending, but soon she discovered that the kidnappers really had Darren. If she wanted to see him again, she had to give medication that would murder Kelton Rush, former Vice-President. What was she to do? How would she handle this critical decision?

Another great book from Richard Mabry. The story always feels very authentic and I love the obvious medical expertise in the way he writes about the doctors experiences. Also I’m biased as Bill Nevitt is one of my favourite narrators and his tone on audiobooks I just love so this who audio did not disappoint. 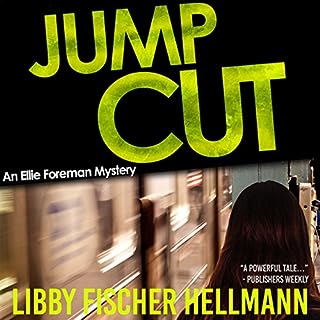 Hired to produce a candy-floss profile of Chicago-based aviation giant Delcroft, Ellie is dismayed when company VP Charlotte Hollander trashes the production and cancels the project. Ellie believes Hollander was spooked by shots of a specific man in the video footage. But when Ellie arranges to meet the man to find out why, he is killed by a subway train before they can talk. In the confusion, she finds a seemingly abandoned pack of cigarettes with a flash drive inside that belonged to the now-dead man.

Ok so it’s about time Georgia Davies and Ellie teamed up as PIs as poor Ellie is always being dragged into this dangerous situations. This story is great as always and it’s nice to see her love life finally going in the right direction. 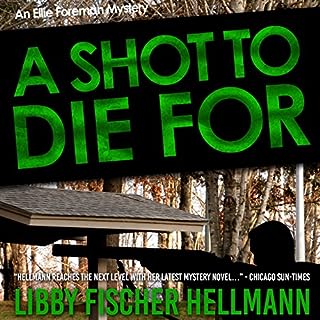 Returning from a video shoot at the Lodge, a newly renovated, upscale resort, Ellie Foreman befriends a woman who claims her ride abandoned her at a highway rest stop. But Ellie's kindness is brutally cut short when a pickup truck pulls up, the rear window opens, and the woman is shot dead. Even with her history of sleuthing, Ellie is not eager to get involved. Then the victims' family arrives and begs for information. When the second shooting occurs, Ellie decides to poke around on her own.

Loved this one. Ellie is at it again being dragged into trouble no matter where she goes but this time she is just in the wrong place at the wrong time but yet again ends up becoming a private investigator to find out what has happened. Along with this Ellie has to decide what to do about David or is someone else on the horizon. It’s about time Ellie became a PI now instead of a film maker. 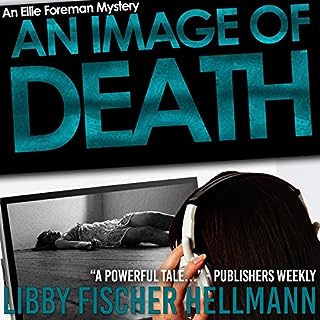 An Image of Death sees Ellie in the midst of producing another video documentary, financed by a successful Chicago real estate developer. But things take an unexpected turn one winter night when a mysterious package arrives anonymously on Ellie's doorstep. Inside, she finds a surveillance video apparently showing the murder of a young woman. Who was the victim, why was she murdered, and what is her connection to Ellie?

Ellie’s is in trouble again

Another exciting story poor Ellie I don’t know why she even takes on these stories as she always ends up getting mixed up in something and this time David is breaking her heart as well. Good audio though with an exciting story. 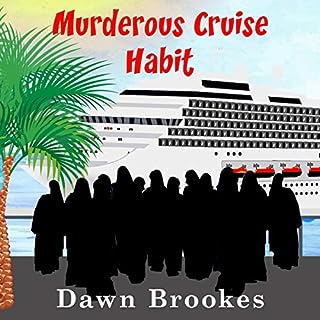 Rachel Prince once again joins the Coral Queen for the holiday of a lifetime with her octogenarian friend Lady Marjorie Snellthorpe and her parents. One day into the voyage and a nun who is part of an exclusive religious party collapses. It's not long before the death is seen as suspicious. The chief of security, Jack Waverley, is flummoxed by the case and asks Rachel to assist. All is not what it seems with this religious order and the woman's dying words are a cause for concern.

Another great story this time Rachel is bringing her parents along for the ride and as always in typical Rachel bad luck a murder takes place this time of a nun. As Rachel gets dragged into an investigation whilst trying to ensure her parents don’t know about her run of bad luck on cruises she gets drawn into a scary mystery and is again putting her life in danger to find out the truth. Honestly if Rachel Price is booked on your cruise cancel but that being said these stories are great fun. 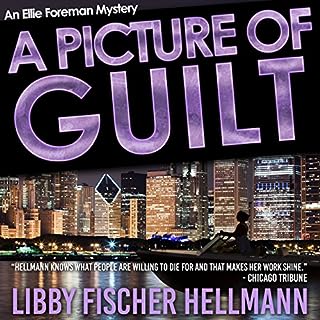 The big news story in Chicago is the murder trial of Johnny Santoro, a dock worker whose girlfriend has been killed. Most Chicagoans are betting on a quick guilty verdict, but Ellie Foreman has doubts about his complicity - Santoro is strangely familiar to her. Checking back to the outtakes of a video project in progress while the murder took place, Ellie finds evidence that could save Santoro from a lifetime behind bars.

Ellie’s in danger for trying to tell the truth

After testifying in the defence of Johnny Santoro after finding evidence to prove his innocence but due to interference being found on the evidence Johnny is convicted. Ellie’s life then starts to spiral out of control as she catches the eye of the mob and the FBI and it seems she may be in danger as well as she tried to get to the bottom of what happened to her evidence and why they are trying to shut her up. 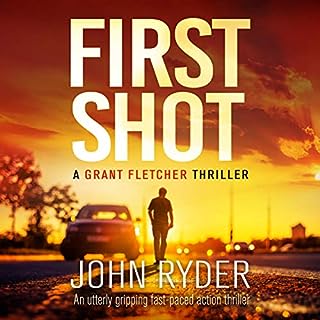 “When girls go missing here, no one says a word"...Twenty-four year old Lila has disappeared without trace. It’s the kind of case that ex-military loner Grant Fletcher would normally be happy to take on - he will always seek justice if someone has the money to pay him. But this one he’s doing for free. This one’s personal. She last called her father from a small town called Daversville, in rural Georgia. A place - Fletcher discovers as he checks into the only motel - where folks are proud to keep themselves to themselves.

An enjoyable audio from a new author for me this week. An exciting crime thriller and which starts off with girl going missing outside a dinner. What follows is a mystery when Grant Fletcher starts investigating he discovers the missing girl is the first of a number of missing girls who no one seems to have missed until now. As he risks his life along with a local detective to find out who is behind it and if any of the missing people are still alive her delves into a dark and twisted world of crime which would turn the strongest of stomachs. This is an exciting audio and a strong story. 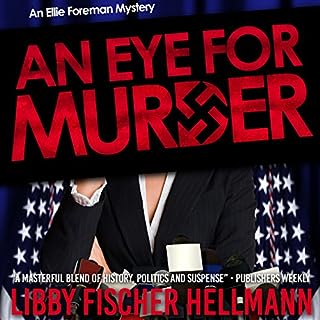 August 1944. Prague is where the story begins, with a seemingly casual exchange. But in wartime, is any act, any one thing, trivial? Decades later, in contemporary Chicago, the consequences emerge through the medium of television. Documentary filmmaker Ellie Foreman gets a letter prompted by the success of her show Celebrate Chicago. One viewer was the elderly Ben Sinclair. When he suddenly dies, his landlady, Mrs. Fleischman, finds Ellie's name among his effects and writes to her.

I really enjoyed this audio. It was an exciting political thriller spreading from the nazis to present day. I loved the story line and was pleasantly surprised by this one as it wasn’t the usual series I listen to from Libby. 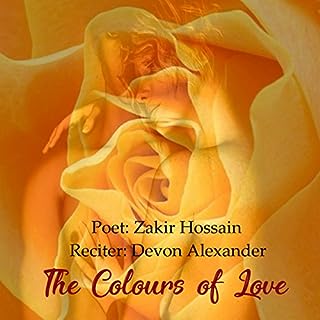 A man and a woman fall in love with each other, often mysteriously. Real love is a mysterious phenomenon indeed. The poems in this audiobook take us through many stages of a man-woman love affair, many colors of it. Here, the expressions of love have been portrayed in many different styles of poetry. This is an audiobook of poetry of love, romance, and lust. 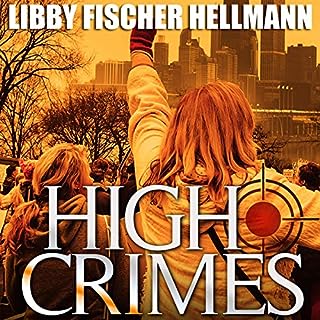 How do you solve a murder when there are 42,000 suspects? That’s the task facing Chicago PI Georgia Davis, hired to hunt down those behind the assassination of resistance leader Dena Baldwin at a demonstration 14 months after the 2016 election. The gunman, on a nearby hotel rooftop, dies within minutes of the shooting. As Georgia sifts through Dena’s 42,000 Facebook followers, she discovers that unknown enemies hiding behind fake profiles have infiltrated the group. She finds others who will do whatever it takes - including murder - to shield right-wing, wealthy elites.

Another great exciting Georgia Davis novel this time investigating an assassination of the leader of a protest group shortly after the 2016 election. As Georgia puts her life and freedom on the line to investigate the group will she get to the bottom of who by and why Dena Baldwin was killed? Alongside the investigation she also has to deal with the sudden reappearance of her mother who had abandoned her as a child.