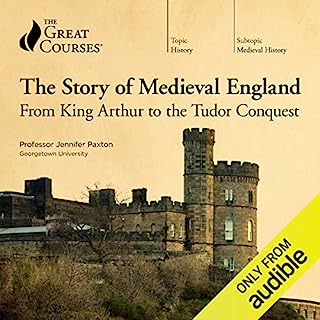 These 36 lectures tell the remarkable story of a tumultuous thousand-year period in the history of England. Dominated by war, conquest, and the struggle to balance the stability brought by royal power with the rights of the governed, it was a period that put into place the foundation of much of the world we know today. As you journey through this largely chronological narrative-occasionally interrupted for lecture-long explorations of specific topics-you'll see key themes emerge, including the assimilation of successive waves of invaders, the tense relationship between kings and the nobility, and the constant battles over money and taxation. And because so much of history is driven by specific individuals and not just historical circumstance, each lecture is rich in intimate portraits that reveal those individuals at the key moments of their historical destiny, including Alfred the Great, William the Conqueror, Eleanor of Aquitaine, and John Wycliffe.The result is a lecture series that winds up being not only informative but deeply entertaining, with each lecture drawing you in with its own particular fascinations, including a probing look at the scope of the Black Death, a realistic examination of the legends of both King Arthur and Robin Hood, a riveting description of the Battle of Bosworth Field, and a discussion of the surprisingly nuanced penalties of the early Germanic law codes.These lectures consistently deliver a fresh level of understanding about medieval England, its rulers and subjects, and their significance for the world we live in today. The chain of theme and event that links our world to theirs will never be clearer, rewarding every moment you spend with this series.

Far better histories of the British out there

She is possibly the most annoying person to listen to. Her constant mispronunciation (berg for borough got particularly annoying at one point) and her penchant for talking to you like you were 14 years old with learning problems definitely starts to grate after a while. I don't know whether she was asked to do this for an American audience, but she also loves going off on one in relation to what is best described as legends. King Arthur is not a historical figure, at best there is evidence of warlords in a period when there were probably a lot of warlords (what else was there to do in post roman times), yet he apparently warrants a lecture. She also gives a string of anecdotes, normally along the lines of 'so and so was said to have killed a dragon and then saw the virgin Mary', to which she will confidently proclaim that while that probably didn't happen (its important to say this) it tells us a lot about the personality of the person in question. Her treating of UK history is also fairly superficial nothing you wont have herd in the past if you have any interest in this area. Please don't waste your time with this, while Sharma may be a little bit up himself, his history of the same period was significantly better in a 'popular history' type format, same goes for Starkey. I would seriously avoid this rambling rubbish. To summarise I don't think this was for me.

This is the third of these courses I have listened to in a row, and I have loved the other two (one on language by and one on ancient civilisations). I guess they cant all be great.

Would you be willing to try another one of Professor Jennifer Paxton’s performances?

Only under pain of death

not really relevant, but if it had Samuel Jackson playing Alfred the Great I would consider it