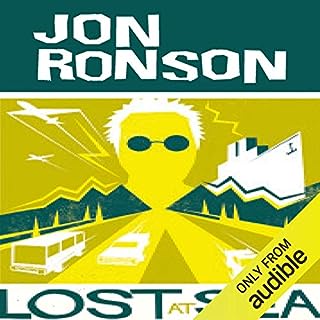 Jon Ronson is fascinated by madness, extraordinary behaviour and the human mind. He has spent his life investigating crazy events, following fascinating people and unearthing unusual stories. Collected here from various sources (including The Guardian and GQ America) are the best of his adventures.

Where does Lost at Sea: The Jon Ronson Mysteries rank among all the audiobooks you’ve listened to so far?

This is the funniest audiobook I've listened to yet, and when it isn't amusing its baffling, shocking or touching. The situations Jon finds himself in are too hilarious to not be true, such as

What was one of the most memorable moments of Lost at Sea: The Jon Ronson Mysteries?

Who would have thought Stanley Kubrick is the reason why we have post it notes in every pop of colour?
Who knew that Robbie Williams believes in UFOs and aligned being abducted by aliens as much like being in Take That as a teenager?
What happens when someone goes missing on cruise ships?
Jon Ronson's life must be a chain of very stressful or very ridiculous encounters, I would love to delve into his diary and just see what a week looks like. If you've never read his articles before, listening to this book is a great introduction. I'll keep going back to this more than I will a novel just to bask in the bizarreness and check that I heard exactly what he said right - that there are children in Christmas Town who answer letters to Santa as part of their school curriculum?!

Which character – as performed by Jon Ronson – was your favourite?

Jon Ronson's voice is homely to me - my family are Welsh and his accent warms me. I couldn't imagine anyone else reciting his stories, his delivery is the funniest part.

I giggled on my dry morning commute and will be forever bringing up anecdotes from this book (alongside other Jon Ronson collections - the Psychopath test and Them are others which I would strongly recommend. I spend my spare moments narrowing my eyes at colleagues and weighing up their points on the Psycopath test at least once a week, and you should too, it's a brilliant past time).

Jon is working on a film I believe is called Frank at the moment which I can't wait to hear more about if it delivers more of the same humour as this.