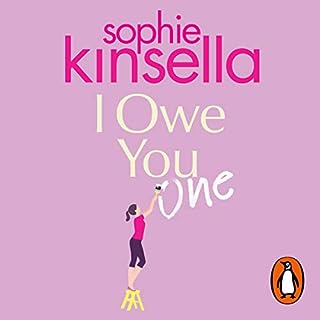 Fixie Farr can’t help herself. Straightening a crooked object, removing a barely there stain, helping out a friend...she just has to put things right. It’s how she got her nickname, after all. So when a handsome stranger in a coffee shop asks her to watch his laptop for a moment, Fixie not only agrees, she ends up saving it from certain disaster. To thank her, the computer’s owner, Sebastian, scribbles her an IOU - but of course Fixie never intends to call in the favour.

Fixie Farr is the main character of this book by Sophie Kinsella. I have always been a fan of Sophie and was looking forward to this new book when I saw she was bringing out a new title. This was the first book I had listened to on Audible. I had just signed up to Audible and thought it would be a great idea to listen to a book as I was moving around the house and getting on with everything, which I found out I can listen to through Alexa. The book was definitely an easy read, however, it was by no means one of my favourite Sophie Kinsella books. It is still nowhere near as good as things such as Twenties Girl.

Fixie is the daughter of the late owner of a convenience store, think Boyes meets B&M meets Arkwright's. They sell everything but following her dad's death, it has almost fallen into her hands to make sure the shop stays successful. Her mum is trying her best to keep the shop going and she thinks she is doing a good job at it, however, as the name states, Fixie has to be involved and make sure she is fixing everything. She can't leave things alone and if something is not working for her she has to "help" usually ending up with disastrous consequences. She means well but this is not always the case.

Even though Fixie is trying to keep everyone in order in the shop she has to try and keep her brother, Jake and her sister Nicole in check. Jake wants to take over the shop and revamp it to become the newest up and coming place in London, whilst Nicole has recently got married and with her husband working abroad she wants to turn the shop into a yoga retreat. A hippies dream basically. Fixie just wants to keep the family together and live by her motto, "Family first". It just seems her family are not living by their own motto and seem to have forgotten their loyalties since their dad passed. Especially when her mum decides to just up and leave and go and live with her sister, Fixie's Aunt, in another country and not tell anyone when she is coming back.

Throughout all of this Fixie has met a mysterious man who she does a favour for looking after his laptop whilst he steps out to take a phone call. Thereby creating the following game of "I owe you one" between Fixie and Sebastian. This game continues a number of times until Fixie realises she has a slight crush on Seb but his overbearing girlfriend would not approve of such a thing. That is also until Ryan turns up, Jake's friend from school who Fixie has loved since she was a teenager. She has always thought that the most perfect person for her was Ryan, so when he returns to their town she does everything she can to stay in his company and even convinces herself that the lazy, boring, scruffy Ryan is still the man of her dreams. That he is gorgeous, amazing, funny and considerate. Not the inconsiderate, self-centred person he has become who wants to use Fixie and her new connection with investment manager Seb.

This book is definitely an easy read and it was definitely what I needed whilst pottering around the house and using it to pass time and keep myself entertained. I was not engrossed but I was curious as to what would happen to the characters next and how Fixie would get herself out of the trouble she was ending up in. This is very much a Sophie Kinsella technique to keep the main character getting into trouble when you only want the best for her.

I would recommend this book to others but I would not say it would change your world. There are definitely other Sophie Kinsella books which are better and more interesting to read.