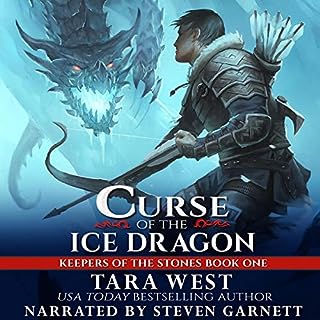 Born with mark of the Mighty Hunter, Markus brings his village back from the brink of starvation; for whenever he releases an arrow, his aim always strikes true. After a fateful hunting trip, he is forced to flee the vengeful sky goddess' ice dragon. When he falls into the land of the mysterious Ice People, he has to confront his father's abusive past before he faces his future. Then he must decide to flee the ice dragon or else battle the goddess, a choice that could end the life of his beloved brother or doom the girl he loves.

Give this compelling story a listen, you won't be disappointed!

Not only is it an exciting tale of a fantastical and imaginative world with some very convincing characters brought vividly to life by Steven Garnett's superb narration, but it also holds many messages for our own world today.

I have been totally absorbed and am thrilled that this is only the first book of a trilogy. Can't wait for the audiobook of Spirit of the Spirit Witch!