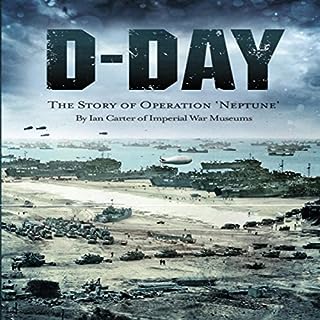 On June 6, 1944, the Allies carried out the largest amphibious assault in history. Five divisions of British, American, and Canadian troops were landed along a 50-mile stretch of the coast of Normandy in northern France; their mission to gain a foothold ashore and begin the liberation of north-west Europe. The flanks of the invasion force were secured by a major parachute and glider drop of three airborne divisions. By the end of that eventful day, Hitler's "Atlantic Wall" had been breached and 156,000 Allied soldiers were firmly established on French soil.

This Audiobook should be titled a beginners guide to the basics of D Day.

The narration is as dull as can be.

The content has nothing to do with Operation Neptune.

What a waste of a credit.