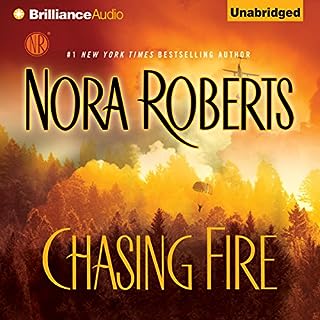 Little else in life is as dangerous as fire jumping. Flying past towering pillars of smoke, parachuting down to the edge of an all-consuming blaze, shoveling and sawing for hours upon hours, days at a time, all to hold the line and push back against the raw power of Mother Nature. But there’s also little else as thrilling - at least to Rowan Tripp. The Missoula smoke jumpers are one of the most exclusive firefighting squads in the nation, and the job is in Rowan’s blood: her father is a legend in the field. She’s been fighting fires since her eighteenth birthday.

I've long been a fan of Nora Roberts and have recently started listening to her audio books - Chasing Fire has to be one of my favourites. It's a gripping, action packed story, based around the Missoula smoke jumpers, that hooked me in from the start and I loved it. It had everything I enjoy in a story - drama, intrigue/suspense, action, steamy romance and laughter.
Smoke jumper Rowan is a fabulous character, strong both mentally and physically, determined (stubborn), feisty, quick tempered, loyal and damaged by her past. She is infinitely likeable and loveable despite or maybe because of her (many) flaws and rookie smoker jumper Gul thinks so too. I adored Gull, he's quirky, wise and gorgeous, secure and confident enough not to ever feel threatened by Rowan's strength of character, experience and abilities. Their evolving relationship is set against the backdrop of suspicious accidents, murder and deadly forest fires. Gull knows exactly what he wants, Rowan just needs to work it out as well.
The wonderfully descriptive story gives a good insight in to the work of the forest fire fighting service, perhaps occasionally somewhat forgotten first responders, and how the smokejumpers put their lives on the line time and time again.
I found the secondary characters in the story a big plus, they are all 'characters' probably because of the job they do, they all had their own traits and backstories to add to the mix. The growing relationship between Lucas and Ella is particularly sweet.
The suspense keeps going until the end, there are clues along the way, as well as red herrings but while I narrowed the list of suspects down I was never completely sure until the murderer was actually revealed.
A truly, great story beautifully narrated by Rebecca Lowman, that I would highly recommend! 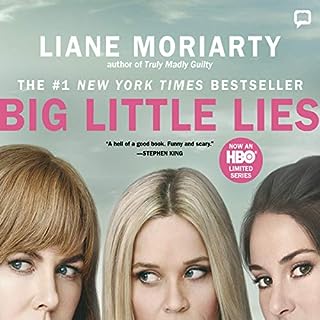 Pirriwee Public is a beautiful little beachside primary school where children are taught that ‘sharing is caring.’ So how has the annual School Trivia Night ended in full-blown riot? Sirens are wailing. People are screaming. The principal is mortified. And one parent is dead. Was it a murder, a tragic accident or just good parents gone bad? As the parents at Pirriwee Public are about to discover, sometimes it’s the little lies that turn out to be the most lethal.

A superbly written story that I enjoyed from start to finish. I choose to listen to the audible version which was wonderfully narrated by Caroline Lee. I came to this without having seen the TV series and am so glad I did. Completely hooked from the beginning this made my commute the highlight of my day. Liane Moriarty’s characters are quirky and complex but also completely believable and relatable.
You know the outcome from the start, someone from Pirriwee Public is left dead after the School Trivia night but the who, why and how remain an unresolved mystery until the end.
The story revolves around the lives of Madeline, Celeste and Jane and the school community of Pirriwee Public. Life is rarely as perfect as it seems, scratch the surface and you find the unravelling web of little lies trying to hold everything together.
The character interactions are excellent and the dialogues between characters are completely nailed. I love the ongoing commentary from the supporting cast that fills gaps, tantalises and amuses. I am certain I would have loved the book had I read it myself but the narration added an extra dimension allowing my imagination to take flight and fully immerse me in the story.
There are some dark themes explored in this story, domestic violence, sexual abuse and bullying carefully interwoven and dealt with a deft hand. The almost comedy and laughter in no way diminish the darkness but they don’t let it overwhelm either and underlying it all is a true sympathy for all the characters.
Cleverly written, completely enjoyable, and thoroughly recommended! 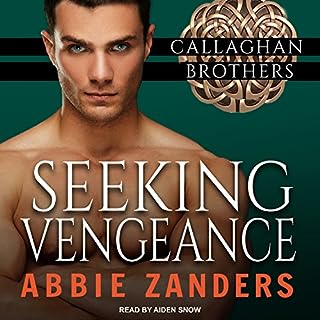 Ex-SEAL Sean Callaghan always knew that no ordinary woman would do it for him. When he encounters Nicki Milligan in his garage, it is lust at first sight. She is his every dark fantasy wrapped up in one sexy package. It doesn't take him long to figure out that she's so much more than that. Or that there's a lot more to Nicki than meets the eye. Sean knows he's tough, but Nicki might just be tougher. Now he just has to convince her that they were made for each other.

Another fabulous Callaghan Brothers story , beautifully narrated by Aiden Snow as usual. Sean & Nicki are made for each other, Sean of course knows this straight away being a Callaghan, Nicki takes longer to realise. Nicki has become my favourite Callaghan Croie probably because she is a kickass survivor, she and her twin brother Nick suffered a horrific childhood, well done Abbie Zanders for sensitively handling a topic I’m sure many would prefer not to think about as existing in our society, although she only probably touches the surface it is a good reminder that evil does exist in our world often closer than we think!
It’s hard to pick favourites with the Callaghan brothers but Sean is a force of nature and with his brothers’ help nothing will stop him finding and claiming Nicki as his even when she is resigned to her fate!
Great story, wonderful characters, plenty of action & a HEA that was so well deserved. 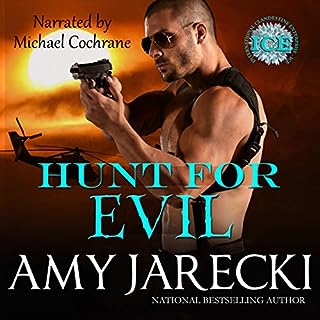 When Navy SEAL Commander Logan Rodgers winds up on a botched mission in the Gulf of Oman, his quick action in saving MI6 asset, Olivia Hamilton, brings him to the attention of the international espionage arena. Recruited by the mysterious and elite International Clandestine Enterprise (ICE), Logan faces Olivia again, but this time they're on the same team. Sparks fly as the two compete in a clash between skill and keen intellect, until a French girl is kidnapped by a suspected terrorist.

Liked the story hated the narration!

Logan Rodgers is a Navy Seal Commander, Olivia Hamilton is a MI6 spy, both have a single goal to Hunt for Evil. They meet when Logan saves Olivia’s life while destroying her two year mission to infiltrate a terrorist organisation. Both are at the top of their field but find themselves discharged from their jobs and recruited to work for the elite ICE organisation which officially doesn’t exist but has one goal to hunt for & destroy evil

As they train together so their attraction grows until eventually they give in to the sexual tension surrounding them. Olivia carries plenty of personal baggage and has made it her life work to hunt down the terrorist that blew up her parents. Logan has some of his own baggage but understands Olivia better than she thinks.

The story unfolds as they work together to discover why blonde teenagers are being kidnapped from Europe and where they are being held. Olivia goes deep undercover to find the location. This is where the story comes into its own with action, tension and danger as Olivia risks everything deep in Syria to help the kidnapped girls and Logan desperately works to save them all.

At the end of the mission Olivia’s demons come out in force, can she and Logan find a way for their relationship to survive?

It’s a great story and well written, I much preferred reading it to listening to the narration which quite simply grated and I wish I never bought the audible version. Michael F Cochrane’s version of Olivia’s English accent was just wrong & I spent more time cringing rather than enjoying the story. Mr Cochrane throws himself into every new accent with enthusiasm but ultimately for me it was annoying and distracting so I gave up on the audible version and finished the book the old fashioned way. 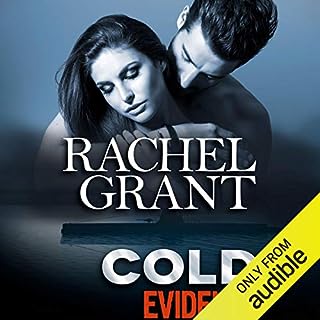 The only thing Navy underwater archaeologist Undine Gray fears more than facing former SEAL Luke Sevick is never scuba diving again. But when a dive on a Cold War-era US Navy submarine ends with an accidental explosion, she's terrified of going into the deep, forcing her to beg the most experienced diver she knows to take her back to the bottom of the cold Salish Sea. Luke wants nothing to do with the woman who destroyed his career a dozen years ago but finds it impossible to turn his back on her plea.

Wow! Who knew maritime archeology was so exciting & fraught with danger? I bought this when on offer having enjoyed other Rachel Grant books & decided to get the audible option so I could listen on my commute & while exercising - so glad I did. I loved the story & the characters, the authors research & detail is incredible. Luke & Undine have history, 12 years ago Undine betrayed Luke & changed the course of both of their lives. Brought back together by explosive circumstances Undine needs Luke & their chemistry is off the charts but can he ever forgive her or overcome the damage she did all those years ago? I loved both characters but Nicol Zanzarella’s narration brought them alive especially Luke. I lived the emotion, the laughter, the drama & the action.
The plot twists & turns alongside Luke & Undine’s relationship & is packed with action & suspense. Listening I became completely engrossed in the story & would highly recommend it to others. I wanted to find out the ending but also didn’t want the story & my time with Luke & Undine to finish. Needless to say I’ve now downloaded the first book in the series (audio version)for my next archeological adventure.