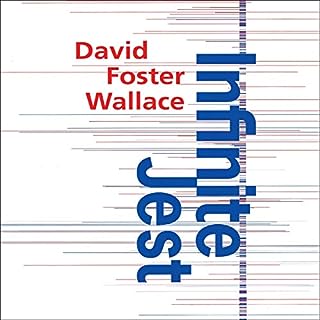 Somewhere in the not-so-distant future the residents of Ennet House, a Boston halfway house for recovering addicts, and students at the nearby Enfield Tennis Academy are ensnared in the search for the master copy of Infinite Jest, a movie said to be so dangerously entertaining its viewers become entranced and expire in a state of catatonic bliss....

I guess the main point of something like this is to help you decide Should I listen to this or not?

It is long - but then the reader is doing the work for you. And he does a superb job 95% of the time. His tone seems absolutely right generally and he dramatises brilliantly some passages which merit being dramatised.
I can’t say I like everything about Infinite Jest. Parts of it I would describe as mildly entertaining. Parts seem gratuitously disturbing. But it’s not for those parts I recommend you listen to it or read it. The most telling passages are truly bravura pieces of writing which I would be very sorry to have not encountered. Sometimes deeply moving, sometimes very funny, sometimes just spectacularly well observed. Writing of this quality is such a rarity we can’t afford to miss out on it. 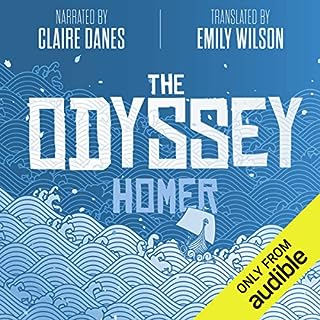 Acclaimed actress Claire Danes burnishes an epic story of heroes, gods, and monsters in a groundbreaking translation of The Odyssey, the first great adventure story in the Western literary tradition. When the wily warrior-king Odysseus sets off for home after the Trojan War, he doesn’t realize this simple undertaking will become a perilous journey of 10 years. Beset at every turn, he encounters obstacles, detours, and temptations—both supernatural and human—while his wife Penelope fends off would-be suitors desperate to take the throne.

Don’t think twice. Nothing else is like The Odyssey.

Having read the Richmond Lattimore translation a couple of times - first for study and years later for pure pleasure, I had hoped in vain for an audiobook of that. The Audible version of his Iliad translation is stunning to listen to.
So I was intrigued when this popped up as a suggestion and I read some reviews.
If you have not read The Odyssey already you should probably skip Emily Wilson’s introduction at first. But do come back to it when you can appreciate it - it considers the work from many angles but always in a relatable, engaging style and I agree with the reviewer who said the price is worth it for the introduction alone.
She aims for very plain language generally and for the most part it works very well. I love the fact that it is line for line. Her reluctance to reproduce the repetitive formulaic phrases such as ‘rosy fingered dawn’ etc is something she justifies in advance but I actually missed the charm of the repetitions and found her attempts at variation sometimes strained.
However, a great deal of power which can only originate in the narrative method of the original surges through her plain speaking unstoppably, wringing out almost every emotion imaginable before the shocking (to us) bloodbath of its climax.
Yes, there are some strange and alien ways of thinking in Homer’s world but far more striking and moving to me is how much we still share with the listeners of his time in our passions, fears, yearnings and consolations. And how much of the art of storytelling had already been mastered three thousand years ago. 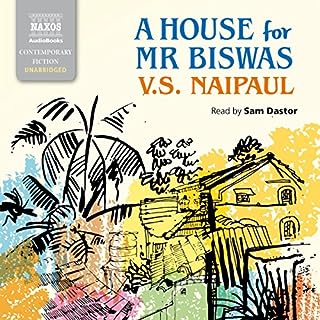 A House for Mr. Biswas, by Nobel and Booker Prize-winning author V. S. Naipaul, is a powerful novel about one man's struggle for identity and belonging. Born into poverty, then trapped in the shackles of charity and gratitude, Mr. Biswas longs for a house he can call his own. He loathes his wife and her wealthy family, upon whom he is dependent. Finding himself a mere accessory on their estate, his constant rebellion is motivated by the one thing that can symbolize his independence.

I saw another reviewer commenting to the effect that this is a tediously drawn out account of the minutiae of a life story of a nonentity in an obscure location.

I have to confess that there were times in the first third or so of the narrative when I considered not bothering - having begun with the assumption that there would be something more eventful or dramatic than there is.

However the characters and their exquisitely described surroundings gradually wormed their way into my consciousness to a point where I began to dread the approaching end of the story - as there would be no more of those so enjoyable sojourns in that time and place.

This review does not tell you much about what the book is about but others have done justice to that task. Here I am adding my tuppence worth simply to say I am so glad I stayed with it as it is richly rewarding and satisfying in the end. 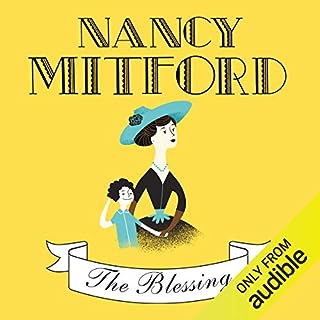 It isn’t just Nanny who finds it difficult in France when Grace and her young son Sigi are finally able to join her dashing aristocratic husband Charles-Edouard after the war. For Grace is out of her depth among the fashionably dressed and immaculately coiffured French women, and shocked by their relentless gossiping and bedhopping. When she discovers her husband’s tendency to lust after every pretty girl he sees, it looks like trouble. And things get even more complicated when little Sigi steps in.

Surprisingly daring in some ways, though confined to a privileged world. Great fun altogether.
Jenny Agutter’s English voices are great. The French ones need some tolerance (tante rhyming with ant, m’sewer, Gide with a hard G etc) but I was glad I stayed with it. 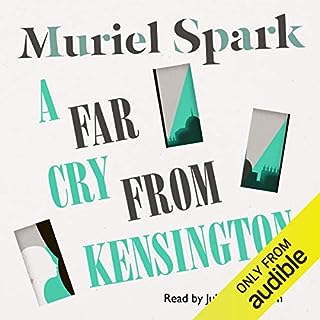 First published in 1988 and described by Ali Smith as 'one of Muriel Spark's most liberating, and meditative novels' - A Far Cry from Kensington shows Muriel Spark at the mature height of her powers.The narrator is one Mrs. Hawkins. She writes from Italy, a far cry from Kensington indeed, taking us back to her threadbare years in postwar London. As a young, rather fat war-widow she spent her days working for a crazy, almost bankrupt publisher; and her nights offering advice from her boarding-house in South Kensington.

What the hell just happened? - you may think at the end. It does not matter so much. The pleasure is mostly in Spark’s idiosyncratic narrative voice, full of surprising turns and dry observations with the occasional devastating image. 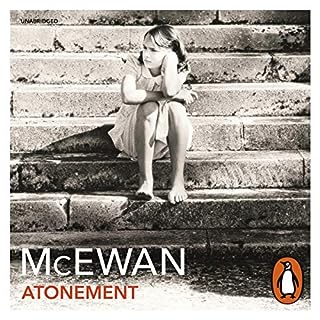 On the hottest day of the summer of 1934, thirteen-year-old Briony Tallis sees her sister Cecilia strip off her clothes and plunge into the fountain in the garden of their country house. Watching her is Robbie Turner, her childhood friend who, like Cecilia, has recently come down from Cambridge. By the end of that day, the lives of all three will have been changed for ever. Robbie and Cecilia will have crossed a boundary they had not even imagined at its start, and will have become victims of the younger girl's imagination.

Stuck it out to the end as I had gathered there were author tricks in store. Yes there are.

There are a few very good passages. The nurse in wartime London feels very vivid and genuine.

Mostly I felt McEwan trying hard but just lacking the spark of writing which really touches it illuminates. Occasionally excruciatingly precious, coy, contrived or smug.
I really can’t recommend this.
I found something similar ages ago reading Enduring Love in print - though that has one of the most stunning opening scenes ever, he just can’t seem to keep it up but boy will he try, try, try again. 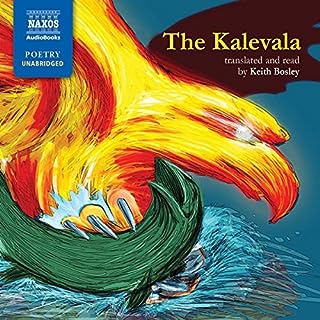 The Kalevala provides a compelling insight into the myths and folklore of Finland. Compiled by Elias Lönnrot in the 19th century, this impressive volume follows a tradition of oral storytelling that goes back some 2000 years, and it is often compared to such epic poems as Homer's Odyssey. However, The Kalevala has little in common with the culture of its Nordic neighbors: It is primarily poetic, it is mythical rather than historic, and its heroes solve their problems with magic more often than violence.

Only one third through but I'm in no doubt I'll want all 13 hours. It's like a drug.
I almost didn't click but curiosity made me listen to the sample and I was drawn in by the sound and the imagery straight away.
Nordic noir was never so harsh and lyrical.
What a delight to realise later that the reader Keith Bosley is also the translator! Amazing job.
I would tend to get bored by folk tales and myths if the text is plodding - it takes the driving energy of poetry like this to bring such material to life and that is here in abundance. 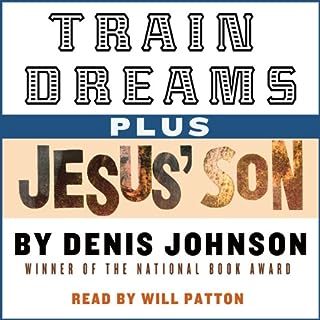 Here are two complete audiobooks by Denis Johnson, narrated by Will Patton. Listen to both Train Dreams and Jesus’ Son, as well as an excerpt from Denis Johnson’s National Book Award-winning Tree of Smoke.... In Train Dreams, Robert Grainer is a day laborer in the American West at the start of the 20th century—an ordinary man in extraordinary times. Buffeted by the loss of his family, Grainer struggles to make sense of this strange new world.

Other reviewers here have articulated the qualities of these two very different works. If you only like a 'proper story' you probably shouldn't bother.
The exquisite pleasures here have little to do with what happens and everything to do with originality of language, imagery and superb reading. 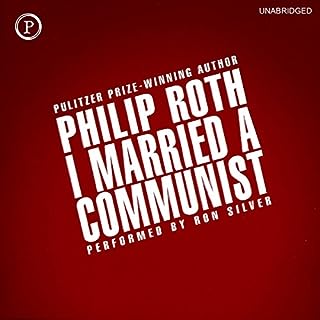 Iron Rinn, born Ira Ringold, is a Newark roughneck, a radio actor, an idealistic Communist, and an educated ditchdigger turned popular performer. A six-foot, six-inch Abe Lincoln lookalike, he emerges from serving in World War II passionately committed to making the world a better place and instead winds up blacklisted, unemployable, and ruined by a brutal personal secret from which he is perpetually in flight.

Roth read by Silver is stunning.

As a recent newcomer to Roth, I read The Plot Against America in paperback this summer and enjoyed it so then I tried American Pastoral read by Ron Silver on Audible. That was sensationally good so then I tried My Life As A Man but it was a different reader and a few chapters in I realised it was quite disappointing so I returned it and looked for another one read by Silver - which led me to this.
I've been enjoying a variety of good books for several years now on Audible and I always find that having the right reader is incredibly important. But in all my experience there has been nothing to compare with the marriage of Roth's prose with Silver's delivery. No doubt it is bound up in Roth's anecdotal monologue sort of method but if ever there were books which burst into flame when performed aloud they are these ones.
Silver's range of tone, pace and dynamics is virtuosic while expressing the deepest humanity. I wish everything of Roth's was available here read by Ron Silver. 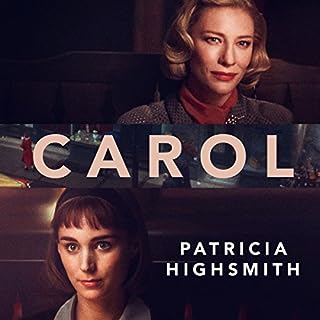 Therese is just an ordinary sales assistant working in a New York department store when an alluring woman in her 30s walks up to her counter. Standing there, Therese is wholly unprepared for the first shock of love. She is an awkward 19-year-old with a job she hates and a boyfriend she doesn't love; Carol is a sophisticated, bored suburban housewife in the throes of a divorce and a custody battle for her only daughter. As Therese becomes irresistibly drawn into Carol's world, she soon realises how much they both stand to lose....

Read my first Highsmith recently (The Talented Mr Ripley) and was knocked out by the qualities of her writing. Decided to try this one as something really different. Lots of good things here, besides being very brave in its day.