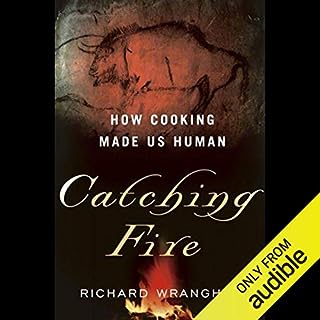 Ever since Darwin and The Descent of Man, the existence of humans has been attributed to our intelligence and adaptability. But in Catching Fire, renowned primatologist Richard Wrangham presents a startling alternative: our evolutionary success is the result of cooking. In a groundbreaking theory of our origins, Wrangham shows that the shift from raw to cooked foods was the key factor in human evolution. When our ancestors adapted to using fire, humanity began.

Prof. Richard Wrangham has written several brilliant books on comparative anthropology, and comparative psychology, but this has to be the best. Further, it is excellently read by Kevin Pariseau, which only enhances the arguments and the content. In the end I had to buy the book as well, to refocus on elements of it for my teaching, but that is not to decry the audio book. An excellent antidote to the sad dismissal of cooking as a domestic task in 1970's feminism, and a part explanation for the fascination with competitive cooking on TV - highly recommend. 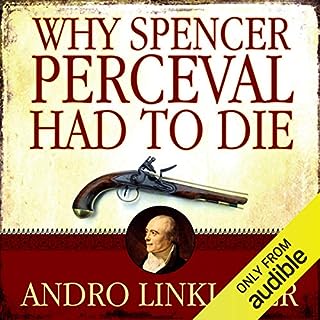 On the afternoon of May 11, 1812, Spencer Perceval, the all-powerful prime minister of Great Britain, was fatally shot at short range in the lobby of Parliament by John Bellingham, a Liverpool businessman. Perceval polarized public opinion: Revered by some and hated by others for his fight against the lucrative slave trade, he domineeringly kept Britain at war against Napoléon and was driving her into war with the United States despite the huge economic drain of each, raising taxes to new heights to finance his decisions.

This book is of importance to our understanding of the modern world, and sets the early 19th Century in the context of the birth of both a developing Europe, and the new United States of America. Since we only had the one Prime Minister assassinated, it is perhaps interesting that he is so seldom mentioned. I was drawn to this book by the chapter on John Bellingham, in Kelly Grovier's The Gaol, and cannot say that I am disappointed. Stephen Rashbrook reads very effectively and engagingly, and the mystery of how Bellingham, penniless by the end of February 1812, had the cash to pay for lodgings, good clothing, and the weapon he used to shoot Spencer Perceval, well told. Perhaps the real takeaway message of this book is the is the force of Anglican Evangelicalism, and the meaning of Providence in 1812, and how followers of this branch of Christianity tried to comprehend the loss of a Prime Minister they valued highly. 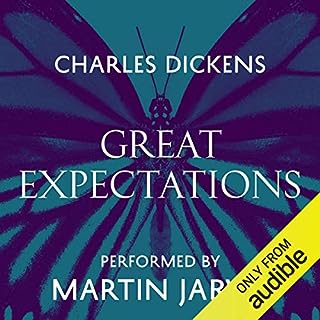 Pip is an orphan, brought up in a village on the Essex marshes by his disagreeable sister and her husband Joe Gargery, the kind-hearted village blacksmith. Life is harsh and Pip has few prospects until he receives from an anonymous benefactor the chance of escaping the forge for a more promising life in London. But his expectations are fraught with difficulties as he is haunted by figures from his past such as the escaped convict Magwitch, the eccentric Miss Havisham, and her proud, beautiful ward, Estella.

Affective Reading of a Dickens Classic

Martin Jarvis clearly influenced the characterisation of the Xmas 2011 BBC dramatisation of this book; he remains one of our best voice actors, and this recording is no exception. An in-depth feeling for the text is evident throughout, and we get to feel the true nature of Pip, his faults and his maturation, across the novel. I highly recommend this version. 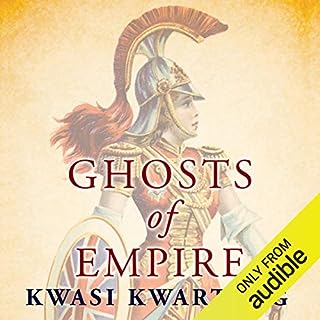 The British Empire was the creation of a tremendous outpouring of energy and opportunism, when the British were at their most self-confident, and the wealth they gathered was prodigious. At its heart lay a sense of the rectitude of the British way of life, meted out to vast swathes of the rest of the world without let or hindrance. Yet, as this book explains, the empire was not formed by coherent policy, and its decline reflected this.

Elliot Levey reads this important book with style and flair, with the preface feeling delivered by Kwasi Kwarteng himself, adding that special feel of the author's intent. Listening to history allows reflection of a kind not so easy when reading, and this book is of great importance: if you have a wish to understand many of the problems of political management in the old Empire, then this is the book for you. Well thought of by historians, this is a very accessible text. 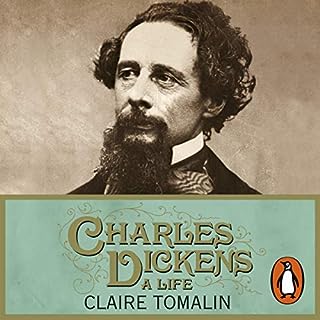 The unabridged, downloadable audiobook edition of Charles Dickens: A Life, the major new biography from the highly acclaimed Claire Tomalin, published for the 200th anniversary of his birth. Read by the actor Alex Jennings.

I have the The Complete Barchester Chronicles, and so was delighted at the choice of Alex Jennings as the reader for Claire Tomalin's remarkable biography of Dickens. She gives a clear account of his life, in all its complexities, and Victorian background, and adds an excellent reflection of the much later evidence of behaviours his daughter and sister-in-law would have preferred to remain hidden. At last I realised why Dickens' women are generally so two-dimentional. Both scholarly and a brilliant listen. 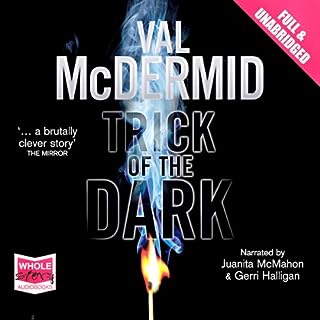 The brand new thriller from the award-winning crimewriter. 'Death is a hollow drum whose beat has measured out my adult life.' So writes Jay Macallan Stewart in her latest volume of memoirs. But nobody has ever asked whether that has been by accident or design. Nobody, that is, until Jay turns her sights on newly-wed and freshly-widowed Magda Newsam. For Magda's mother Corinna is an Oxford don who knows enough of Jay's history to be very afraid indeed...For Adults Only: Explicit language.

Well read, and presented, what made this audio crime novel interesting to me was the first consistent use of the 'Ethic of Care' which arose in Moral Philosophy research in the 1980s, in response to the idea of "Ethic of Justice' being the moral framework for the whole of humanity. Since the 'Ethic of Care' was taken as being the main female way of reasoning about the moral, or ethical, quality of behaviour this becomes a very interesting account indeed. I am not sure whether I would have realised this if I had read the book, rather than listening to it, whilst doing other things. Pacing is patchy, the story in the round, very interesting (and yes, you MUST be a medic to be a psychiatrist; very few people can start a medical degree with a Psychology degree, even a first from Oxford; although you might do psychology for your final, pre-clincal year, as medics did at UCL in the 80s when I were a lass) and there are forensic psychiatrists. Recommend 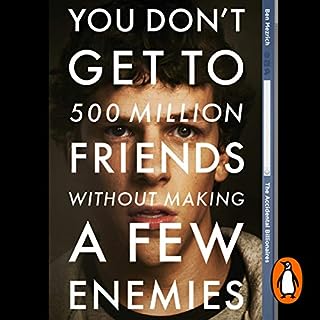 The Accidental Billionaires is the inspiration behind the Oscar winning film, The Social Network, dramatising Zuckerberg’s success and proving you don’t get to 500 million friends without making a few enemies… Eduardo Saverin and Mark Zuckerberg – an awkward maths prodigy and a painfully shy computer genius – were never going to fit in at elite, polished Harvard. Yet that all changed when master-hacker Mark crashed the university’s entire computer system by creating a rateable database of female students.

Ben Mezrich has drawn together interesting material to produce this account. I knew that Facebook had begun its life as a device for male students to rate female students at Harvard, but not its really 'on the legal edge' origins. Mezrich allows us to reflect on the people and the purposes behind the product, and its influences way, way, beyond the origins, and the costs of 'free to use' services (well, who does fund the servers?). This book is excellently read by Mike Chamberlain, who manages to keep a fresh and interested tone throughout. This is a very good listen. 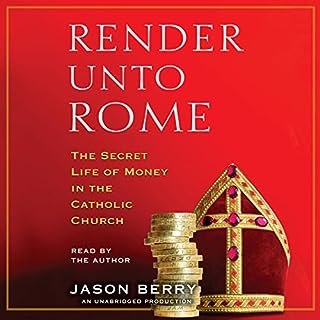 The Sunday collection in every Catholic church throughout the world is as familiar a part of the Mass as the homily and even Communion. There is no doubt that historically the Catholic Church has been one of the great engines of charity in history. But once a dollar is dropped in that basket, where does it go? How are weekly cash contributions that can amount to tens of thousands of dollars accounted for? Where does the money go when a diocese sells a church property for tens of millions of dollars?

This book is a crucial contribution to the current debate on the ethical soundness of the institution of the Vatican, its eloquence aided by the presentation: the author reads it. Jason Berry takes us through the complexities of the finance of the Roman Catholic Church in the USA, in particular, but his investigations have spread more widely, and his reasoning is always carefully made. Yes, this does sound like a thriller, but it cannot cause anything but sorrow to the devout, whom truly deserve better. A brilliant piece of investigative work, made absorbing by a careful and fluent reader: highly recommend. 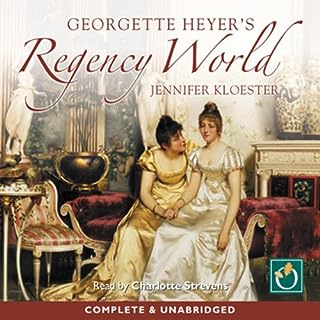 A best-selling novelist since 1921, Georgette Heyer is known across the world for her historical romances set in Regency England. This is the ultimate, definitive guide to Georgette Heyer's novels, her heroines, her villains and dashing heroes, the shops, clubs and towns they frequented, the parties and seasons they celebrated, how they ate, drank and dressed, socialised, shopped and drove. An utterly delightful and fun read, compelling in its historical detail, this is a must-hear for any Georgette Heyer fan.

I was a snob about romantic fiction until I started background research on its history for an academic paper; this book was part of my discovery about the care that Heyer took with her beautifully written literature. Kloester has produced a witty and helpful guide (the fabrics, the alcohol, and something of the political time) aiding the understanding, and entertainment value of the books. Charlotte Strevens has exactly the right register and humour in her performance to make this book live, Highly recommend. 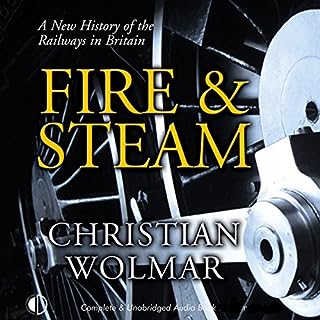 The opening of the pioneering Liverpool & Manchester Railway in 1830 marked the beginning of the railway network's vital role in changing the face of Britain. Fire & Steam celebrates the vision of the ambitious Victorian pioneers who developed this revolutionary transport system and the navvies who cut through the land to enable a country-wide railway to emerge.

The Magic of the Railway

As the granddaughter of a signalman this book has a special magic for me, placing the railway at the focus of Britain from its origins to the present day. The remarkable place of trains in the lives of the working population of Britain, from commuting, to fresh food transport, to the beginning of the holiday leisure industry, and the fellowship of trade associations and trades unions, is really brought to life (including the sexism of the industry). 'Narrated by the author' really adds to this experience, as Christian Wolmar is clearly fired by the subjects he has written about. A really good buy.