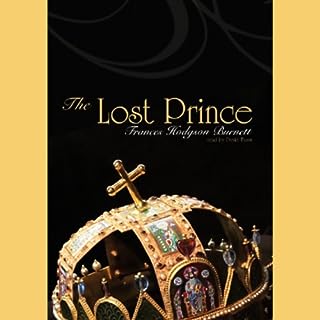 The Lost Prince is the enchanting story of a young boy discovering his true destiny. Twelve-year-old Marco knows he is being trained for something, but he isn't sure what. All his life he has traveled with his father in secrecy, learning many languages and the ways of a gentleman, but forbidden to speak about their country of origin, Samavia. Samavia has been fraught with war for the last 500 years, ever since the prince mysteriously disappeared.

Dated, but still an enjoyable adventure

It's not one of Frances Hodgson Burnett's well known stories, but I've always enjoyed this adventure. Yes it's dated, and somewhat heavy on Victorian spiritualism, but if you can look past those moments it's an enjoyable story, with real moments of danger and a satisfying ending.

The narration was good, although I did notice one line which the narrator read in the wrong character's voice. Overall though, he uses a good range of voices for the different characters, and his accents are good.

The most annoying thing about this audiobook, and it's totally unnecessary, is that it has been copied over from a CD at some point, but instead of editing out the CD breaks they have left them in, so every hour or so the narration is interrupted by an American Woman telling you 'this story is continued on disk X'. She also introduces each chapter, which seems odd. It more than a little ruins the mood, which is a pity, as overall I was very happy with this purchase.