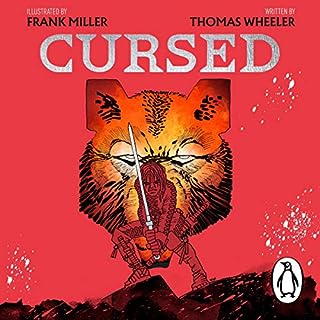 Nimue grew up an outcast. Her connection to dark magic made her something to be feared in her Druid village, and that made her desperate to leave...That is, until her entire village is slaughtered by Red Paladins, and Nimue's fate is forever altered.

Be prepared to meet a Warrior Queen!

Whoever wields the sword of power shall be the one true Queen.’

Based on the Arthurian legend, written by Thomas Wheeler and illustrated by Frank Miller. This book is a must-buy for fantasy fiction lovers!

I listened to the Audiobook (narrated by Katherine Langford), but I also purchased the hardback. (It was well worth it for the awesome illustrations).

Primarily, ‘Cursed’ is aimed at young adults. However, as an adult, I loved this book and I think it’s highly suitable for anyone teenager and above. (It can be quite violently graphic in places).

Nimue (our lead heroine) is an outcast to her people, until the day the red paladins slaughter Nimue’s entire village. As her mother’s last dying wish, Nimue is entrusted to deliver the Sword of Power to Merlin the Magician.

As I listened to Katherine Langford’s wonderful narration (and I must say, I was very impressed!) it was easy to imagine ‘Cursed’ as a tv series. And awesomely, Netflix are working on a tv adaptation right now! Wheeler writes with pace - something I particularly enjoy. Each chapter has a scene (or several!) which plays out just like a scene you would expect to see in a movie or tv series. Supporting this further, we are introduced to an entire cast of vivid characters, again, it’s easy to imagine them all in a tv series.

When I think of King Arthur and Excalibur, I always think of a sword embedded in a stone, with only the ‘true King’ strong enough to free the sword and wield it. In ‘Cursed’, the true strength to wield the sword takes on a new, interesting form. And freshly, perhaps a ‘King’ isn’t strong enough to control the dark, violent power of the sword? But perhaps a Queen is?

I didn’t want ‘Cursed’ to ever end. Especially with the way it ended. (I won’t give anything away, but the last few chapters will leave you yearning for the tv series, or a sequel...Mr Wheeler??)

All in all, I loved ‘Cursed’. And if you’re a fan of King Arthur, or fantasy, or strong female heroines, then this book is just for you!