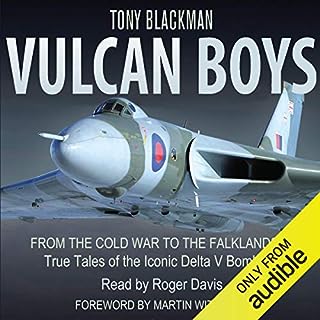 The Vulcan, the second of the three V bombers built to guard the UK during the Cold War, has become an aviation icon like the Spitfire, its delta shape instantly recognizable, as is the howling noise it makes when the engines are opened for takeoff. Vulcan Boys is the first Vulcan book recounted completely firsthand by the operators themselves.

How do you know there is a pilot in the room?

Because the pilot will work it into conversation as many times as possible before he leaves.

If you are interested in stories where the aircraft was used then try another book.
This unfortunately is a marvellous collection of anecdotes of self importance. It is written in a very formal manner with alot of recounting of names of who was in charge at this date and how very fortunate one was when they got to fly with a senior officer.
Not alot of substance to the story at all. There were only a handful of interesting story line that took my fancy. There were a few blatant lies written as anecdotal fact.
Overall I was very disappointed that the interviews were solely focused on the pilots with no side stories from ground crew or civilians or journalists or anybody else that could add flesh to the bare bones in this book.
This is my second Tony Blackman book, the other being Nimrod rise and fall. which was quite dry but interesting. This one however was an exercise in determination. 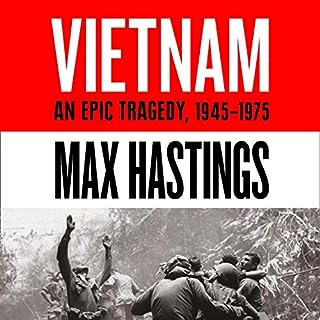 Vietnam became the Western world’s most divisive modern conflict, precipitating a battlefield humiliation for France in 1954, then a vastly greater one for the United States in 1975. Max Hastings has spent the past three years interviewing scores of participants on both sides, as well as researching a multitude of American and Vietnamese documents and memoirs, to create an epic narrative of an epic struggle. He portrays the set pieces of Dienbienphu, the Tet offensive, the air blitz of North Vietnam and less familiar battles such as the bloodbath at Daido.

One of the finest stories of the Vietnam tragedy. A very humanity based unbiased account.
As with all Max Hastings books I found this to be very well researched from all sides of the conflict. I especially loved the fact that it was not written as an American war. This account is Vietnams story from the origins of the troubled nation through colonialism, independence, division, allied involvement alongside the USA and finally the outcome right up to today.

On October 3, 1993, Task Force Ranger was dispatched to seize two high-profile lieutenants of a Somali warlord. Special Forces troops were transported by ground vehicles and helicopters, and the mission was meant to be over within the hour. They quickly found themselves under heavy fire, and two Black Hawk helicopters were shot down. With a hastily organized relief column many hours away, the American troops faced a desperate battle for survival.

The story re-tells the Black Hawk Down story. This is obviously done many years later and with more reference to source material than the Bowden book. This books blends analysis and story beautifully. Many references are made to interviews with personnel and mentions the bigger intelligence activities around the event.
Finally it talks about the big screen inaccuracies and myths.
My advice would be to read Black Hawk Down, watch the movie including the behind the scenes, watch the multiple documentaries, do a little bit of online browsing then read this book to round it all off nicely.
This books translates well to an audiobook however I recommend a little bit of research first including maps and a brief description of the key points of the day. 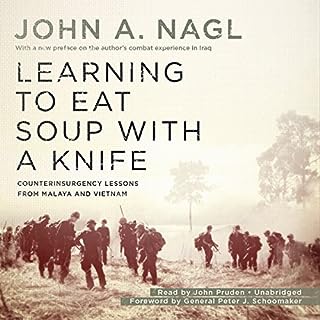 Invariably, armies are accused of preparing to fight the previous war. In Learning to Eat Soup with a Knife, Lieutenant Colonel John A. Nagl—a veteran of both Operation Desert Storm and the conflict in Iraq—considers the now crucial question of how armies adapt to changing circumstances during the course of conflicts for which they are initially unprepared.

Draws on many of the similar comparisons of the COIN of Malaya vs Vietnam but fails to highlight the massive differences such as physical geography the historical links of the parties involved in each conflict.
This is a prime example of displaying statistics that suit your end goal.

Overall the narrator was very clear and performed well. The story flowed well except for the statistics page where it would be better to physically see rather than to listen to them. 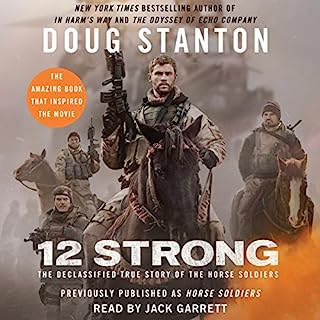 12 Strong is the dramatic account of a small band of Special Forces soldiers who secretly entered Afghanistan following 9/11 and rode to war on horses against the Taliban. Outnumbered 40 to one, they pursued the enemy army across the mountainous Afghanistan terrain and, after a series of intense battles, captured the city of Mazar-i-Sharif. The bone-weary American soldiers were welcomed as liberators as they rode into the city. Then the action took a wholly unexpected turn.

Overall a very good account of how special forces soldiers interact with local forces to achieve a goal. For those interested in the military diplomatic psychological of soldiering it is a good account of obviousness learned by American forces.

The overall story was interesting with Americans learning how small wars are fought without a large supply train. I found it very interesting that the book at times stressed the fact that the Afghans did a lot of the fighting rather than claiming all the valour for the US troops.
The narrator was good though the hoarse throatiness during stressful times in the story made my eyes roll.


In the end it draws a very good contrast to the beginning of the Afghanistan campaign as opposed to the Iraq campaign.

Overall worth a read or listen.

Developed specifically for the Vietnam War, Swift Boats were versatile craft "big enough to outrun anything they couldn't outfight" but too small to handle even a moderate ocean chop, too loud to sneak up on anyone, and too flimsy to withstand the mildest of rocket attacks. This made more difficult an already tough mission: navigating coastal waters for ships and sampans smuggling contraband to the Viet Cong, disrupting enemy supply lines on the rivers and canals of the Mekong Delta, and inserting SEALs behind enemy lines.

Very well researched with great personal stories from the point of view of each story teller.
Admittedly, in my minds eye I kept visualising PBR's in the stories rather than swifts.
I recommend having a quick research of swift boats and maps before listening just to help sent the scene.
Because it's an audio book it does lack the visual cues of the photos and maps/diagrams required for a story like this. However it was still outstanding.
At no point did I feel any gun ho moments which publishers like to force into some books.
This is pure reminiscences. Humorous, tragic, happiness, sadness, emotional numbness, excitement and boredom.
Truly a great testament to the men's memories. 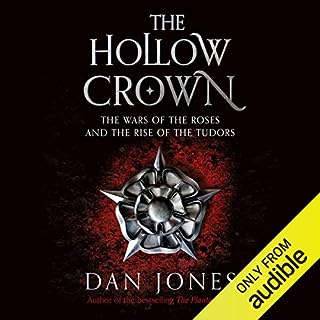 Some of the greatest heroes and villains in British history were thrown together in these turbulent times: Henry V, whose victory at Agincourt and prudent rule at home marked the high point of the medieval monarchy; Edward IV, who was handed his crown by the scheming soldier Warwick the Kingmaker, before their alliance collapsed into a fight to the death; and the last Plantagenet, Richard III, who stole the throne and murdered his own nephews, the Princes in the Tower.

insightful and a good listen.

enjoyed the book the narrative was very good and made it easy to listen to. 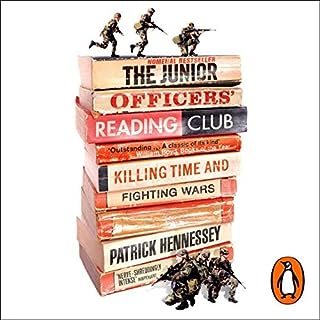 Patrick Hennessey is a graduate in his 20s. He reads Graham Greene, listens to early-90s house on his iPod and watches Vietnam movies. He has also, as an officer in the Grenadier Guards, fought in some of the most violent combat the British army has seen in a generation. This is the story of how a modern soldier is made, from the testosterone-heavy breeding ground of Sandhurst to the nightmare of Iraq and Afghanistan.

Military story cliché to the max ends with PTSD.

Performed by the author.
I had this book highly recommended to me but was sorely disappointed.

Cliché 1: Bitter at the Army and politics of the war.
Cliché 2: Educated priveleged boy seeks adventure to become a man.
Cliché 3: Loves his hard working boys.

The author received an education before enlisting had every opportunity to research the military before he joined. Yet he joins, we go through the story of his training and operations and roles to the point he quits the Army to the predictable end of a discussion of PTSD.

His use of prose and his explicit and elaborate descriptions of thoughts sights sounds and experiences are second to none. For that I applaud him.

However the story itself was just so predictable to anyone who has served in or even read a book about the military and warfare. I finished with the hope of the story somehow getting better with some interesting anecdotes but found it quite boring overall.
The authors performance at reading his own story was reminiscent of a petulant upper class teenager. 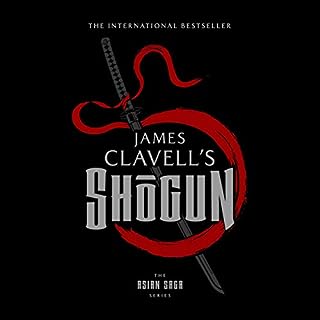 A bold English adventurer; an invincible Japanese warlord; a beautiful woman torn between two ways of life, two ways of love - all brought together in an extraordinary saga of a time and a place aflame with conflict, passion, ambition, lust, and the struggle for power.

pretty awful narrator.
could not get into the story much to my disappointment as it was so highly recommended. maybe suitable for an older generation of reader by the sounds of it 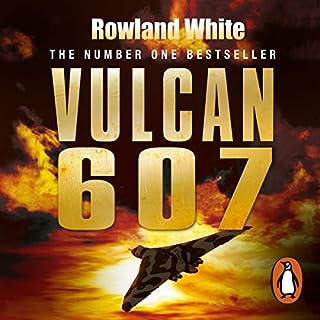 Random House presents the audiobook edition of Vulcan 607 by Rowland White, read by Roy McMillan. It was to be one of the most ambitious operations since 617 Squadron bounced their revolutionary bombs into the dams of the Ruhr Valley in 1943.... When Argentine forces invaded the Falklands in the early hours of 2 April 1982, Britain's military chiefs were faced with a real-life Mission Impossible.

Quite well performed by the Narrator.
The story was very well researched but somewhat lacking in something, couldn't put my finger on it though felt the actual climactic point passed quickly and without any real drama. Then it trailed off to talk about the Squadron history and the Vulcan force overall. Quite an unravelled finish I thought.