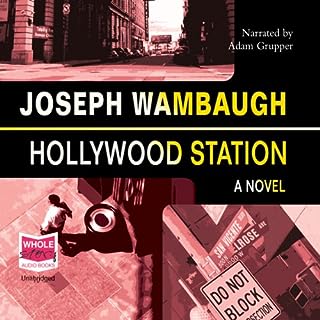 Outside Grauman's Chinese Theatre, Batman has assaulted Spider-Man. Marilyn Monroe reported the crime and three Elvises witnessed it. It's business as usual for the cops out of Hollywood Station. But while they deal with the costumed crack-heads, prostitutes, purse snatchers, and ordinary lunatics that haunt the boulevards, in the streets behind the lights and crowds, the real Los Angeles simmers, never far from boiling point.

Contrary to the slightly misleading publishers blurb, this is an ensemble story which only really focuses on one story towards the end of the book. A full and diverse range of police officers and citizens are given a thorough outing and each of them brings a unique joy. While there are undoubtedly moments of drama and pain, the emotive core of the book is comic; Wambaugh has a perceptive and critical eye for Americana and all that lies within in it, with the cultures of drugs, police, politics and of course hollywood sent up in a style that quite frequently made me laugh out loud.

It should also be noted this audiobook is a fantastic medium; this is one of the best narrations I've heard from Audible, and the chapters are at just the right length at around 40 minutes.

I can think of few people to whom this would not appeal; as highly recommended as anything else on this site. 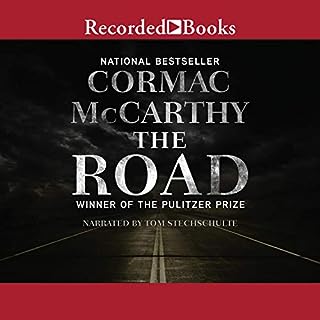 Winner of the Pulitzer Prize for Fiction, 2007.
America is a barren landscape of smoldering ashes, devoid of life except for those people still struggling to scratch out some type of existence. Amidst this destruction, a father and his young son walk, always toward the coast, but with no real understanding that circumstances will improve once they arrive. Still, they persevere, and their relationship comes to represent goodness in a world of utter devastation.

a chilling vision of the future

I suspect that a lot of people coming to The Road have, like myself, been introduced to McCarthy thanks to the recent film adaptation of No Country for Old Men, and so this is probably a good reference point.

No Country received near universal critical acclaim, but in my experience audience reaction was a little more mixed. Sure, plenty (including myself) agreed with the critics, but many seemed to think the desolate speech, settings, lack of truly cataclysmic events, and the closing dream sequence were entirely off-putting.

Well, all of the above factors are present in The Road, in a far greater density than in No Country. Our lead character is in a similar mould to Tommy Lee Jones with his slow, considered speech, there is the lack of a traditional climax, and the story starts with a dream sequence to rival that in No Country.

The story follows ?The Man? and ?The Boy? as they travel a road across the southern United States attempting to get to the coast following an unknown apocalyptic event. Needless to say, our travellers encounter both natural and human challenges in this desolate world and these are the main focus. It is worth noting here that, again like No Country, some of these encounters involve extreme violence and extremely distressing images; those of a nervous disposition should certainly beware.

From an Audible point of view, the book is of a manageable length and very well narrated. Despite this I do wonder if the inability to dwell on some of McCarthy?s topics means that something lost in the transition from page to wave; perhaps the forced pacing a narrator gives makes up for this, I don?t know. Finally, I always prefer chapters in audiobooks as they allow for a natural breaking point, and these are lacking here.

Overall, if you enjoyed No Country you will get something worthwhile from this and it is certainly worth your time. The opposite of course also applies, and at least for some, this is worth considering

a fascinating journey through science

Bryson delivers a truly mesmerising account of scientific exploration and the people behind it in this fantastic work. All of the areas one would expect are covered, with cosomology, astronomy, geography, geology, and biology all given comprehensive cover.

That Bryson is not a scientist undoubtedly helps him cover such a wide range. His tone is that of man on a voyage of discovery himself (as he surely was) and not as an academic in an ivory tower. This abstraction allows for touches of Bryson's humour to shine through when similar texts from within science would perhaps be a little dry.

Perhaps the most surprising aspect of 'A Short History' is the attention given to the human stories behind the great discoveries discussed; we are given insights into the minds of Darwin, Newton, Lyle and countless others that fascinate, inform, and leave you grasping for the nearest pen as you feel the need to track down that certain biography or key text. This move lightens the factual density nicely and allows us to see another aspect of science. This imposing, faceless entity that is 'Science' is not the clean, crisp discipline its practitioners would wish, but a place filled with all the deceit and vengeful intent of your average episode of Eastenders.

For my money, Bryson spends a little too long discussing the catastrophic (although this is probably reflected in science itself) without putting his facts it into context, and this is perhaps the books greatest flaw. Still, 'A Short History' is peerless and certainly warrants your attention. I would also implore you to listen to this unabridged version. While the abridged version is read by Bryson which is an appeal, the narrator here is fantastic and certainly does the book justice. The chapters last around 40 minutes meaning that while the sum total is large, each segment can be easily digested. If you do choose the unabridged version; you are in for a 20 hour treat that won't easily be forgotten.