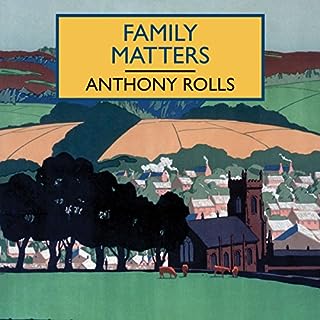 Robert Arthur Kewdingham is an eccentric failure of a man. In middle age he retreats into a private world, hunting for Roman artefacts and devoting himself to bizarre mystical beliefs. Robert's wife, Bertha, feels that there are few things more dreadful than a husband who will persist in making a fool of himself in public. Their marriage consists of horrible quarrels, futile arguments, incessant bickering. Scarcely any friends will visit the Kewdinghams in their peaceful hometown, Shufflecester.

Even allowing for an author's need to establish a scenario and characters, this dragged. After four hours I checked to confirm that I had indeed chosen something from 'crime and thrillers' (there having been neither crime nor thrills). 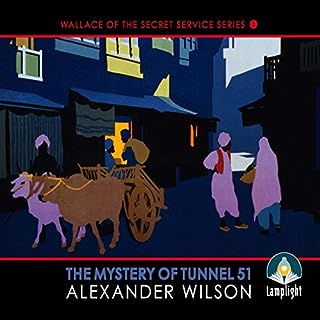 Chief of the Intelligence Department Sir Leonard Wallace - bearing always the hallmark of coolness and wit - is up to his earlobes in trouble. Summoned by the Viceroy of India, he makes a rapid flight to India to investigate the mysterious death of British officer Major Elliot and the theft of some very important dispatches.

I greatly enjoy detective yarns from the so-called Golden Age of crime writing, but this was decidedly bronze medal stuff. The premise was fine, and when the author was describing the Indian countryside (clearly taken from personal experience) that too also held up. However, the pace was even uneven and character stereotypes were embarrassing shallow. We had to suffer cringing natives, who often gave in after little more than a bluff or sharp stare from an pukka Englishman, plus a hero-worshipping No2, and then Wallace's batman, who came across like like Long John Silver's idiot brother. "Swab me decks!" has never been used so often and with so little justification. Even allowing for the fact that what is acceptable in conversation has changed in the last couple of generation, too much of the dialogue here was simply excruciating. I'd recommend fast-forwarding through any passage involving Wallace's family. I had had great hopes for the series, but no. It was awful. 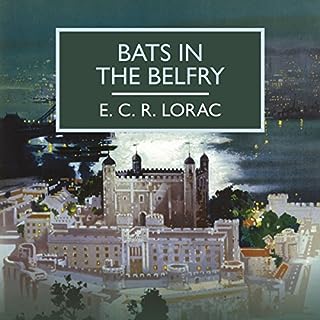 Bruce Attleton dazzled London’s literary scene with his first two novels, but his early promise did not bear fruit. His wife, Sybilla, is a glittering actress, unforgiving of Bruce’s failure, and the couple lead separate lives in their house at Regent’s Park. When Bruce is called away on a sudden trip to Paris, he vanishes completely until his suitcase and passport are found in a sinister artist’s studio, the Belfry, in a crumbling house in Notting Hill, and Inspector Macdonald must uncover Bruce’s secrets. This intricate mystery from a classic writer is set in a superbly evoked London of the 1930s.

If you like your murder mysteries in the Agatha Christie mould, then this is for you. No particular depth to the characters, who seem two-dimensional stereotypes, but there are enough twists to keep your attention. A few non-PC turns of phrase, but that was the style of the day. I thought I'd guessed the ending from quite a way back, but I was mistaken. So, well done E C R Lorac. 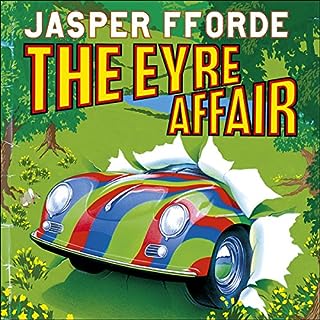 There is another 1985, somewhere in the could-have-been, where the Crimean war still rages, dodos are regenerated in home-cloning kits and everyone is deeply disappointed by the ending of 'Jane Eyre'. In this world there are no jet-liners or computers, but there are policemen who can travel across time, a Welsh republic, a great interest in all things literary - and a woman called Thursday Next. In this utterly original and wonderfully funny first novel, Fforde has created a fiesty, loveable heroine and a plot of such richness and ingenuity that it will take your breath away.

Sometimes you have to take a chance on a book. I remember doing this with this book in printed form years ago, and never regretted it. The audiobook is clearly and intelligently read and loses nothing in the 'translation'. I have no real interest in fantasy literature, but this book (and the whole series) stands apart. There is a wit and intelligence in the writing, which sets Mr Fforde apart from most other novellists. He has the ability to exploit and develop ideas without ever slipping into smug cliche or lazy plot devices. The Eyre Affair works as a stand-alone item, but it also the start of a series. Yes, take a chance... 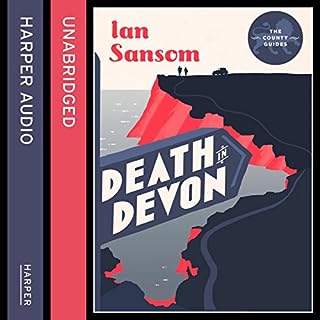 Cream teas! School dinners! Satanic surfers! Join our heroes as they follow up The Norfolk Mystery with a bad case of...Death in Devon. Swanton Morley, the People's Professor, sets off for Devon to continue his history of England, The County Guides. Morley's daughter, Miriam, and his assistant, Stephen Sefton, pack up the Lagonda for a trip to the English Riviera. Morley has been invited to give the Founder's Day speech at All Souls School in Rousdon.

More of the same, sadly

I tried the second volume in the hope that I might warm to the characters, but they proved to be even more irritating in volume 2. Excellent narration with clearly defined characters and accents, but Mike Grady is wasted on this pretentious material. It's the author showing off and then blaming it on the main character. Won't be buying any more in this series. 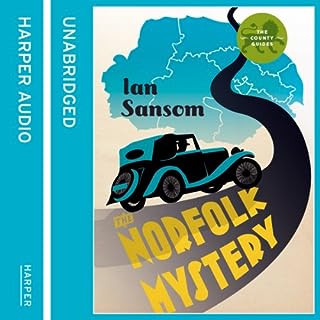 The first book in The County Guides to Murder Series. The County Guides to Murder are a series of detective novels set in 1930s England. The books are an odyssey through England and its history. In each county, the protagonists - Stephen Sefton, a veteran of the Spanish Civil War, and his employer, the People's Professor, Swanton Morley - solve a murder. The first book is set in Norfolk. The murder is in the vicarage. There are 39 books - and 39 murders - to follow.

An excellent audio-narration but the characters are so irritating. Yes, Morley is expected to get on our nerves, which might be a smart literary device, but gets very wearing. WIll try the second volume, but more in hope than expectation. Don't expect a standard whodunnit. 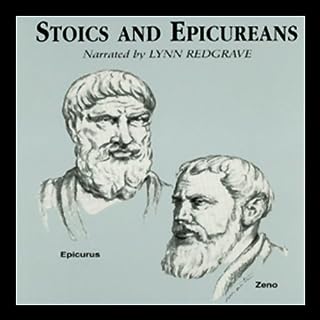 Stoics and Epicureans date from the Hellenistic period, but the debate between these two modes of thought continues today. For the Stoics, the goal of human life was to align one's nature with the rational order of all things by cultivating pure reason. Through the practice of dialectic, they aimed for ethical righteousness and self-control. In sad or turbulent times, stoical endurance has appealed to many people as a way of coping.

A range of intriguing ideas

I must admit that I bought this for the section on Epicurus, given that "pleasure", "leisure" and Epicurus appeared in an Open University module I had come across. In that respect, it fleshed out the OU material and demolished the slur about epicureanism. The audiobook is even-paced, occasionally interspersed with some awful accents from readers quoting from various international authors. It would have been better had Lynn Redgrave's calm voice narrated everything. All things considered, this is a book that can be listened to repeatedly and in small sections, if you wish to engage in the diverse ideas on offer. 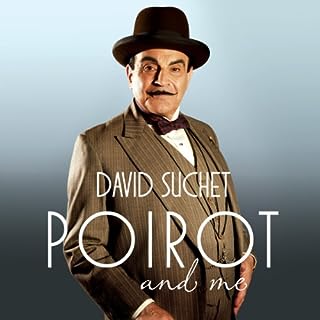 Actor David Suchet recalls his experience of playing Agatha Christie's world-famous detective, Hercule Poirot, for almost a quarter of a century. In the summer of 2013 David Suchet filmed his final scenes as Hercule Poirot. After 24 years in the role, he will have played the character in every story that Agatha Christie wrote about him (bar one, deemed unfilmable) and he will bid adieu to a role and a character that have changed his life.

The idea of an actor running through such a large body of work almost on an episode by episode basis is one that ought to dissuade all but the hardened devotee from doing more than just dipping into the work from time to time. However, there is something more here, and the varying viewpoints that Suchet adopts, plus the compelling biographical thread make this compulsive listening. I must admit that at the start bits of it seemed a little pretentious or 'luvvy', but by the end I was won over - not least by Suchet's sincerity and compassion. 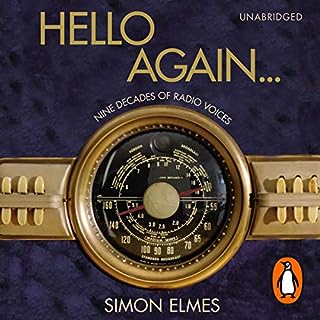 14 November, 2012 marks the 90th anniversary of the BBC's first-ever broadcast and the beginning of the British love affair with radio. This fascinating book takes as its starting point those early, tentative programmes broadcast from Marconi House on the Strand, and follows the story of those magical radio voices through the years of economic depression, war and austerity, to the swinging 60s and up to the digital era. Above all, it celebrates the great, the forgotten and the notorious voices of radio from the last nine decades, and the programmes they made famous.

This is a fascinating story, well told. Elmes has a light touch and an eye for well-chosen examples. The problem with this reading, however, is that it lacks the original recordings. Elmes is not a talented impersonator, so there is only so much that he can convey via a description of the vocal delivery and the way in which different lengths of pause are indicated by the number of dots left in the printed quote. Clearly, this is an audiobook, so it is constrained by being a vocal version of the book, but you will end up feeling that something is lacking and wondering how it might have been conveyed differently. 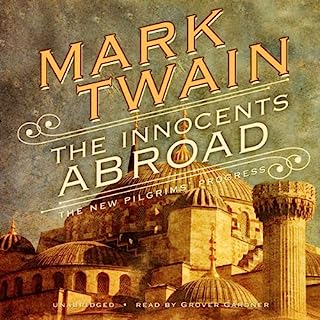 In June 1867, Mark Twain set out for Europe and the Holy Land on the paddle steamer Quaker City. His enduring, no-nonsense guide for the first-time traveler also served as an antidote to the insufferably romantic travel books of the period.

A fascinating survey of France, the Mediterranean and Asia Minor in the late 1860s. It's the little snap-shots that provide most pleasure. The pen-portraits of Napoleon III and Tsar Alexander II are worth setting again more standard historical summaries. There are, as might be expected, playful digs at aristocratic pretension and the dirt, laziness and corruption of many ordinary people, but Twain is similarly unforgiven about some of his own countrymen. The Crimean War is referred to on occasion, but it is interesting to note the lack of real reference to the more recent American Civil War in a work that relies on building parallels for readers back in the USA – readers who understood the copious Biblical and classical allusions more than their more counterparts.. There is throughout a balance between naive expectation and ultimate disappointment, which will speak to many a tourist who finds that guidebooks and popular imagery often distort a more prosaic reality. I personally preferred his subsequent "A Tramp Abroad" on Germany and Switzerland, though the range of discussion is broader here. The reading in this version is faultless.