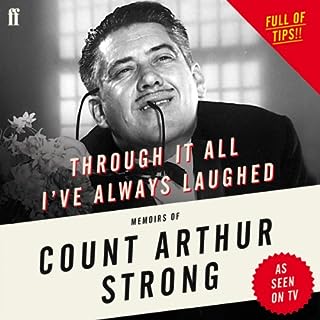 Count Arthur Strong reads the story of his extraordinary journey from his humble early years as the only son of a contortionist in wartime Doncaster to the dizzy heights and excesses of fame as one of the shining lights of popular entertainment. Count Arthur Strong is a show business legend, after-dinner speaker and a leading authority on Ancient Egypt, having been stationed there during his nation service. He has countless friends in the showbiz world.

Perfect for the Count's Fans.

If you like Count Arthur Strong's radio show then you will most likely enjoy this audiobook. Certainly not a book to read yourself as it is really a performance piece only deliverable by the Count himself. Probably not to everybody's taste but I enjoyed it. 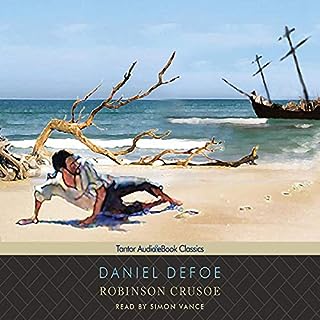 Widely regarded as the first English novel, Daniel Defoe's Robinson Crusoe is one of the most popular and influential adventure stories of all time. This classic tale of shipwreck and survival on an uninhabited island was an instant success when first published in 1719, and it has inspired countless imitations.

The beginning of Mark Twain

I understand that this is the father of the British novel. I am also lead to believe that "The Adventures of Huckleberry Finn" is the Father of the American novel.
Now that I have listened to both (Pat Frawley reading Twain which I listened to first) it all makes sense. No question that this is great and the adventures of Huckleberry Finn is brilliant but I do see the literary connection. 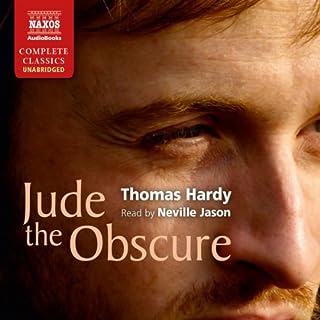 Sexually innocent Jude Fawley is trapped into marriage by seductive Arabella Donn, but their union is an unhappy one and Arabella leaves him. Jude's welcome freedom allows him to pursue his obsession with his pretty cousin Sue Bridehead, a brilliant, charismatic free-thinker who would be his ideal soul-mate if not for her aversion to physical love. When Jude and Sue decide to lead their lives outside marriage they bring down on themselves all the force of a repressive society.

A Pleasant Surprise for Me.

Would you listen to Jude the Obscure again? Why?

How well the author brought all the points he wanted to make about society and the modern and traditional thought of the time, through a combination of a good plot and crafted and sometimes incredibly explanatory dialog.
And it is a good story.

Which character – as performed by Neville Jason – was your favourite?

Richard Phillotson. Beautifully voiced. I liked this character. For much of the book Phillotson represents convention in progress. Unlike the main characters, when a difficult decision has to be made he does not prevaricate. He acts wisely. His decision is not based on tradition or on modern philosophies but on what he feels to be the human truth of the matter. The decision is greatly to his personal disadvantage but he accepts this because it was the right thing to do.

Yes. Reminded me of growing up. (up to a point. I still have all my kids)

I only tried this book by chance and I'm really glad I did. 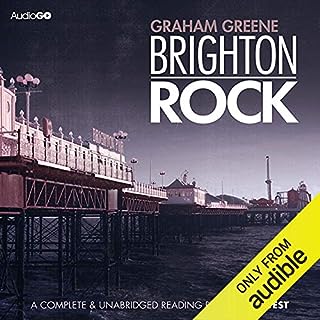 An unabridged audio edition of Graham Greene's classic gang-war thriller. A gang war is raging through the dark underworld of Brighton. Pinkie, malign and ruthless, has killed a man. Believing he can escape retribution, he is unprepared for the courageous, life-embracing Ida Arnold, who is determined to avenge a death.... Read by Samuel West.

Strong storyline skilfully written to carry you along nicely.

Ida Arnold the kind hearted non-Catholic (unlike Pinkie and Rose) with confirmed moral views that lead her on to become the detective of the story.

Which character – as performed by Samuel West – was your favourite?

Spicer. For some reason I liked that simpleminded character. At the same time I think Samuel West's performance of all characters in the novel is excellent. 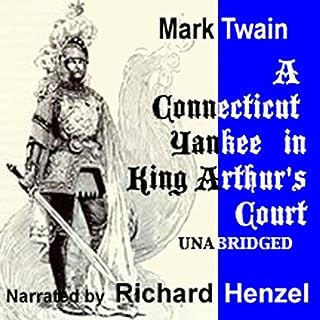 Hank Morgan is a mechanic, an engineer, and a foreman at the Colt Arms Factory. One day he gets into an argument, "conducted with crowbars," with an employee known as "Hercules." A blow to Hank's head sends him back to King Arthur's England in the Sixth Century.

What made the experience of listening to A Connecticut Yankee In King Arthur's Court the most enjoyable?

The performance is charming without ever being overdone. The Connecticut accent is perfect and the more difficult English characters are well done through Hank Morgan's interpretation.

I thought that this book was an ingenious way for Mark Twain to get across his clear belief that even a fledgling imperfect, commercial, democratic way of life is far better than an aristocracy Lording it over an uneducated people who are made afraid and weak by their masters and priests with laws handed down from God hampering the people at every turn. Although the masses through generations of the same treatment, accept it without question.
Hank tries to help them while he is doing the best for himself too.
It is clever, well told, moves along nicely, even educational but mostly it is entertaining. 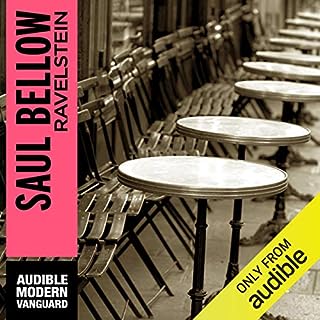 Abe Ravelstein is a brilliant professor at a prominent midwestern university and a man who glories in training the movers and shakers of the political world. He has lived grandly and ferociously-and much beyond his means. His close friend Chick has suggested that he put forth a book of his convictions about the ideas which sustain humankind, or kill it, and much to Ravelstein's own surprise, he does and becomes a millionaire.

The fact that it was about two real people. One being the author.
This book lead me on to get Prof Allan Bloom's book 'The closing of the American mind' here on Audible. And that book lead me on to many more audiobooks, firstly, 'Democracy in America' (1840) by Alexis de Toquville, then Will Durant's fantastic 'The Story of Philosophy' after that, book after book almost automatically suggested itself since they were cited in the three books above.

His performance of the main characters sound very like Saul Bellow and Allan Bloom. His reading in general is very good.

Ravelstein is Saul Bellow's final novel. Published in 2000, when Bellow was eighty-five years old, it received widespread critical acclaim. It tells the tale of a friendship between two university professors and the complications that animate their erotic and intellectual attachments in the face of impending death. The novel is a roman à clef, written in memoir-form. The narrator is in Paris with Abe Ravelstein, a renowned professor, and Nikki, his lover. Ravelstein asks him to write a memoir about him after he dies, because he has AIDS. After his death, the narrator and his wife go on holiday to the Caribbean. The narrator catches a tropical disease and flies back to the United States in convalescence. Eventually, on recuperation, he decides to write the memoir.The title character, Ravelstein, is based on the philosopher Allan Bloom, who taught alongside Bellow at the University of Chicago's Committee on Social Thought. Remembering Bloom in an interview, Bellow said, "Allan inhaled books and ideas the way the rest of us breathe air... People only want the factual truth. Well, the truth is that Allan was a very superior person, great-souled. When critics proclaim the death of the novel, I sometimes think they are really saying that there are no significant people to write about." But "Allan was certainly one."(ALL OF THE ABOVE IS FROM WIKIPEDIA) 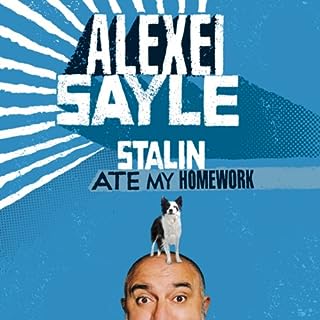 Very funny and (almost) stranger than Alexei's fiction....Alexei knew he was doomed to be different the day he was taken to see Sergei Eisentein's Alexander Nevsky instead of Walt Disney's Bambi. Born on the day that egg rationing came to an end, Alexei grew up with his parents and the Soviet Weekly. Each year they holidayed in Eastern Europe, where they were shown round locomotive factories and the sites of Nazi atrocities.

If you are familiar with Alexei Sayles work as a ground-breaking comedian, being both original and exceptionally honed in his craft, and thought to yourself, how did he get like that? Well, this book explains it all (ish).
The book is touching and endearingly well written and with Alexei reading it, it is probably the best way of experiencing the story. Did I mention that it is also extremely funny too. Alexei Sayle comes across as a really nice man from a wonderfully loving and interesting family.
Enjoy, I certainly did. 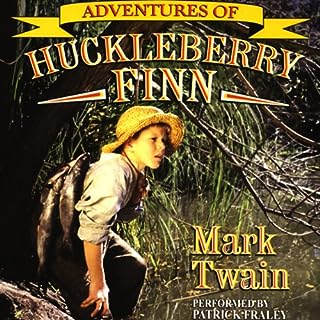 Ernest Hemingway said regarding Adventures of Huckleberry Finn, "All modern American literature comes from [this] one book by Mark Twain...it's the best book we've had." In this unabridged reading performed by Patrick Fraley, author and actor together provide storytelling genius, balancing youthful escapades against an important social message.

Brilliant but not PC

Pat Frawley's performance of this book is outstanding. The story is simple, interesting and beautifully written. As a long time member of Audible I now have a collection of over 100 books, but this is the only book that I have listened to again immediately after the first listening. For the sensitive listener this book, published in 1884, is not particularly politically correct as the so called 'N' word is used 219 times. So don't be shocked.
Touching and captivating.
5 Stars.