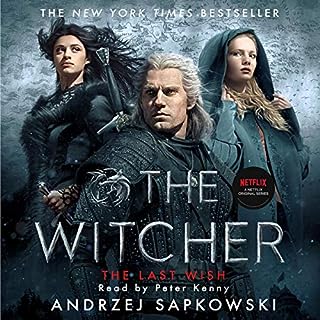 Good build up of the Witcher's world and the characters, often presenting intriguing situations with shades of grey (an nice juxtaposition to the black & white of the fairy tales it derives stories from).

Have you listened to any of Peter Kenny’s other performances? How does this one compare?

I only know Peter Kenny by his Witcher work, and it is all top-drawer. Easily the best audiobook performance I've ever heard. Delivers dialog with character, emotional nuance and differentiated voices.

Definitely. But pleasingly, as a short story collection with an overarching narrative, it holds up well to brief bursts too.

The translation is very good, and presents an interesting and coherent story in English. Dialog feels well-written and natural, with little to mark it as a translation rather than native.That "little bit" is the tendency to repeat the chapter titles in the dialog, which occasionally feels forced. In the original Polish Sapkowski is praised for his intricate wordplay, so I think these title repeats are non-translatable pieces of writing.

This tiny oddity is why I have deducted a point from the story. However I feel this book is very strong despite this minor flaw, and the voice acting is beyond criticism.

Anyone who wonders if the narrative strengths of the witcher III is repeated in the books, I can assure you that it is. These books match the best mileu and characterisation of the game.

11 of 15 people found this review helpful