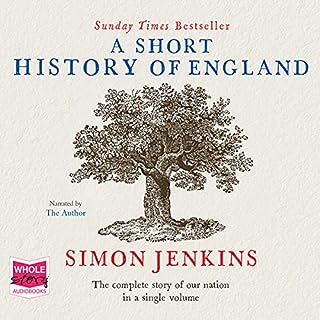 Which battle was fought 'For England, Harry and St George'? Who demanded to be painted 'warts and all'? What - and when - was the Battle of the Bulge? In A Short History of England, bestselling author Simon Jenkins answers all these questions - and many more - as he tells the tumultuous story of a fascinating nation. From the invaders of the Dark Ages to today's coalition, via the Tudors, the Stuarts and two world wars, Jenkins weaves together a gripping narrative with all the most important and interesting dates in his own inimitable style.

Considering this is only 9 hours in length, Simon Jenkins manages to portray a detailed chronology dating back from ancient formations of the British Isles up to 21st century Britain!

Whilst tackling England, Jenkins still manages to keep the welsh, Irish and Scottish relevant! Specifically in medieval law, the welsh are mentioned often. Specifically during the First World War, the Irish get a good narrative following the Easter risings. And the Scottish get their detail covering the Norman/Saxon era, parallel to the rise of vikings!

Unsurprisingly, some eras receive greater coverage than others. In medieval and early modern periods, the majority of coverage is on the substitutions of kings and queens, dependent on Norman and saxon invasions.

Society doesn’t get much mention until the monarchy appears challenged as being constitutional. It takes until the Elizabethan Era and the Mary Queen of Scots controversy for English society to get its rightful mention. From that point on, the influence of high politics takes a decline, as social attitudes begin to take more of Jenkins narrative.

With the two world wars, Jenkins drops a lot of anecdotes and passages, and reverts back to high politics and world history, with England being a passenger into larger world issues.

Unfortunately, Jenkins lacks key details on the collapse of empire in this part, with only brief mention of African and Indian colonisation. Whilst he felt it to be appropriate to mention the ‘british’ empire of Wales, Scotland and Ireland, he did not find it so with further empire.

Post world wars, Jenkins focuses on the patterns in politics and specifically, economic factors alongside the respective prime minister. Once again, Jenkins swiftly references foreign policy with England, this time with the USA. President/Prime Minister relations leads the reader through Thatcher and Blair’s governments nicely.


Finally, Jenkins impresses once more with a general analysis of 21st century England. He broadly touches on the influence of decentralised England- noting the distant relations with England alongside the British Isles and Europe more generally. He also foreshadows a decentralised England, as Westminster appears to be loosing its influence, just like the monarchy done a century prior...