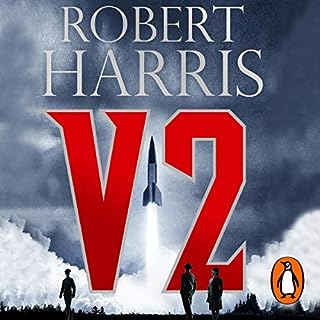 On the brink of defeat, Hitler commissioned 10,000 V2s - ballistic rockets that carried a one-ton warhead at three times the speed of sound, which he believed would win the war. Dr Rudi Graf who, along with his friend Werner von Braun, had once dreamt of sending a rocket to the moon, now finds himself in November 1944 in a bleak seaside town in Occupied Holland, launching V2s against London. No one understands the volatile, deadly machine better than Graf, but his disillusionment with the war leads to him being investigated for sabotage.

Robert Harris a master story teller combining fact and fiction, this story will keep the listener spell bound,the narration by David Rintoul provides a unique synergy between Harris and Rintoul bringing to life a fictional story that provides a great story leaving the Listener satisfied, but wanting more, I loved every minute of it, superb. 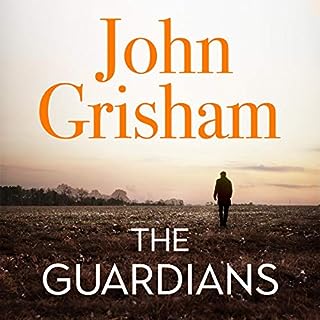 He was framed for murder. Now he needs someone on the outside to save him. For 22 years Quincy Miller has sat on Death Row without friends, family or legal representation. He was accused of killing Keith Russo, a lawyer in a small Florida town. But there were no witnesses and no motive. Just the fact that Quincy was black in an all-white town and that a blood-splattered torch was found in the boot of his car. A torch he swore was planted. A torch that conveniently disappeared from evidence just before his trial.

Grisham at his very best!

Grisham has a unique skill in taking the ever complicated American legal system and guiding the reader/ listener through its complexities.Michael Becks narration and use of various accents and dialects brings the story to life, the synergy of these two, Grisham and Beck will enthrall the listener, Grisham at his very best with a story that will make one think deeply about wrongfulness. 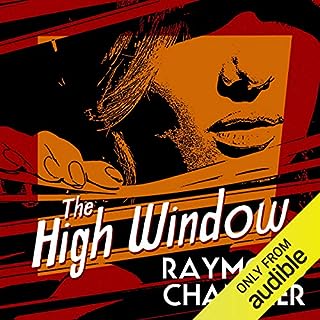 Philip Marlowe's on a case: his client, a dried-up husk of a woman, wants him to recover a rare gold coin called a Brasher Doubloon, missing from her late husband's collection. That's the simple part. It becomes more complicated when Marlowe finds that everyone who handles the coin suffers a run of very bad luck: they always end up dead. That's also unlucky for a private investigator, because leaving a trail of corpses around LA gets cops' noses out of joint.

Raymond Chandler a Master story writer, perfect synergy when the story is narrated byRay Porter. An easy listen if you need to relax and be taken to another place, loved it. 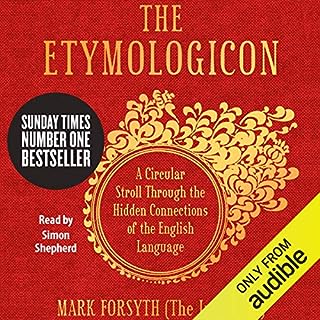 A quirky, entertaining and thought-provoking tour of the unexpected connections between words, read by Simon Shepherd. What is the actual connection between disgruntled and gruntled? What links church organs to organised crime, California to the Caliphate, or brackets to codpieces? The Etymologicon springs from Mark Forsyth's Inky Fool blog on the strange connections between words.

Excellent, for those that prefer to understand!

This is both entertaining and informative, Simon Shepherds narration is perfect. Whilst this audible copy is perfect to dip in and out of, I am motivated to buy a hard copy to use as a reference. If you enjoy the English language then this is an excellent introduction to Etymology. 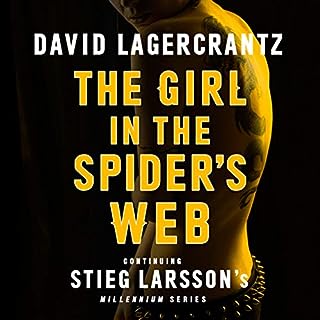 Mikael Blomkvist is contacted by renowned scientist Professor Balder. Fearing for his life, but more concerned for his son's well-being, Balder wants Millennium to publish his story. More interesting to Blomkvist than Balder's advances in Artificial Intelligence, is his connection with a certain female superhacker. It seems that Lisbeth Salander, like Balder, is a target of ruthless cyber gangsters that will soon bring terror to the streets of Stockholm, the Millennium team....

For the many fans that were familiar with the previous three novels this continuation from David Lagercrantz is a must read. The narrator Saul Reichlin provides synergy to the different writing style and his performance I felt was excellent the introduction of certain special effects enhanced the delivery and added to the overall experience in a positive way, whilst the story was enjoyable it lacks a certain element that I find difficult to explain overall it was enjoyable and left me wanting to continue with the other parts. 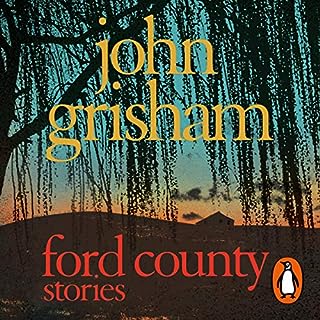 In his first collection of short stories John Grisham takes us back to Ford County, Mississippi, the setting of his first novel, A Time To Kill. Wheelchair-bound Inez Graney and her two older sons, Leon and Butch, take a bizarre road trip through the Mississippi Delta to visit the youngest Graney brother, Raymond, who's been locked away on death row for 11 years.It could well be their last visit.

John Grisham is a Master story writer and whilst it was interesting to hear him tell the stories, he really should have these stories told by narrators like Dennis Boutsikavis or Michael Beck, Grishams delivery is like listening to the American version of Alistair Cook, great for factual descriptions but not good for delivering the characters. Overall the stories are as usual just excellent. 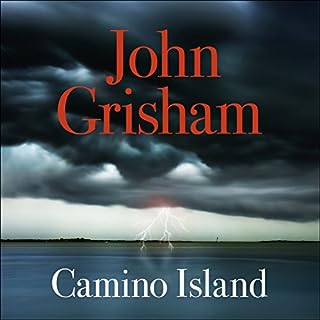 All trails became dead ends. Tips that had at first seemed urgent now faded away. The waiting game began. Whoever had the manuscripts would want money, and a lot of it. They would surface eventually, but where and when, and how much would they want? The most daring and devastating heist in literary history targets a high security vault located deep beneath Princeton University. Valued at $25 million, the five manuscripts of F. Scott Fitzgerald's only novels are amongst the most valuable in the world....

Excellent, probably the best robbery ever.

An excellent story, fast paced beautifully scripted a real page turner, or marathon listen. The superb narration by January LaVoy is impeccable as she sets the pace and brings each character to life providing easy to distinguish accents and colour to each of the protagonists, John Grisham delivers and is the Master of the story. 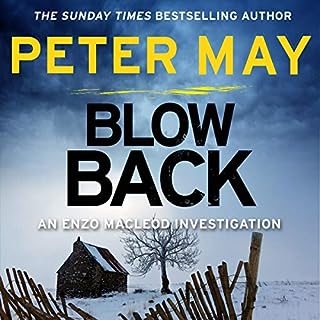 The fifth Enzo thriller, from the best-selling author of Coffin Road, Entry Island and the Lewis Trilogy. Puy-de-Dôme, France. Footprints in the snow lead to the murder scene of Marc Fraysse, France's most celebrated chef - brutally shot before he could make the revelation of his career. Seven years on and the mystery still raw, Enzo Macleod, forensic investigator, forays into the heated world of haute cuisine to uncover bitter feuds and a burning secret. The Fraysse family history is as twisted as Enzo's own.

If you are a fan of Enzo

Then this is an excellent story with many twists and turns and more background detail to the character of Enzo himself, a great listen for those that are hooked on Enzo. 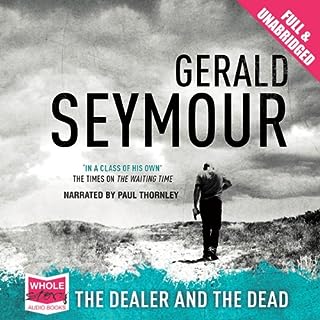 Eighteen years after the barbarous war with the Serbs that tore their communities apart, a group of Croatian villagers discover the identity of the Englishman who they believe betrayed them by reneging on a deal to supply arms. With revenge in sight at last, they hire a professional killer from London to track him down... but is the story as simple as they think?

Multi dimensional plot delivered exceptionally well, giving a view of recent history in the former Yugoslavia. Each character is skill-fully portrayed as we have come to expect from this master story teller, if you are a fan of Gerald Seymour then this story will not disappoint. 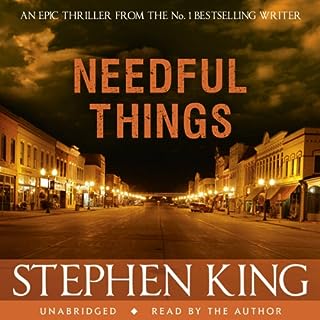 There was a new shop in town. Run by a stranger. Needful Things, the sign said. The oddest name. A name that caused some gossip and speculation among the good folks of Castle Rock, Maine, while they waited for opening day. Eleven-year-old Brian Rusk was the first customer and he got just what he wanted, a very rare 1956 Sandy Koufax baseball card. Signed. Cyndi Rose Martin was next. A Lalique vase. A perfect match for her living room decor. Something for everyone.

I really enjoyed this story and part of the enjoyment is to have the author read his own work so you just know the narration is exactly how King wanted it, the introduction f short clips of music adds a further dimension that adds greatly to the experience. For King enthusiasts this is a great story with lots of threads, Kings skill is to use common language as he paints a picture in the respondents mind bringing the characters and players to life. Just excellent, I enjoyed from beginning to end.