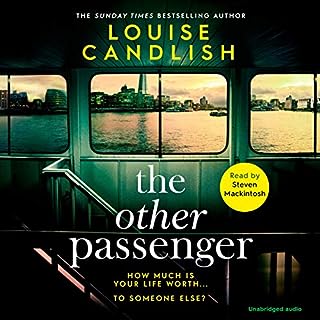 It all happens so quickly. One day you're living the dream, commuting to work by riverbus with your charismatic neighbour Kit in the seat beside you. The next, Kit hasn't turned up for the boat and his wife, Melia, has reported him missing. When you get off at your stop, the police are waiting. Another passenger saw you and Kit arguing on the boat home the night before, and the police say that you had a reason to want him dead. You protest. You and Kit are friends - ask Melia, she'll vouch for you.

Classic Louise Candlish at her best

This is the best book I have listened to this year truly outstanding. I was gripped from the beginning and could not stop listening. The casting of Steven Mackintosh was inspired he so perfectly captured the fundamental qualities of Jamie, shallow, somewhat a loser and easily bewitched by Melia. Louise Candlish is the master of middle class intrigue and perfectly captures the neuroses of those with wealth and the tension that exists in relationships with those that don't. The main characters in this book are brought together and the relationship that evolves is toxic for all involved. I loved the backdrop of the Thames and the riverboat. This is such a clever story and I really never saw the twist and double twist at the end coming. Cant wait for her next book. 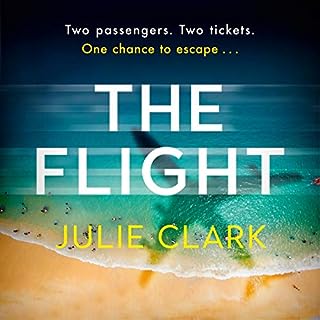 Claire and Eva lead very different lives, but they have one thing in common - they are both in huge danger and need to disappear. A chance encounter at the airport presents the two women with a simple but crazy solution: switch places and then drop off the grid when they land. But one woman will never reach her destination.

I enjoyed this book and found it to be different from the usual psych story. Two women seemingly unconnected but both running from something exchange identities. What follows is very clever and interesting and keeps the listener engaged until the very end. The only gripe I have is the narrator who at times really grated with a very specific intonation for some characters. This did not spoil the listen as the story is so good. 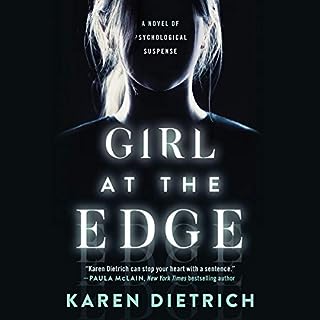 A thrilling nature-versus-nurture psychological suspense novel about a daughter trying to deny her worst impulses and distance herself from her violent and dangerous father.

I was really looking forward to this book. The story seemed very interesting and posed the question of nature or nurture and what happens to the children of mass murderers?
I have to say I was disappointed, I have not read this author before and I found her style overly descriptive of moments in time but did not really delve into the main theme of the book what were the main characters motivations and drivers. There was very little exploration of he relationship to her mother or how own feelings about her father and what he had done. The end was very flat and did not really answer any questions I had about the premise of the book. 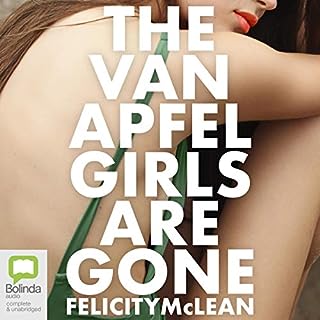 Tikka Molloy was 11 and one-sixth years old during the long hot summer of 1992, growing up in an isolated suburb in Australia surrounded by encroaching bushland. That summer, the hottest on record, was when the Van Apfel sisters - Hannah, the beautiful Cordelia and Ruth - mysteriously disappeared during the school's Showstopper concert, held at the outdoor amphitheatre by the river.

Superior in every way beautifully written

I loved this book it was so beautifully written I was captivated and transported to Australia and the lives of the Van Apfel girls. The dialogue was superb and the story telling from the point of view of a teenager was handled so well. I loved the narrator who captured her character so well. There is not dramatic twist to this book and there is a great deal left unsaid but I enjoyed every moment of this wonderful novel. 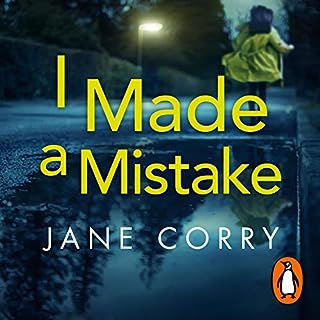 In Poppy Page's mind, there are two types of women in this world: those who are faithful to their husbands and those who are not. Until now, Poppy has never questioned which she was. But when handsome, charming Matthew Gordon walks back into her life after almost two decades, that changes. Poppy makes a single mistake - and that mistake will be far more dangerous than she could imagine. Someone is going to pay for it with their life....

Wasted an hour on this!

Even Emilia Fox could not save this one. I normally love her narration but this book was just not for me. I gave up after an hour of listening to descriptions of people in the waiting room of a police station and the random dialogue from some woman from Liverpool. I don't know if this book ended up going anywhere but I did not bother to wait and see. 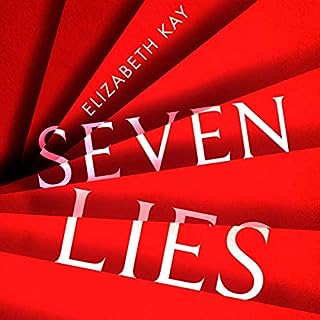 It all started with one little lie.... Jane and Marnie have been inseparable since they were 11 years old. They have a lot in common. In their early 20s, they both fell in love and married handsome young men. But Jane never liked Marnie's husband. He was always so loud and obnoxious, so much larger than life. Which is rather ironic now, of course. Because if Jane had been honest - if she hadn't lied - then perhaps her best friend's husband might still be alive.... This is Jane's opportunity to tell the truth. The question is: Do you believe her?

Very enjoyable listen. This was a clever book with a real twist I loved the is she good or bad element to the main character it kept me guessing right to the end. 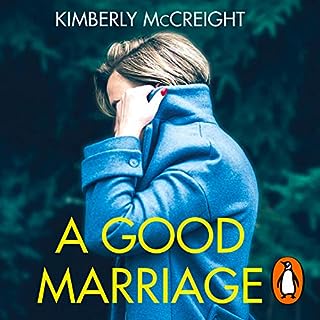 When young lawyer Lizzie gets a call for help from an old friend accused of murdering his wife, she reluctantly says yes. Zach is the chief suspect in his wife, Amanda’s, murder but there’s no way he could be guilty – is there? The further Lizzie dives into the glossy world of Brooklyn’s Park Slope, the more she realises that things don’t add up. Zach doesn’t know the most basic details of his wife’s past, and Amanda’s friends barely know he exists.

Good Book But Lacking in Pace

This should have been a good book. It started out well with a clever storyline, the murder of a wife supposedly by a super rich tech entrepreneur, but it ended up a bit lacking and flat. I had to keep going back chapters as I kept losing concentration. The pace was very slow and nothing much happened during the middle of the book. When all was revealed it all seemed a bit flat and pointless. I also got really confused by the characters and did not really feel involved or care about any of them. 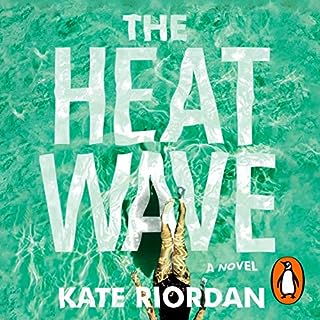 In Provence, under a sweltering sun, Sylvie returns to the crumbling family home of La Reverie. In her hand is the letter that summoned her, and by her side is Emma, her youngest daughter. Yet every corner of the house is haunted by the spectre of Elodie, her first child. Beautiful, manipulative Elodie, whose long-ago death the villagers still whisper about. Sylvie has tried to put the past behind her. But like the spreading forest fires, memories of Elodie seem to be creeping ever closer. Because there's a secret Sylvie has concealed about what happened to Elodie.

I loved everything about this book. It is set in the South of France and flips between the seventies and nineties it is so beautifully written that is is easy to be transported there. The characters are totally believable and the dialogue excellent no rambling it is precise and relevant. I loved the unfolding of Elodie's story set against Sylvie and Emma's relationship in the present. This is one of those books I did not want to end and I felt quiet bereaved when I had finished it. The narrator was excellent and I loved her slipping into a French accent as she narrator Sylvie and Elodie.
Great listen. 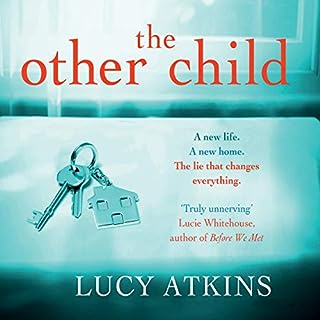 Sometimes a lie seems kinder than the truth...but what happens when that lie destroys everything you love? When Tess is sent to photograph Greg, a high-profile paediatric heart surgeon, she sees something troubled in his face and feels instantly drawn to him. Their relationship quickly deepens, but then Tess, single mother to nine-year-old Joe, falls pregnant, and Greg is offered the job of a lifetime back in his hometown of Boston.

Good Story spoilt by the narrator

This book was completely spoilt for me by the narration. The main character Tess is English so I could not understand why the narrator told her story in an American accent and then voiced her dialogue in a weird English accent. Generally, the story was ok but I never really understood why Tess would move to America with Greg at such short notice dragging a small child. The characters were all a bit one dimensional with no real motivation behind them, and there was some sort of weird subplot involving Greg and his early life (spoiler alert) but it seemed to fizzle out and go nowhere. Finally I was sick to death of Tess's pregnancy by the time she gave birth, her stomach had a storyline all of its own and the listener was subject to continuous updates about its 'clenching', twisting' etc. I so enjoyed Lucy Atkin's other book Magpie Lane and this was a huge disappointment. 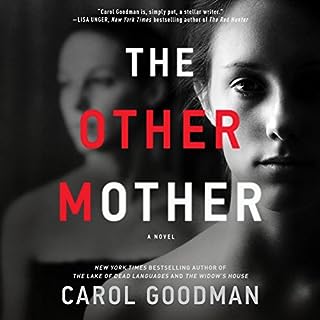 When Daphne Marist and her infant daughter, Chloe, pull up the gravel drive to the home of Daphne's new employer, it feels like they've entered a whole new world. Tucked in the Catskills, the stone mansion looks like something out of a fairy tale, its lush landscaping hiding the view of the mental asylum just beyond its border. Daphne secured the live-in position using an assumed name and fake credentials, telling no one that she's on the run from a controlling husband who has threatened to take her daughter away.

This book started off well, the story was interesting and the psychological twist of the two women meeting and merging identity was clever. Sadly about two thirds through I realised that this book was going to have a really silly end. The twist in the plot is so unbelievable it is just plain daft to say may is a spoiler alert so can't really expand beyond that. Aside from the plot I never really connected with any of the characters both women were uninteresting and the husbands never really developed as characters. The dialogue did not really hold my attention and the narrator not particularly good. All told a waste of nine hours.