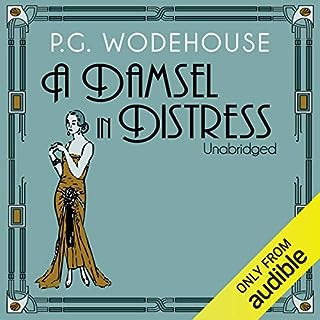 When Maud Marsh flings herself into George Bevan's cab in Piccadilly, he starts believing in damsels in distress. George traces his mysterious travelling companion to Belpher Castle, home of Lord Marshmoreton, where things become severely muddled. Maud's aunt, Lady Caroline Byng, wants Maud to marry Reddie, her stepson. Maud, meanwhile, is known to be in love with an unknown American she met in Wales. So when George turns up speaking American, a nasty case of mistaken identity breaks out.

A treat to rival any Jeeves book

Where does A Damsel in Distress rank among all the audiobooks you’ve listened to so far?

I devoured all the Jeeves books (two or three times each) but I hadn't thought to explore other P G Wodehouse books. How silly of me and what a lot of lovely catching up I have to do. This was my first venture into non-Jeeves stories and it was delightful; a great start for anyone fearful of leaving behind their dear friend Bertie and venturing into unfamiliar waters. The characters in a Damsel in Distress are familiar in their Wodehouse-ness and the story is immediately appealing. And good old Jonathan Cecil as narrator; no one reads Wodehouse better than Cecil.