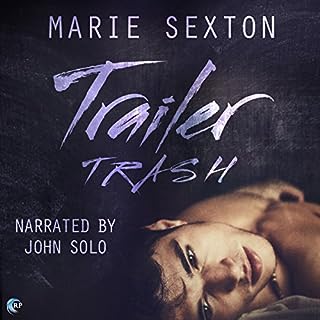 It's 1986, and what should have been the greatest summer of Nate Bradford's life goes sour when his parents suddenly divorce. Now, instead of spending his senior year in his hometown of Austin, Texas, he's living with his father in Warren, Wyoming, population 2,833 (and Nate thinks that might be a generous estimate). There's no swimming pool, no tennis team, no mall - not even any MTV.

If you liked the two movies quoted above, then you’ll definitely love to listen to this - I highly recommend!!

Not sure if there are any plans to continue the story (I hope so!), but definitely should be a sequel to this!! 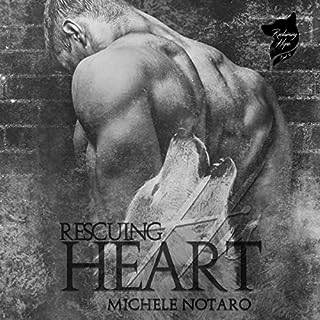 Kai: I’ve been dreaming of him for about a year, but I don’t know why. I have no clue who he is. But when a crazed shifter captures me and starts torturing me for information about the blond-haired stranger, I start to realize that he might be the only one that can save me...and I have no clue how to reach him from the prison I’m trapped in. Patty: I can’t get that green-eyed stranger out of my head. I’m drawn to him.... I know what he is to me...but he works for the enemy, for the Ministry, so he’s off-limits.

This was another a good listen, but I have to say, not as captivating as the first.
The storyline as a whole was good, but it just lacked ‘that something’ that the first book had.
Whether it was because of such a gap between release of the audiobook (9 months!), I can’t say for definite, but it took me a lot longer to listen to than the first audiobook, (9 days, wheareas I finished the first audiobook in 3 days).
The character of Paddy was good, because of his history with the villain Edward, but Kai, his character came across as vapid and not quite the sharpest knife in the drawer, if you catch my drift and probably why I didn’t enjoy this story so much.

I just found it really difficult to keep my attention in the story. If it wasn’t for the characters ‘Chris & Spence’ with their humour throughout the audiobook keeping my attention, I think I would have lost I the plot (literally!)

Overall I’d give it 5🌟, but it was the storyline in the end that dropped it to 4🌟

Here’s hoping that book 3 isn’t going to take another 9 months and the storyline/characters improve. I hope book 3 is about Chris and his vampire - that will definitely be more interesting! 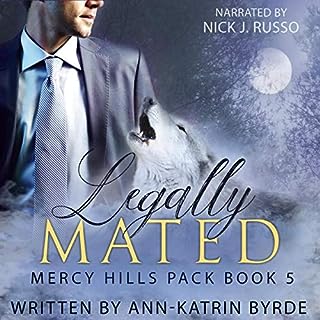 More than a century ago, the Segregation Laws made enemies of humans and shifters, and imprisoned the pack behind their enclave walls. Laine wants Garrick. He wants him out from behind those walls and being what he was meant to be - a brilliant lawyer. He also wants to claim Garrick openly as his partner, but with the prejudice on both sides, he’ll never get what he wants. Unless he can pull off something spectacular.

Yet another fine instalment from this great series.
This one definitely goes into more detail about the ‘True Omega’ and what it is actually starting to mean.
I do love this series of audiobooks as it has a fine mix of everything, without leaving anything out or cliffhangers.

The only negative thing I have to say is, the audiobook format comes out a lot later than the actual book release. Apart from that issue, it is a fantastic listen from beginning to end.

I highly recommend, but you will really benefit from listening to this series in order, to fully understand the characters as they are mentioned regularly in each book as new characters are introduced. 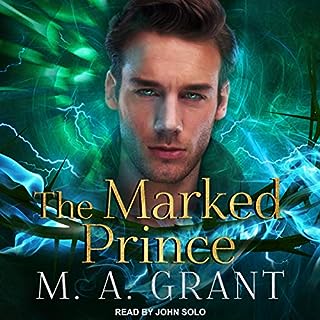 The Summer Court is nothing like Sebastian remembers. The oppressed lower classes are drained of their magick, and around every corner political intrigues threaten an already unstable regime. Sebastian's only hope of surviving the Court and bringing home Prince Lyne's traitorous brother lies with Duine, a magickless Unseelie servant desperate to win his freedom. A servant for whom Sebastian, an estranged Seelie royal himself, is developing a dangerous and deepening affection.

As expected, as great as the first and more!!

Marion, your concept, imagination is astounding, thank you for another great story to listen to again 🙌

I so can’t wait for Book 3 to be released on Audible, sadly at present, nothing showing on the website at the moment, but I know you said that it would be this month and book 4 in the summer.
Will book 1.5 be released around the same time as book 3 on Audible? Or before/around book 4?

Again, thank you John Solo for another magickal listen and the journey through yet another great book!

Again, I highly recommend, especially if you like/love fantasy fiction with a twist - but is recommended for adults - I recommend you also listen in book order to understand the full story and characters. 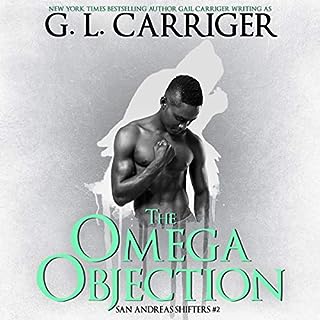 A werewolf walks into a bar. Tank is working as a bouncer when he notices something odd about the sexy-as-sin bartender. He’s odorless, he’s amazingly popular with shifters, and he’s terrified. A man without a smell. Isaac is trying to escape his past. He hides in San Francisco, because everyone knows that there are no werewolves in the Bay Area. Until one walks into his bar. Can a gentle werewolf with a trampled heart show a man who’s been running scared that sometimes there are monsters worth running towards?

Yet Another Fantastic Listen!

This book is just awesome!

I thoroughly enjoyed the first book, and listening to this audiobook has equalled and surpassed the first.

The humour, highs and lows, sass and storyline is just fantastic. I said in my previous review on the first book that, G L Carriger‘s humour was TJ Klune like - I feel unjustified in the correlation.
G L Carriger has made the humour her own in her own right, yes, the humour is similar, but not the same.
This book has shown this more so than her prior book and shows the humour and sass in her own right!

I truly hope that there are going to more stories in the San Andreas Shifters series, a LOT more!

I can’t get enough of this series and the fact I have listened to over 30hrs (2 books) in 2/3 days I feel speaks volumes of how captivating the characters and storyline is for this series.

When in book 3 going to be released??? 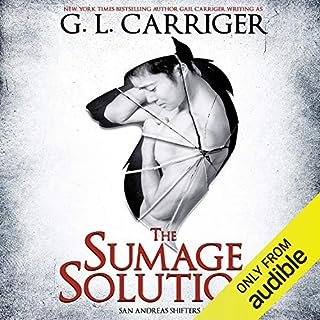 Can a gentle werewolf heal the heart of a smart-mouthed mage? New York Times best-seller Gail Carriger, writing as GL Carriger, presents an offbeat gay romance in which a sexy werewolf with a white knight complex meets a bad-boy mage with an attitude problem. Sparks (and other things) fly.

Wasn’t Sure What To Expect...

But I have been surprisingly entertained, loved the puns and the individual characters brought to life by Kirt Graves.
The storyline is fluid, the characters amusing but the main characters Max and Bryan (Biff) are a match made in heaven.

Absolutely loved this audiobook and hope that the author will write more stories about Max & Bryan in this series - as we have to find out what the new turn of events will mean for the powerful duo.

So if you’re reading this review (@ GL Carriger), please write more stories for this great couple?!!

If you like Ann Kathryn-Byrd’s Mercy Hills Pack Shifters and TJ Klune’s Green Creek series, you will definitely love this!

I Highly recommend! Keep up the good work 😊 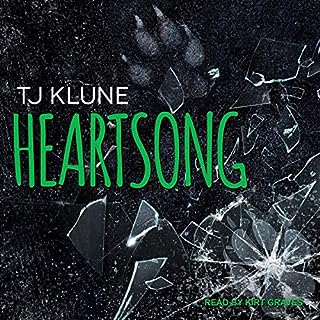 All Robbie Fontaine ever wanted was a place to belong. After the death of his mother, he bounces around from pack to pack, forming temporary bonds to keep from turning feral. It's enough - until he receives a summons from the wolf stronghold in Caswell, Maine. Life as the trusted second to Michelle Hughes - the Alpha of all - and the cherished friend of a gentle old witch teaches Robbie what it means to be pack, to have a home. But when a mission from Michelle sends Robbie into the field, he finds himself questioning where he belongs and everything he's been told.

Never did I think I could find a series of books that one after another they would captivate me.
I definitely found that with this series!

TJ Klune and Kirt Graves have yet again have pulled out all the stops with this storyline leaving the reader/listener yearning for more.

I so can’t wait for ‘Brothersong’ to be released through Audible, and hope, that isn’t going to be the end of the Bennett saga just yet?!

Definitely worth 5 🌟 across the board yet again! 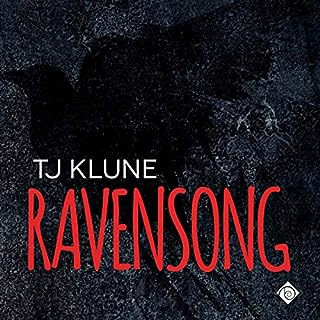 Just fantastic! I really find it hard to say anything more!
This is definitely in my top 5 books of all time.

The whole series is great - the first book (Wolfsong) was great, loved it. This book has surpassed the first. Next is book 3 ‘Heartsong’.

If it’s anything like this, and probably then some, I’m going to be on tenterhooks waiting for ’Brothersong’ to be released on Audible.

This series of books is just magnificent, and if you like fantasy fiction with werewolves, witches and plenty sass, you will love this series too.

I highly recommend this and guarantee satisfaction!

The narration by Kirt Graves is excellently performed, each character brought to life with such feeling and empathy, it just hits you.
I’d be very surprised to hear if someone didn’t shed a tear in parts of the story, just excellent performance.

Definitely worth 5 stars across the board!! 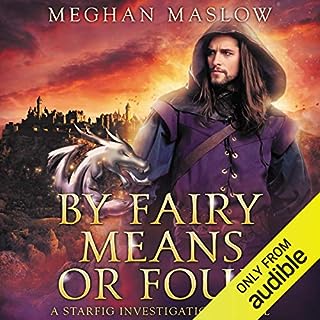 The last thing half-dragon, half-fairy private investigator Twig Starfig wants to do is retrieve a stolen enchanted horn from a treacherous fae, but there's no denying the dazzlingly gorgeous unicorn who asks Twig to do just that. Literally, no denying, because compelling the reluctant detective is all part of a unicorn's seductive magic. 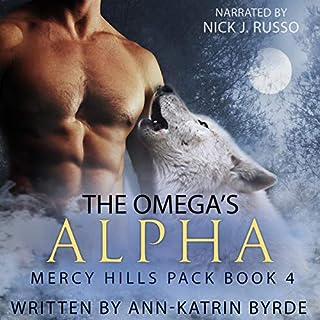 Barren, unwanted - a lot of omegas would have given up. But not Holland. Tired of living down to others' opinions, he reaches for something more and seduces the new alpha, only to fall so far in love he can’t see the moon for the trees. Quin’s ghosts won’t leave him alone. He lives like a ghost himself, but Holland’s shining light gives him courage to reach for healing and, maybe, a family.

I Absolutely Love This Series!

Especially the shifter history as it entwines within the plot of the series.
The somewhat lost/omitted stories of ‘True Omegas’ and in this book especially, there seems to be a lot more spoilers of this particular part of shifter history which I thoroughly enjoy.
Of all the characters so far, I love Holland - his whole persona is just magnetic and I just love his attitude - reminds me a little bit of me 😆

I highly recommend and guarantee you will love this series if you appreciate mmpreg audiobooks (this is my preferred reading format - sadly for medical reasons).

The only frustration is the frequency in which they are released in audio format. I know a lot of the time that the expense is out of the pocket of the authors themselves, and that sometimes it can be at a loss, as well as the costs of the narrator too - this I wholly appreciate, but frustrating all the same when you have such a great series as this, but books that are published as far back as 2017 are only now available in audiobook format.

I am so ready for book 5, but not available as yet, or a possible release date if any 😞

Please please can this be soon?? I really want to read eventually the conclusion of the packs true history and what it is that makes a true omega so special! 😊