Written after The Lion, the Witch, and the Wardrobe but designed by C.S. Lewis to be read first, this enchanting prequel, with its story of time travel, sorcery, and magic rings, is essential reading for anyone who wants to learn the backstory to the biggest movie release of the year. Hurled back in time to the birth of a new world, two young friends get caught in the epic struggle between Aslan and his nemesis the White Witch.

Great! - but that formatting!

The book is great and the narration is excellent but Audible needs to reformat these books for use with modern devices like Alexa. The files are split into sections rather than chapters so (for example) if I ask Alexa to read from chapter 4, it goes to SECTION 4 which is almost at the end of the book. The same is true of many other books on Audible, like the Sherlock Holmes set with Stephen Fry etc. It is a shame because even with a small book like this you will not probably listen to it in one sitting.

Ever since he made his first appearance in A Study In Scarlet, Sherlock Holmes has enthralled and delighted millions of fans throughout the world. Now Audible is proud to present Arthur Conan Doyle's Sherlock Holmes: The Definitive Collection, read by Stephen Fry. A lifelong fan of Doyle's detective fiction, Fry has narrated the complete works of Sherlock Holmes - four novels and five collections of short stories.

Layout is an issue

This would have been an undoubtable 5-star review. Sherlock Holmes read by Stephen Fry - of course - 5 star! However it is very difficult to navigate to individual books let alone stories and practically impossible on Alexa. 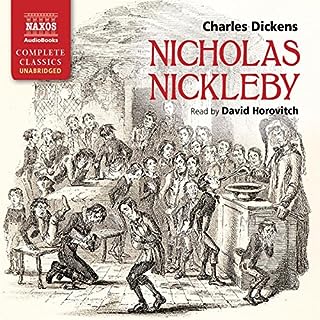 One of Dickens’ earlier novels, dating from 1839, it charts the fortunes of an honorable young man, Nicholas Nickleby, who has set out to make his way in the world. Dickens presents his remarkably vivid display of Victorian characters and the life they lead, from the generous to the fated to the crushed. Hope springs eternal, however, and righteous persistence brings rewards.

Which character – as performed by David Horovitch – was your favourite?

Smike was excellently portrayed, as was Ralph

The narration was outstanding - one of the best I've come across.