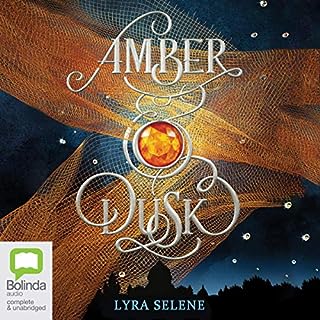 A lush and thrilling story of sacrifice, secrets, and star-crossed love set in a Parisian-inspired world where the sun never sets in this remarkable YA fantasy debut. Sylvie has always known she deserves more. Out in the permanent twilight of the Dusklands, her guardians called her power to create illusions a curse. But Sylvie knows it gives her a place in Coeur d'Or, the palais of the Amber Empress and her highborn legacies. So Sylvie sets off toward the Amber City, a glittering jewel under a sun that never sets, to take what is hers.

I loved the storytelling. A unique magic system, palace intrigue, new romance .. it’s great. I was however distracted quite a lot by the narrator who was very breathy and would often make gasping noises as she was taking a breath in, just before speaking a new sentence. It was so distracting that I nearly returned the book at the beginning... however the book was gripping enough that I continued listening and have just purchased the second book, and just learned to put up with it. But it’s the first time I’ve ever heard a narrator do this! 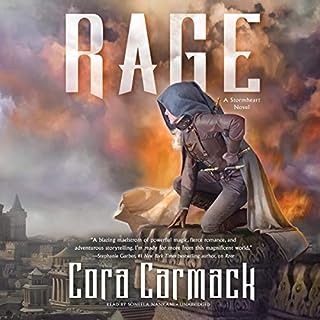 Princess or adventurer. Duty or freedom. Her Kingdom or the storm hunter she loves. If Aurora knows anything, it's that choices have consequences. To set things right, she joins a growing revolution on the streets of Pavan. In disguise as the rebel Roar, she puts her knowledge of the palace to use to aid the rebellion. But the Rage season is at its peak, and not a day passes without the skies raining down destruction. Yet these storms are different - they churn with darkness and attack with a will that's desperate and violent.

Although I think this book was slower in some places than the first book was, it was still wonderful to be back in the world of Pavan and get to know all the characters a bit more. I especially loved some of the new friendships and romances that happened in this book, and I didn’t expect that ending at all! And now I’m really looking forward to the third book to see what happens next!! 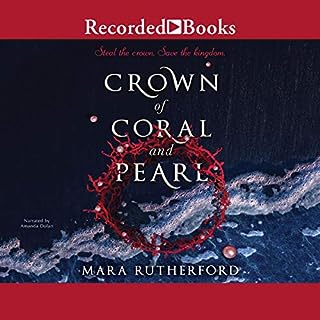 Nor once dreamed of seeing the wondrous wealth and beauty of Ilara, the kingdom that's ruled her village for as long as anyone can remember. But when a childhood accident left her with a permanent scar, it became clear that her identical twin sister, Zadie, would likely be chosen to marry the Crown Prince - while Nor remained behind, unable to ever set foot on land. Then Zadie is gravely injured, and Nor is sent to Ilara in her place. To Nor's dismay, her future husband, Prince Ceren, is as forbidding and cold as his home - a castle carved into a mountain and devoid of sunlight.

I couldn’t stop listening to this! I’m not sure how to describe it.. fantasy with beautifully written scenery so vivid you could feel yourself there! And a very unique story centered around the sea/lakes and water. I loved the descriptions of society and the different way of life they had. There are lots of dark twists and turns as well and wonderful characters and a lovely romance. Looking forward to the next book 💛 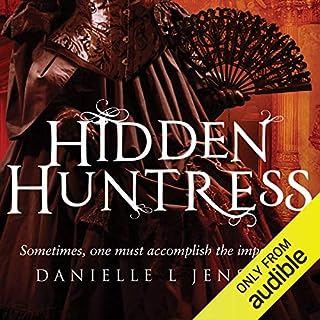 Beneath the mountain, the king's reign of tyranny is absolute; the one troll with the capacity to challenge him is imprisoned for treason. Cecile has escaped the darkness of Trollus, but she learns all too quickly that she is not beyond the reach of the king's power. Or his manipulation. Recovered from her injuries, she now lives with her mother in Trianon and graces the opera stage every night. By day she searches for the witch who has eluded the trolls for 500 years.

A great second book. Some second books in the series can become slow paced but not this one! So much interesting stuff happened and I loved learning about all the characters more :) 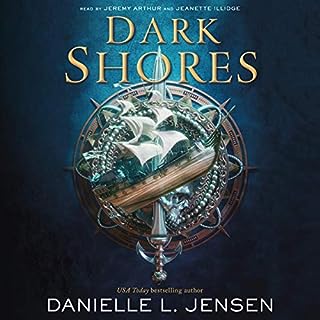 In a world divided by meddlesome gods and treacherous oceans, only the Maarin possess the knowledge to cross the Endless Seas. But they have one mandate: East must never meet West. Teriana is the second mate of the Quincense and heir to the Maarin Triumvirate. Her people are born of the seas and the keepers of its secrets, but when her closest friend is forced into an unwanted betrothal, Teriana breaks her people’s mandate so her friend might escape - a choice with devastating consequences.

Great roman inspired fantasy! Really unique and I loved the characters. Plus the slow burn romance 💛 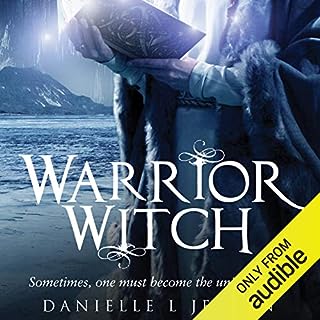 Cécile and Tristan have accomplished the impossible, but their greatest challenge remains: defeating the evil they have unleashed upon the world. As they scramble for a way to protect the people of the Isle and liberate the trolls from their tyrant king, Cécile and Tristan must battle those who'd see them dead. To win, they will risk everything. And everyone.

I am so glad that this book was recommended to me. Beautiful and imaginative and the romance was wonderful - the story really pulls you in! I love the world of the trolls/fae - the story and characters are so well developed and easy and fun to listen to. 💛😊 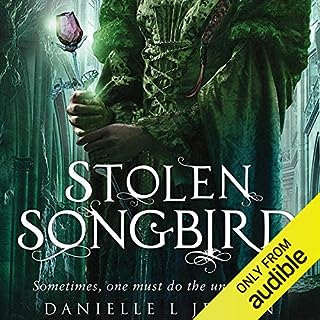 For five centuries, a witch's curse has bound the trolls to their city beneath the ruins of Forsaken Mountain. Time enough for their dark and nefarious magic to fade from human memory and into myth. But a prophesy has been spoken of a union with the power to set the trolls free, and when Ccile de Troyes is kidnapped and taken beneath the mountain, she learns there is far more to the myth of the trolls than she could have imagined.

This was recommended to me when I asked people about a book that was similar to A court of thorns and roses. And yes it is kind of similar but also completely amazing in its own right. I can’t believe it took me this long to discover this book. I adore Tristan! Now onto the next book!! 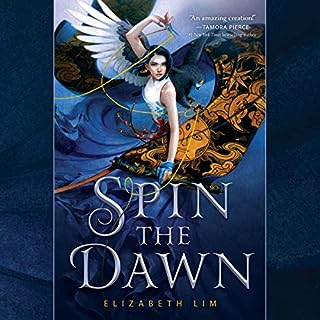 Maia Tamarin dreams of becoming the greatest tailor in the land, but as a girl, the best she can hope for is to marry well. When a royal messenger summons her ailing father, once a tailor of renown, to court, Maia poses as a boy and takes his place. She knows her life is forfeit if her secret is discovered, but she'll take that risk to achieve her dream and save her family from ruin. There's just one catch: Maia is one of 12 tailors vying for the job.

Beautiful imaginative story with wonderful narration! Definitely recommend to fans of fantasy, YA and romance! 💛 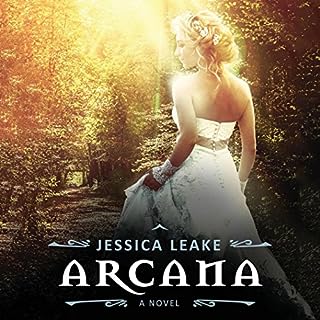 Amid the sumptuous backdrop of the London season in 1905, headstrong Katherine Sinclair must join the ranks of debutantes vying for suitors. Unfortunately for Katherine, she cannot imagine anything more loathsome - or dangerous. To help ease her entrance into society, Katherine’s family has elicited the assistance of the Earl of Thornewood, a friend and London’s most eligible bachelor, to be her constant companion at the endless fetes and balls.

I wa hooked from the first few lines! I heard about this author through her other books and am so glad I did. A cross between Jane Austen and fantasy worlds.. I wish the second book in the series was available on audible too, although this book can also be listened to be as a stand-alone. 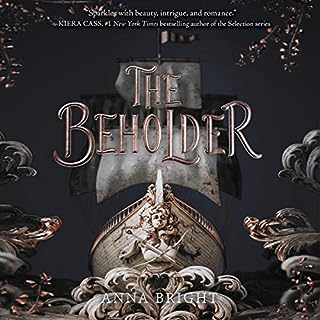 Selah has waited her whole life for a happily ever after. As the only daughter of the leader of Potomac, she knows her duty is to find the perfect match. But after an excruciatingly public rejection, Selah’s stepmother suggests an unthinkable solution: Selah must set sail across the Atlantic to visit a series of potential suitors - and if she doesn’t come home engaged, she shouldn’t come home at all. From the gardens of England to the fjords of Norge, Selah’s quest will be the journey of a lifetime. But her stepmother’s schemes aren’t the only secrets hiding belowdecks.

“The thigs we like are different. The things we love, are the same”.

This was beautifully written, and everything I was hoping for! I think the fact it was marketed as an “Odyssey” retelling might have thrown people off, as it’s not really anything like that - I would say it’s more similar in genre/plot to the Glittering Court series / the selection series. So if you liked either of those I would think you would love this too. We follow Selah as she journeys through various countries, meeting eligible suitors, but there are a few twists and turns which I did not see coming. There is a lot of romance, which is beautifully done. The descriptions are vivid and the language so beautiful that it is poetic at times. And the ending was a big twist! I am really looking forward to the second book but am also hoping a few of the characters from this book make an appearance, as I fell completely in love with them!
One thing that is difficult to follow is where all the various countries are, so a pdf map would be great for the next book. Overall, highly recommend!