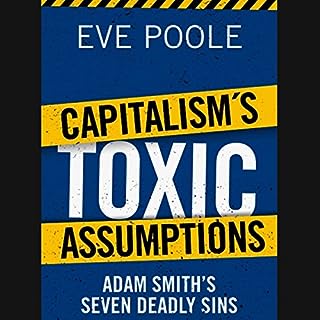 In science, no -one believes the Earth is flat anymore. Economists, on the other hand, haven't budged from their original worldview. Market capitalism depends on seven big ideas: competition, the "invisible hand", utility, agency theory, pricing, shareholder value, and limited liability. These served the world well in the past, but over the years they have become cancerous and are slowly killing the system as a whole.

What was most disappointing about Eve Poole’s story?


Adam Smith’s name will probably be prominent when almost all current writers are forgotten. Not that this should immunise his ideas from scrutiny. He paid no respect to the standing of the influential people of his day.

The main problem with this book is the starting point. Smith’s main work was ‘An Inquiry into the Nature and Causes of the Wealth of Nations’. This could be ‘Why Adam Smith is wrong’. Adam Smith realised facets of how the economy worked and then shone this light on the practices of mercantilists, guilds, capitalists and others to show how their actions were damaging the common good. ‘Capitalism’s Toxic Assumptions’ seems to (sorry I didn’t get past chapter 2) recognise an incompatible alternative to someone’s ‘perfect world’, attack it in any half plausible manner and then try to put something together from whatever’s lying around.

If someone has a strong sense the state should be taking a greater part in our lives, if they build a reasoned case a philosopher like Adam Smith, and a even a lesser one like myself would happily consider it. Its not that the author isn’t engaged and there aren’t any interesting and telling observations, its just that I couldn’t see an underlying rationale. When the starting point is nearly always the denigration of an idea its incredibly difficult to keep the critical faculties in tact. As it was I couldn’t get past chapter 2. I really wanted to be collaborative and did try to restart a couple of times after stopping.

Before taking on board the contents, particularly chapter 2 on the invisible hand, please read a classical economics account, if not Wealth of Nations 1600+ pages, then something accessible like The Undercover Economist.

We shouldn’t be dragging such an important topic down in to the quagmire of partisan politics, particularly not in these polarising times.

Collaboration rather than competition.