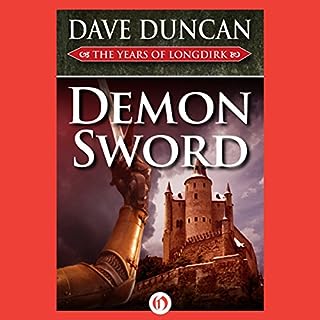 All of Europe is under the control of the Khan, whose conquering armies swept across the West in 1244. Scotland, in addition, lies under the heel of England. Young Toby Strangerson, a half-English bastard, reared by a witchwife, wants only to shed his hated "Sassenach" blood and free his beloved highlands. Toby wields a sword as the outlaw Longdirk. The sword can cut down men like so many stalks of corn. But stranger winds are swirling and howling across the lochs, eldritch winds that are ridden by "hobs" and "wisps" and demons.

I was expecting more

What could Dave Duncan have done to make this a more enjoyable book for you?

It's not a bad book as such but not up to the standards I'm used to from Dave Duncan. I listened to all 8 books in the consecutive series "A man of his word" and "A handful of men" basically in a row and loved them. I really like the serie about Nostradamus and await the third book in the serie "Brother Magnus" and remember "The seventh sword" as very good but this I felt I had to force myself through. I figured it might just be slow in building up and I'd get into it but no. I've listened to the two first and might give the third a chance later just because I don't like not having the ending of a story but it's not something I'll read again. 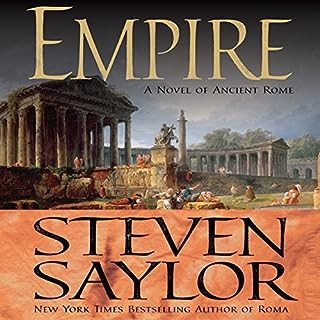 The Pinarii witness the machinations of Tiberius, the madness of Caligula, and the decadence of Nero. The deadly paranoia of Domitian gives way to the Golden Age of Trajan and Hadrian - but even the most enlightened emperors wield the power to destroy their subjects on a whim.Empire is filled with the dramatic, defining moments of the age, including the Great Fire of 64 A.D, Nero’s persecution of the Christians, and the astounding opening games of the Colosseum.

Would you try another book written by Steven Saylor or narrated by James Langton?

Since I've been recommended his serie "Roma sub rosa" from friends whom I usually like the same books as I want to try one of those before giving up on Saylor but if it's anything like "Empire" I'll never try another.

Would you listen to another book narrated by James Langton?

I think so. I have nothing against the narrator but it's hard to be fair when I really disliked the book so. That's why performance got 3 stars and the story 1.

I had high expectations based on recomendations of his "Roma sub rosa" books and since he studied history. I was very disappointed about how this book focuses so much on the sex, gore, madness and humiliation and affirms cliches that are known to be historically inaccurate. I don't expect every detail in an historical fiction book to be right but this was to much. I really tried to listen through and hoped it would be better but realist I was waisting my time.

I'm glad Audible has a system for refound wich I will use for the first time now.