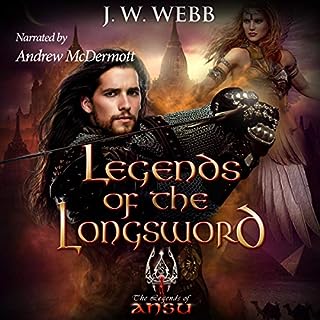 The wolf is back! Big sword, bad attitude. He’s left the regiment but Corin’s problems have only just begun. Now someone’s out to get his boss. Corin returns from an aborted mission in Permio to discover a female assassin has taken Silon’s daughter and means to sell her into slavery. Corin is charged with getting Nalissa back before they lose track of her captor. What follows is a hectic chase over land and sea, as Corin fights to keep his job and the skin on his back. Meanwhile, new enemies, treacherous allies, and a lethal shapeshifter all conspire to work against him.

As good as the first if not better!

After really enjoying the first installment of this series I was really looking forward to this story and I was not disappointed, set in an interesting universe the main characters are likable and the story seems to move along at a nice pace. This felt like a different type of story to the last but it was just as good if not better. The narrator does a great job at bringing the characters to life and I am looking forward to the next installment.


Please be aware that I was given a free copy of this audiobook to provide a non-bias review. 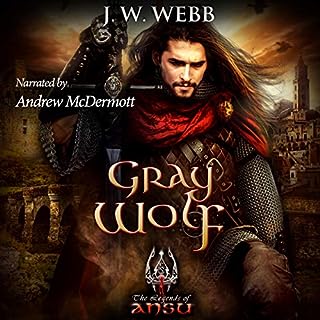 Raiders stole his childhood. It's time Corin made them pay. When his parents are murdered, and his sister taken by raiders, Corin's world crashes in on him. Wild and willful, he joins the elite Wolf Regiment but swiftly falls foul of its swordmaster, the brutal Taskala. Corin, caught in the treacherous power play between rival factions and corrupt leaders, struggles to survive. Torn between his quest for vengeance and growing hatred for the sadistic Taskala, Corin has to intervene when the woman he loves becomes the latest target of Taskala's wrath.

I really enjoyed this story, set in an interesting universe the main characters are likable and the story seems to move along at a nice pace. My only little niggle is that he seems to get very good with the sword very quickly but it doesn't take away from the story in any way. The narrator does a great job at bringing the characters to life and I am looking forward to the next installment.


Please be aware that I was given a free copy of this audiobook to provide a non-bias review. 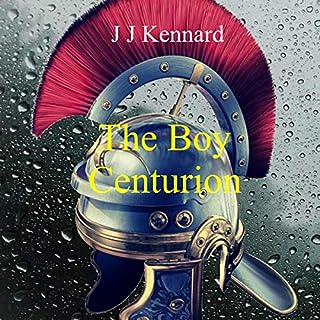 AD 383. Emperor Magnus Maximus orders the northern legions of Britannia to withdraw. The lumbering retreat is fraught with danger, as local tribes and warlords seek to capitalize on the power vacuum left by the Romans. This is the story of Atticus, the 15-year-old son of a cohort tribune from the sixth legion. Trapped behind the walls of a garrison, with only an aging centurion and his men for protection, Atticus must use both ingenuity and bravery to survive.

As the author indicates this book was inspired by Simon Scarrow's Eagles of the Empire series and after finishing it you can see the similarities so if you liked them then you will like this. I would say that Simon Scarrow's series is the better read but there is not much between them. 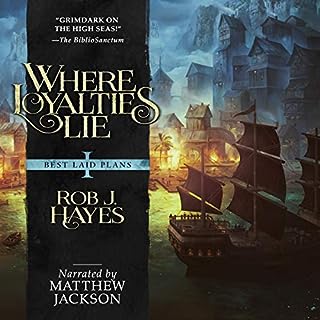 As the fires of a dying city burn on a distant shore, Drake sees an opportunity to unite the other pirate captains under his flag and claim himself a crown. If he is to succeed he will need allies and credibility. Who better than gentleman pirate, Keelin Stillwater, renowned for taking ships without bloodshed, as well as his skill with a sword. Enemy ships sail their waters, setting the Pirate Isles ablaze. The sinister Tanner Black threatens to steal the throne before Drake has even sat in it....

This was an interesting listen, containing lots of intrigue and plots. I have never listened/read anything like this before but I really enjoyed it. The characters are engaging, each being well written and brought to life by the narrator. 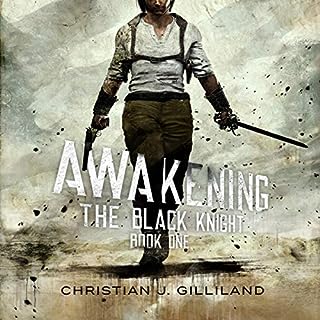 War. Betrayal. A rare man committed to his oath. The world was destroyed nearly a millennium ago, yet conflicts continue to rage. In the events that lead up to the Second Duraani World War, Crinnan Jamiso, Centurion of Black Knight, fights his way through the overgrown ruins of an Ancient city. The world's mightiest powers pursue him and he needs to choose wisely when deciding who is friend and who is foe.

At first I was a little bit unsure about this book as it seemed to take a while to get going but I am glad that I carried on because after 20mins I was hooked. The story is set in an interesting universe where you are constantly wondering what has happened to create this world. The characters are written well with the tale told using the point of view of 3-4 key people.

I was nervous about what the quality of the narration would be like when I saw that it was done by the author but he does a brilliant job giving distinctive voices for each character.

I was given a free copy of this book to provide a non biased review and i can honestly say that I cannot wait for the next installment and will be buying it when it is released. 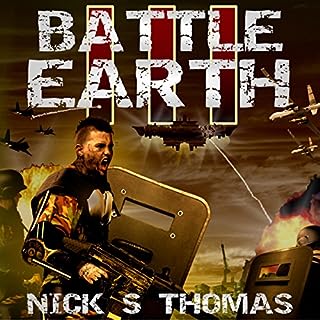 The third installment of an epic new science fiction trilogy that tells of humanity's desperate struggle to survive against an overwhelming alien invasion. Reinforcements from across the world have brought the battle in Germany to a bitter standstill. Faced by increased pressure from the humans, the Krycenaean invaders call in troops from the Moon to mount a new offensive. On Earth, Major Taylor learns that Captain Friday may still be alive, but held a prisoner.

A great conclusion to a great series, if you have not already done so read/listen to the first two books in the series to help you to really enjoy this one although I am sure that it would still be enjoyable if not.

The writing and narration continue at their high standard making it a very easy listen.

The story is ripe for a follow up and I cannot wait for it!!! 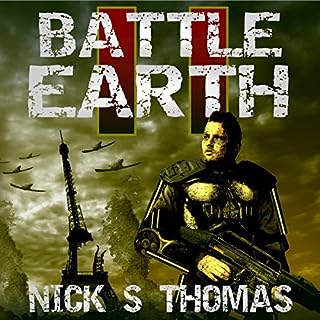 After halting the enemy advance across Europe, the war continues to rage in Paris. International armies have converged on the French city to make a stand. When Taylor investigates a mysterious sighting in their northern perimeter, he sees that enemy forces are encircling the city. The humans are quickly running out of ways to flee from the death trap.

I am glad to say that this story is just as good if not better than the first in the series. The quality of the writing and narration continues at its high standard and I finished it in no time.

I already have the next book ready to go and I cannot wait!!

Please note that I was provided with a free copy of this audiobook to give a non-biased review. 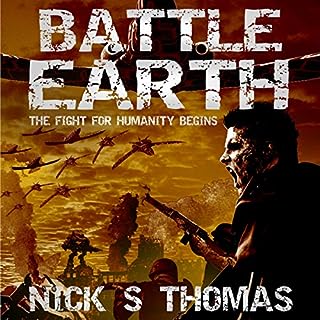 A distress transmission from Mars research colony warns of an advanced and unknown enemy approaching the heavily populated lunar colony. An elite marine unit commanded by Major Mitch Taylor is dispatched to protect the beleaguered civilians. However, the attack is merely a prelude to a massive invasion of Earth.

This book had me gripped from the very beginning, the story, characters, narration were all top notch and I went straight onto the next installment of the series once this one was finished.

If you like well written, fast paced sci fi action then this is the story for you!! 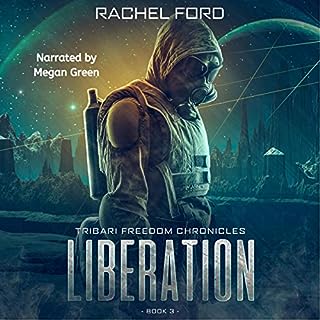 A mutineer fleet commander. An abandoned miner. A reformer’s widow. A convicted Protector. Four destinies. One empire. From the frozen prison planets to the glistening streets of Central, corruption and cruelty is tearing the Tribari Empire apart. Four unlikely heroes find themselves on a collision course as they work to save their worlds. If they can’t find a way to bridge their differences, there may be no empire left to protect.

A great concluion to a great series

I really enjoyed this book, it is different from the normal Sci-Fi that i listen to or read in that this was more about society and the oppression of working class citizens rather than just blowing stuff up.
You really need to have read/listened to the two previous books before this one to really appreciate it as you will find it difficult to catch up otherwise.

I went straight from the last book to this as I wanted to find out what happened as it left you wanting more.

Please note that I was given a copy of this audiobook to provide a non-biased review. 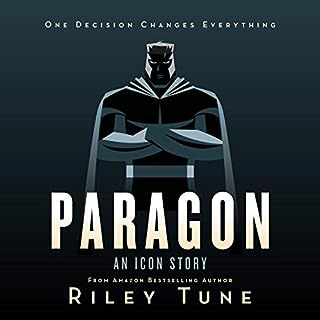 Hero or villain. A choice that every Icon, a person born with powers, eventually has to make if they don’t want to live a life of mediocrity. For most Icons the decision is easy. Just do what your parents did. Then, there is Hunter Monroe. A powerful young Icon born from the unimaginable union of a hero and villain. Seventeen years later Hunter is seen as a half-breed abomination by some, and as a certified powerhouse by others. With his time at Purgatory Academy, the premier institute for Icons, coming to an end, Hunter must embark on a two year internship with a supergroup.

I have now read/listened to a few super hero books over the past few months and I am really enjoying the genre. This one stands a little different with the main character not knowing if he is going to be a hero or villain.
The story is nicely paced with a good mix of action and scene setting/story setting. The narrator does a great job managing both male and female voices without sounding silly.

Overall this was a very enjoyable story and I will be reading book 2 next!!!