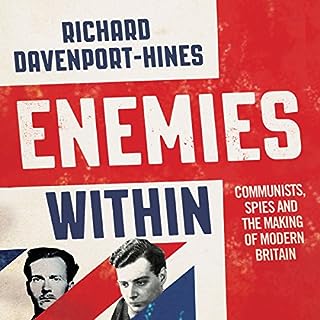 What pushed Blunt, Burgess, Cairncross, Maclean and Philby into Soviet hands? With access to recently released papers and other neglected documents, this sharp analysis of the intelligence world examines how and why these men and others betrayed their country and what this cost Britain and its allies.

The author expands greatly on the predominant contemporary accounts of spy rings, amplified by popular fiction and unreliable memoirs, and, of course, journalists, especially but not confined, to the right-wing mass market tabloids.
He has something of a mission to exculpate class as a major factor in espionage for USSR from within security services, not entirely convincingly. OK, Cairncross wasn’t “posh”, but it’s stretching it to claim Burgess, Blunt, Philby and Maclean were well down the pecking order of the complex English class system.

The incomprehension between UK & USA culture, and its consequences for cooperation in matters of security and diplomacy are well explained.

The witch-hunt which followed the first discoveries of Soviet spies in UK/USA, especially the latter, was tragic. It is no absolution to claim other countries behaved more cruelly. 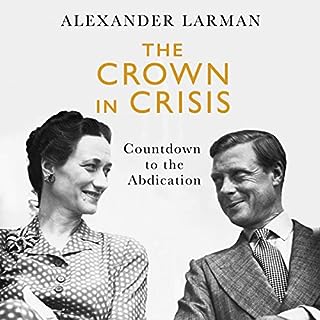 In December 1936, Britain faced a constitutional crisis that was the gravest threat to the institution of the monarchy since the execution of Charles I. The ruling monarch, Edward VIII, wished to marry the American divorcée Wallis Simpson and crown her as his queen. His actions scandalised the establishment, who were desperate to avoid an international embarrassment at a time when war seemed imminent. That the king was rumoured to have Nazi sympathies only strengthened their determination that he should be forced off the throne, by any means necessary.

I thought throughout the book the author was from USA, as he kept referring to “the King of England”, with a single exception, when quoting Edward VIII’s abdication speech, which used the proper title!
It does undermine a writer’s credibility when such an obvious mistake is made, but would have been more forgivable in an American writer.
However, it is an interesting story of the crisis in UK which preceded the big much more nasty one of the ‘39-45 war.
Edward VIII would not have been up to the challenge of being head of state throughout WWII and decolonisation. His younger brother Bertie -George VI - & niece Elizabeth maintained a dignified presence in the world.
Churchill was a malign influence in the intense negotiations which threatened the UK constitution as the result of Edward’s determination to marry, willy-nilly, a twice-divorced American adventuress.
The rôle of newspaper barons (unelected, unaccountable, mephistophelian) was already established. The reticence of the UK press was conditional, political, quid pro quo, but abroad royal shenanigans were cash in the bank. It is difficult now to imagine an era when news (and rumour) did not travel instantly.
The reputation of Stanley Baldwin should be re-evaluated in light of his management of the abdication crisis.
Great romance? No. 1936 had far more important issues to deal with than a spoilt playboy king and his obsession with one of his married mistresses. 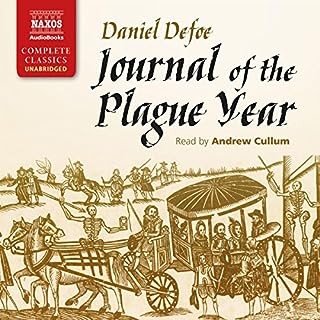 First published in March 1722, 57 years after the event that struck more than 100,000 people, Journal of the Plague Year is a compelling portrait of life during London's horrific bubonic plague. Through the eyes of H.F. (speculated to be Defoe's uncle, Henry Foe, from whose journals the book was supposedly adapted) we witness great grief, depravity and despair: crazed sufferers roam the streets, unearthly screams resound across the city, death carts dump their grisly loads into mass graves, and quackery and skulduggery feed on fear. But there is kindness and courage too, as mutual support and caring are upheld through the worst of days.

I would probably have rated this book less highly before Covid-19 arrived., though I have read about the Black Death and “Spanish” flu before this pandemic.
Defoe was but a wee boy when this plague epidemic occurred but it seems believable that he had an account by an older relative on which to draw, and has obviously done considerable research, far more than expected of a historical novelist then, and even now.

The plague is a far more deadly, infectious, and ghastly disease than the present pandemic, but nevertheless many of the measures taken to contain it and the behaviour of the population are now familiar to us. The destruction of the economy of London, and consequently of England was severe. All non-essential businesses collapsed. European trade was impossible.
Of course, as usual, the wealthy fled at the first hint of threat, the affluent stockpiled the necessities of life, and the poor tried to stay alive.
The authorities in London, however, did not flinch, and stayed to mitigate as best they could the disaster that had overwhelmed their city.
The reactions of the citizens weren’t very different from those we’ve seen this year, from panic to complacency, from denial to pseudoscience, from evasion of regulation to altruism.
Rumours and misinformation managed to spread even without newspapers and social media.
I don’t usually have much time for Defoe, English spy and agent provocateur in pre-1707 Scotland, but his analysis of the Plague Year reveals intelligence and a wisdom I have to concede, grudgingly. 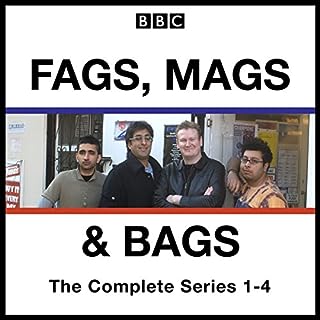 Ramesh has built his shop up over the course of 30 years, and it is a firmly entrenched feature of the local area. He is ably assisted by Dave, a 40-something underachiever who shares Ramesh's love of the art of shopkeeping, even if he is treated like a slave. Then, of course, there are Ramesh's sons, both surly and not particularly keen on old-school shopkeeping. However, they are the natural successors to the business, and Ramesh is keen to pass all his worldly wisdom on to them - whether they like it or not....

An everyday story of small shopowners in the wee town of Lenzie (near Glasgow). Ramesh, Indian by birth, has run his confectionery/newsagent/convenience shop for 30y, assisted by his best pal, Dave, and hindered by his 2 Scots-Asian sons in different ways. Naturally locals drop in regularly, with their foibles, including the local priest, a blether with a weak grasp of theology but a commitment to inter-faith friendship.
There are a few jarring concessions to English listeners (Lenzie would have a provost, not a mayor, a minister not a vicar) but generally I found the craic therapeutic after months in lockdown. I hope small businesses like Ramesh’s will not be lost in the pandemic. 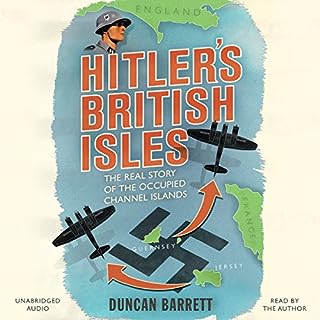 In the summer of 1940, Britain stood perilously close to invasion. One by one, the nations of Europe had fallen to the unstoppable German Blitzkrieg, and Hitler’s sights were set on the English coast. And yet, following the success of the Battle of Britain, the promised invasion never came. The prospect of German jackboots landing on British soil retreated into the realm of collective nightmares.

The German Occupation of the Channel Islands (or Anglo-Norman Islands) is more or less a footnote in the history of WWII. It was even a minor detail at the time, except for those involved. Churchill left the islands pretty much to their fate, except for a few ill planned sorties which made life worse for the islanders, and liberating the islands was low priority.
This book is well worth a go. 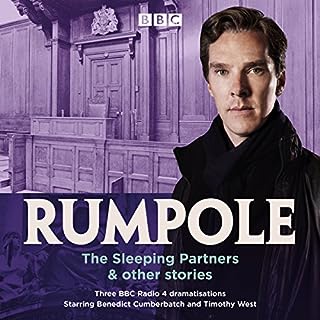 The immortal Rumpole, created as a TV series, transformed into books, now renewed as radio drama with an impressive cast, adapted to 21st century - not by transposing the stories to the present, but by sharpening up their settings in time. John Mortimer wasn’t terribly good on continuity (names/dates often inconsistent) as he himself admitted, and this series is more coherent. Timothy West is great as the older Rumpole and Benedict Cumberbatch as his younger self. 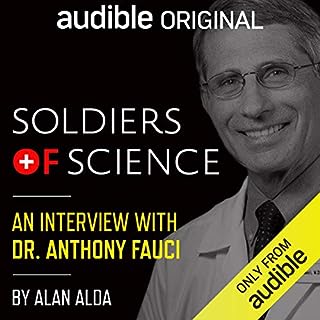 Before the COVID-19 pandemic made Dr. Anthony Fauci a household name, he played a pivotal role in American medicine for over 50 years, as a physician trained in the crucible of medical crisis and an effective researcher who supported medical breakthroughs. Get to know the man behind the sobering and stabilizing presence on TV, and hear the fascinating personal history that equipped him to keep our nation informed about COVID-19.

Dr Fauci, on the side of the angels

To my shame I didn’t recognise Dr Fauci’s name when he became to grownup in the White House as the true threat of Covid-19 was finally, if partially, in some quarters recognised in USA.
I must have read some of his papers in the literature but hadn’t realised what an enormous part he’d played in identifying HIV & developing effective treatments.
He is a clear communicator, dedicated to public service and groundbreaking research.
Heaven forbid that his voice does not continue to be heard. It’s impossible that the touchy grandiose greedy Trump will like what Fauci has to say, and it’s probable Trump will sack him sometime soon, but the USA will suffer when that happens. 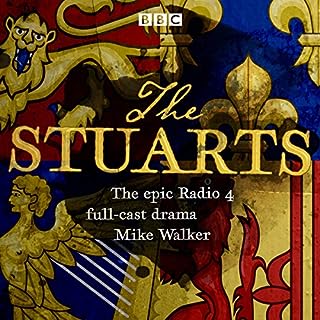 Eleven BBC Radio 4 full-cast dramas telling the stories of Mary Queen of Scots and the Stuart royals. Under the Stuarts, Britain entered the modern world. But with great change came turmoil, and for 111 years, the Stuart monarchs faced dynastic struggles, religious conflict, the rise of parliamentary democracy - and civil war. These dramas chart that turbulent epoch through its royal family, from Mary, Queen of Scots to the ‘last Stuart’, Bonnie Prince Charlie’s daughter Charlotte.

The other royal dynasty

Tudors are overdone. Stuarts aren’t just Mary, Queen of Scots and Charles I!
Unfortunately the early Stuarts (up to James V) aren’t included, as their lives and times were just as turbulent and contradictory.
This series of plays, though all written by the same author, have varying formats. I see a few instances of dramatic licence and naturally there is selection of the events covered - no reign could be fully recounted in a play of one hour. Good acting as expected from BBC Radio drama. 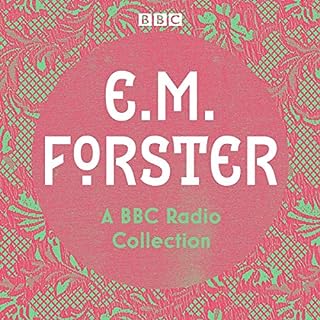 Dramatisations and readings of EM Forster’s finest works, plus Stephen Wakelam’s radio play A Dose of Fame and the documentary feature Forster in India: Sex, Books and Empire. One of the greatest English novelists of the 20th century, EM Forster was also an accomplished short story writer. This collection includes stunning adaptations of his classic novels A Passage to India, Where Angels Fear to Tread, A Room with a View and Howards End. Among the star casts are Penelope Wilton, Ellie Kendrick, Sian Thomas, Emilia Fox, Sheila Hancock and John Hurt.

Forster’s best known bills presented in BBC dramatisations plus some of his shorter works narrated from BBC archives. Whether you’ve read the books, seen the distractingly sumptuous cinema adaptations, or both, or neither, it’s good value. 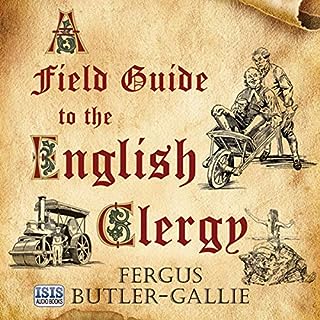 Judge not, lest ye be judged. This timeless wisdom has guided the Anglican Church, fostering a certain tolerance of eccentricity among its members. Good thing, too. The 'Mermaid of Morwenstow' excommunicated a cat for mousing on a Sunday. When he was late for a service, Bishop Launcelot Fleming commandeered a navy helicopter. 'Mad Jack' swapped his surplice for a leopard skin and insisted on being carried around in a coffin. And then there was the man who, like Noah’s evil twin, tried to eat one of each of God’s creatures....

Don’t expect Trollopian gentle eccentrics. These clergymen are the crème de la crème, entertainingly and often affectionately portrayed in short chapters, from curates to Archbishops, academics and headmasters, some well known others obscure.