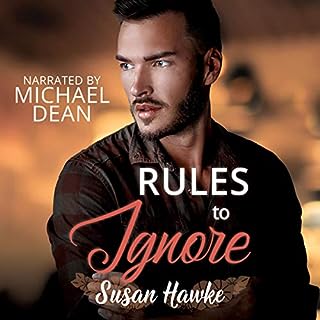 After losing his husband, Sammy Robustelli has learned to be strong while raising two children on his own. No matter what life has thrown his way, nothing seems too hard with his best friend and roomie Davey at his side. When the two friends learn that people believe they’re a couple, they can’t help but laugh. The very idea is a big joke...until it isn’t. It only takes a few wake-up calls before Davey wonders what happens if a guy might be in love with the best friend he can never have. It could never work for a pair of boys in need of a bossy top, right?


A sweet and delicious cherry on the top of an absolutely perfect series. Rules to Ignore, the seventh (and final) book in Susan Hawke’s Davey’s Rules series just couldn’t be any better! Davey finds his perfect match, and Sammy gets a happy ending… gah, I’m in heaven right now.

While this is the end of the Davey's Rules series, Ms. Hawke promises a spin-off and I can hardly wait! 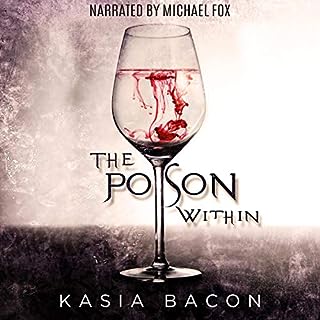 Black clouds of xenophobia gather over Radvadur, the western province of the Empire. The political climate is strained and fragile. A surge of Nymph refugees has stirred widespread hostility towards non-humans. When the investigation of a gruesome triple murder linked to the refugee camp ensues, it takes Inspector Käyru Skaer and his lover, Count Ellydhar Finn-Jánn, along an unusual path, at the end of which a precious gift awaits. Käyru and Elly are worlds apart in social standing, but they have found common ground in the bedroom - up against the wall and the stable doors, too.

What a creative, intriguing story! And I absolutely love this narrator. Michael Fox’s rich, sultry tones are just perfect for Kasia Bacon’s The Poison Within.

This is my first experience with the writing of Ms. Bacon and I can’t wait to dive into some more! She builds an incredible world in just 50 pages… we get excitement, romance, and mystery and that’s just the tip of the iceberg. Really wonderful.

The added bonus of doing The Poison Within in audio is the extra short story at the end. 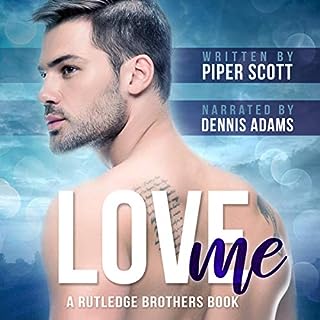 Trust no one. It’s a lesson Seth Cooper lives by. So why is it that when he meets Tad Rutledge, all he wants is to be wrapped in his strong arms and forget about the world? It’s insanity and Seth knows it - every second he’s not on guard is a second he’s at risk - but the kindness in Tad’s eyes makes him want to believe happiness is possible. Only the truth is far more complex. Seth can’t let anyone love him. Not now. Not ever. Not if he wants to survive.

Piper Scott lays the groundwork for a very intriguing omega-verse universe in the first of her Rutledge Brothers novels, Love Me. The story of Seth, a runaway enslaved prostitute, as he helps to bring the powers of The White Lotus Brothel to justice.

Very romantic, the wealthy Thad (who has a giant heart), pledges to help Seth. Ms. Scott performs her magic, and they fall in love.

The audiobook is performed by Dennis Adams (4 ⭐⭐⭐⭐). New to me, Mr. Adams does a great job. I love his smooth, melodic voice. I hope this is just the beginning of Mr. Adams career, because he’s perfectly suited to the M/M romance genre. 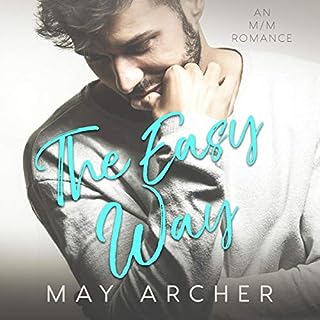 Camden Seaver had it easy - a loving family, plenty of money, and the freedom to follow his dreams while his older brother, Sebastian, took charge of the family business. But when a tragic plane crash killed his parents, all the responsibilities he never wanted landed firmly on his shoulders. Now saddled with his crazy, grief-stricken brother and his dad’s multimillion dollar company, Cam doesn’t trust in dreams anymore. He’s forgotten what “easy” feels like.

What a fantastic story! The Easy Way is my first experience with May Archer’s fantastic writing, and I’m thoroughly impressed. I can hardly wait for the release of the audio version of the next book in The Way Home series!

Ms. Archer has perfected the ratio of action/romance/angst, and this novel simply flys by. The characters are unique and interesting, there’s fantastic chemistry between the main guys, and holy, hot, damn but May Archer writes a wonderful love scene!

Michael Dean does a fantastic job with The Easy Way. I think he performs the *erm* romantic moments better than any narrator out there, and May Archer’s beautifully written love scenes are his forté. 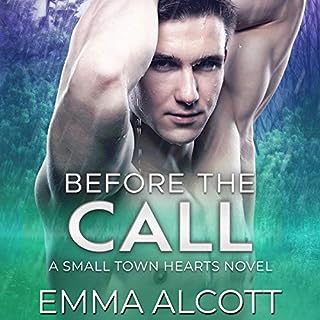 Emma Alcott’s newest novel in her standalone Small Town Hearts series, Before the Call, has been released in audio, beautifully performed by Michael Ferraiuolo.

A sweet friends-to-lovers story, Before the Call also touches on a few deeper issues as well. Without spoiling too much, I’ll just say one of the younger brothers is a victim of a cat-fishing predator. Everything turns out okay, plus the entire community rallies around the family in the best of ways.

Michael Ferraiuolo does a wonderful job bringing this one to life. His soothing voice is the perfect way to enjoy Ms. Alcott’s heart-warming story. I highly recommend this one! 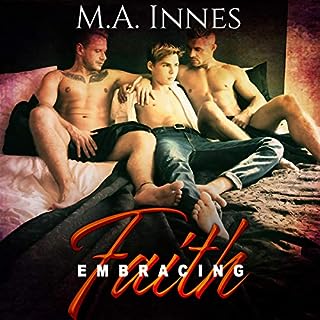 Cody’s been waiting years for his sexy former professor to take the leap and ask him out. Unfortunately, Cody’s youthful looks and the fact that Jameson has known him since he was 14 aren’t helping the situation any. When the precocious student finally decides that the slightly reluctant Jameson needs a little push to move him in the right direction, Cody knows just what to do: follow his curiosity.

I love the unique personalities in this one, and M.A. Innes does an amazing job of incorporating these three into a relationship. There are a few surprises, and the guys work through them... a good set up for Embracing Love.

Narrated by Kenneth Obi, he does a lovely job with the different characters. Mr. Obi gives each man a unique voice, and I particularly enjoyed the scenes between all three of them. 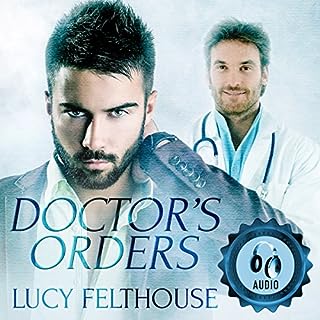 Hospital porter Aaron Miller isn't expecting a very exciting birthday. He and his doctor boyfriend, Blake Colville, are working opposite shifts, leaving Aaron to go home to an empty house and the prospect of another shift the following day. Just as he's leaving work, however, an unexpected sexy encounter in a supply cupboard leaves him feeling in a much more celebratory mood. And an impending dirty weekend away with Blake just puts the icing on the non-existent cake. But who needs cake when you're dating a dominant doctor?

I thought this was a sweet story when I read it a few years ago and I'm glad I gave it a go in audio. The narrator, Mitchell Pet, does a nice job with the characters. He brings them to life and I enjoyed the emotion he infuses into the scenes.

Established couple on a romantic getaway, exploring a few new toys... well written and a lot of fun. 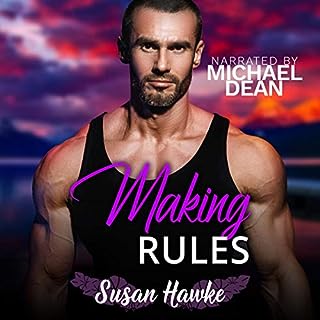 Before Davey came to work at Daddy’s Lap and began that crazy list of rules, his future bestie, Sammy, was already living happily ever after with his own Daddy-dom. From the moment they met over a gas pump to the day they were legally able to wed, leather Daddy Raphael Robustelli adored his linebacker-sized boy. This is their love story, as seen through a series of six short vignettes. Witness the moment they met, see the first time Davey came to the club, and so much more. This is a short 20k volume, filled with emotion and backstory for the entire series.

Oh what an incredibly beautiful and tender story! Susan Hawke pulls out all the stops and doesn’t spare our hearts with Making Rules. Honestly this is a must for fans of this series, and I’m continuing to recommend enjoying this series in order.

Sammy and Raphael’s story, from beginning to end, told in a series of six vignettes we see how they met, their first date, introducing Jeffrey and Davey and all the other supporting characters. Thank goodness Making Rules ends where it does, because I was crying so hard I don’t think I could have handled what we all know happens next.

Michael Dean infuses so much emotion into these characters, and it’s impossible to miss how this powerful story affects him. Mr. Dean delivers an incredible performance and the audio version is the way to go for this one!

an audiobook copy of Making Rules: Davey’s Rules Book 6 was provided to me for the purpose of my honest review 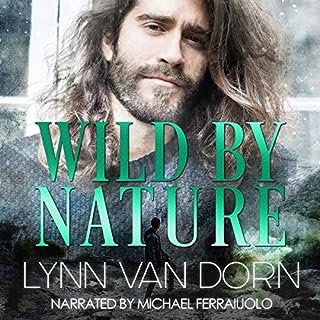 While on vacation, Hayden Blake and his ex-boyfriend get into an ugly argument. Needing some space, Hayden storms out of their rented cabin and gets not only lost it in the dense woods of the Upper Peninsula of Michigan, but injured, as well. Being rescued is a miracle, but being rescued by a man who looks like a Norse god wearing plaid...that's a dream come true.

WHOA 🔥
Holy smokes that's hot! Wild By Nature is a fantastic novella, made even better when performed by Michael Ferraiuolo. Gruff, older (and virginal) mountain man meets sweet, somewhat jaded, power-bottom - well I don't have to tell Mr. Ferraiuolo's fans that he kills this one.

Lynn Van Dorn always writes incredible relationships, and the speed at which she binds these two men is really something. They just need each other so beautifully, and their attraction simply works.

Fun little story, but mostly it's about the sparks between the couple and how beautifully Michael Ferraiuolo brings it all to life. 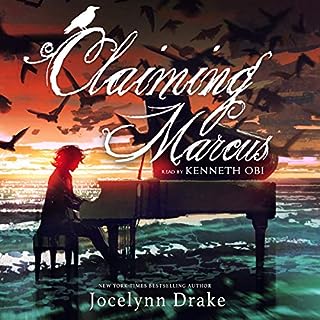 Vampires slaughtered my family. No one believed me until I met some new friends, who promised to help me get justice. But nothing prepared me for Marcus Varik. Tall, dark, and mind-numbingly sexy. But he’s also shy, protective, and adorably eccentric. Oh God, I should have never agreed to betray him. Hopefully, it's not too late to fix my mistake before I lose more people I love.

Four stars for the wonderful performance by Kenneth Obi. It’s clear to me over and over again how much fun he’s having bringing Claiming Marcus to life! Infusing each character with their own personalities (and there’s an extensive variety in this series), Mr. Obi shows no end to his range. I especially enjoyed the sweetness he brings to Marcus’ character. Old, a bit jaded, and resigned to his fate, Marcus’ gradual realization that he can have a life filled with love comes across beautifully in the audio version of Claiming Marcus.

Believing his desires for men is wrong, Marcus is a complete innocent in the ways of love. Even after several centuries, he’s resisted his urges. But when he meets Ethan, who is completely upfront and comfortable being gay, Marcus opens himself up and these two fall in love.

Jocelynn Drake does a wonderful job with the relationship between Ethan and Marcus, and their love story is the highlight of Claiming Marcus. The second part of the story is of Ethan seeking revenge for his family’s death, and the set-up for the political aspects of the different vampire factions vie for power.

Marcus is the eldest of four brothers, and this tight-knit family of musicians have an interesting rapport. I’m sure Ms. Drake is going to have a wonderful time with the next three novels in the series, and I hope we’ll get to see more of Ethan and Marcus in the upcoming episodes.