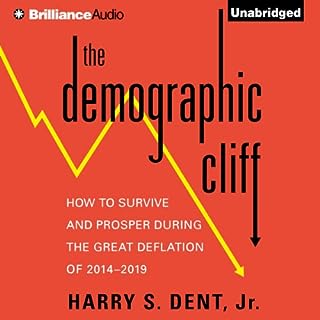 Throughout his long career as an economic forecaster, Harry Dent has relied on a not-so-secret weapon: demographics. Studying the predictable things people do as they age is the ultimate tool for understanding trends. Dent shows that if you take the time to understand demographic data, using it to your advantage isn’t all that difficult. By following his suggestions, listeners will be able to find the upside to the downturn and learn how to survive and prosper during the most challenging years ahead.

Great insights into the coming collapse. Only disagreement is on Gold. Yes it is a commodity but it is also Money and in times of crisis everyone will flock to it...commodity down turn or not.