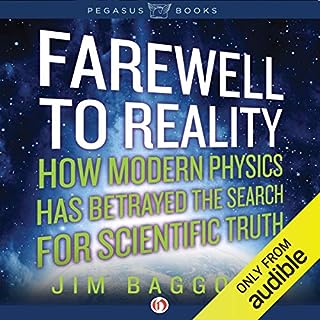 In this stunning new volume, Jim Baggott argues that there is no observational or experimental evidence for many of the ideas of modern theoretical physics: Super-symmetric particles, super strings, the multiverse, the holographic principle, or the anthropic cosmological principle. These theories are not only untrue; they are not even science. They are fairy-tale physics: Fantastical, bizarre and often outrageous, perhaps even confidence-trickery. This book provides a much-needed antidote.

It is much better than baggott's previous books, which were rather enthusiastical of the positivist copenhagen's interpretation of quantum physics. it is woven from a realist stance instead, defending einstein's realism against the dubiuos results by bell and aspect. but i am afraid it is a bit outdated, now that inflation theory has been repeatedly proved by experiments and that the infinite worlds interpretation is prevailing among scientists. so the multiverse theory is a consequence of proven theories and not a simple speculation. the same goes with string theoty, which is the best explanation of ultimate reality we have to date. so i would rather advise you to refer to tegmak's and deutsch's books on these topics. so do not take baggott's conclusions as the definitive word on present physics, but as a step towards the current interpretation of contemporary theories.

What could Jim Baggott have done to make this a more enjoyable book for you?

he could have revised his book with new data

Have you listened to any of Philip Rose’s other performances? How does this one compare?

Was Farewell to Reality worth the listening time?