Everything Isadora Starling wants is right there in front of her, but Toryn is off limits. She has been denying her heart all these years, afraid to lose him. Toryn Flame has a past full of secrets, none of which he can share with Isadora, the only person who truly matters to him. She's the one woman who has never shown a hint of lust toward him, but even if she did, pursuing her is forbidden. That all changes when the family Isa doesn't know decides to reveal who and what she is. After Isa's recent attack, their motives are unclear.

hooked from the start.

I loved this audio book so much that I couldn't put it down, the storyline and characters felt almost real I was hooked from chapter one. brandys work is the best I've listened to since becoming an audible member and will definitely be on the look out for future titles from her. This is a well earned 5 star rating for another brilliant creation from the wonderful mind of Brandy L Rivers. highly recommended :) 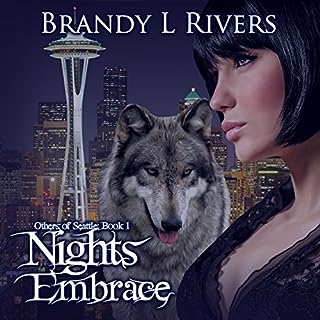 A song changed her life forever. Roxana Nights was late to another gig, thanks to her first love, and drummer. She left him years ago but he won't let her go. Then she hears a voice that captivates her. Trevor Malone recently moved to Seattle with his band. Music is his only passion, until he lays eyes on Roxana. The pull to her is irresistible. He's terrified she won't accept the beast within. A rival werewolf pack followed Trevor's band to the states. Unwilling to let grudges die, they target Roxy.

I want a Trevor lol

love love loved it! from start to finish I couldn't tear my ears away from this audio book. Knights embrace captured my heart in ways many other audio books have failed to do :) keep up the great work Brandy L Rivers, I'll look forward to listening to future titles of yours.