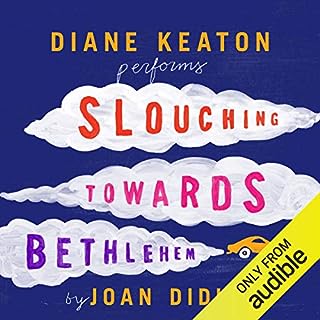 Universally acclaimed from the time it was first published in 1968, Slouching Towards Bethlehem has been admired for decades as a stylistic masterpiece. Academy Award-winning actress Diane Keaton (Annie Hall, The Family Stone) performs these classic essays, including the title piece, which will transport the listener back to a unique time and place: the Haight-Ashbury district of San Francisco during the neighborhood’s heyday as a countercultural center.

How is this book still relevant?

Where does Slouching Towards Bethlehem rank among all the audiobooks you’ve listened to so far?

one of the better Audio Books. I love Diane Keaton's Voice and she felt like the perfect choice for this book. The Content of the book is so insightful as someone born in the 90's the story's contained really illustrate a generation of people. To me the book was written by Didion to communicate over a generational gap. Maybe originally intended to bridge the void between hippy culture and there parents it somehow is equally relevant to a person who has come a good few generations later.

What other book might you compare Slouching Towards Bethlehem to, and why?

My Misspent Youth: Essays by Meghan Daum is the 90's equivalent but this has dated less well

What does Diane Keaton bring to the story that you wouldn’t experience if you had only read the book?

Nostalgia, her voice brings you back to 90's

"People with self-respect exhibit a certain toughness, a kind of moral nerve; they display what was once called character, a quality which, although approved in the abstract, sometimes loses ground to the other, more instantly negotiable virtues.... character--the willingness to accept responsibility for one's own life--is the source from which self-respect springs.”
― Joan Didion, Slouching Towards Bethlehem