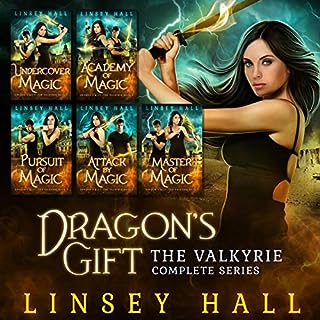 I've got two choices. Join the Undercover Protectorate. Or die. In a world of controlled magic, I’m an Unknown. Deadly power, little control. I’m only alive because I pay a Blood Sorcerer to keep me hidden. But when he comes to collect on the debt I can’t pay, one of his goons slams me with a deadly curse. Suddenly, I’m out of options and out of time...The Valkyrie boxed set contains all five audiobooks in the series full of non-stop action, adventure, magic, and romance.

The story is bundled, so you get a long ride of 5 books back to back, containing magic, realm jumping, chasing for a lost sister and becoming a "god" of some sort....

yeah okay, it's not like there aren't other stories likes this, so I thought I give it a shot as an audiobook.

The storyteller, or reader, seems to be used to be either dictating in front of a class or reading a telegram.
You constantly get :
A. a breathy ending in the sentence, as if to give a sensual note to it...
B. a distinct change of tone of the last word in the line, followed by a silence at the end, as if that would be the moment to make the remark "period"or "break"
- pronounced word separation, as. it . was. indeed. dictated. to. be .a . telegram. period.
break. next.line.

this goes on through the entire story in a kind of A-B, A-B reading cadence.
It distracts from the content in a very bad way.
I'm not trying to be mean here, I know it takes time and effort to do this, but I'm sorry, this story I think would benefit from a different reading style.

The story itself isn't a fantastic gem either. I seen better, I seen worse.
It's okay, but doesn't standout in a particular point or subject.

It could be that I need to read other titles first, in order to know where the characters come from and what their background is, but as it is, I don't feel like the mc changed all that much during the story.
Ok so she learned something about herself; about who she is and she developed new and more powers, but that's about it. Oh yeah...and a love interest, which she absolutely does not want, or have time for, so you know she will end up with exactly that/ him/ it.
that last thing gives you a nice insight in what to expect; it is all a little bit too predictable.

Saving her lost sister, sure, but please don't succeed in book 1 already, ok? We need to go through another 4!
Again, not trying to be mean, but the way the end is setup in a couple of the books here, it is just too obvious that the mc will fail and needs to get stronger first before succeeding.
The fact you see it coming takes away the excitement you feel or should be building. It's like, "hey, she's gonna fail, he's going to escape in the last second, so why cheer her on?"...
better call it quits now, go back to the training and come back with a new plan, eh?

the ghost dogs are a nice treat, those drew a couple laughs, but sadly not enough to save the story... 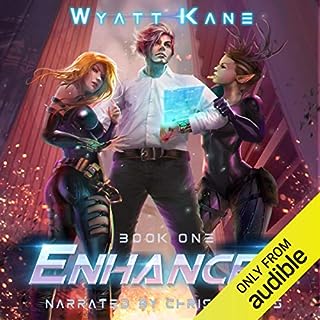 Ty is just a normal guy trying to do his best. He’s single, stuck in a dead-end job with the most hateful boss in the universe, and struggling under a mountain of debt. When he witnesses an impossible battle between two superpowered people, every instinct he has tells him to run. Instead, he becomes the owner of a device that can change his life in ways he can barely imagine. All he has to do is survive for long enough to learn how to use it.

Excellent start for a new series!

About the story; This is the first book of a series, so we get to meet the main character, meet some of the villains and friendlies. I read the book before I listened to the audible narrative and I recommend a look over at Kindle for the more elaborate story reviews. In short; A regular young man stumbles on to a street fight and gets partnered with an electronic wrist device by accident. This single action turns his world upside down...some for good, like suddenly he's gained the interest of some gorgeous superpowered women...but some for the bad too, because the bad guys are now highly interested in him or more, his device, too... And the battle between good and bad commences! All the wile our MC starts finding his role and his way in this new reality that is now his life. Although I have to admit that the idea of " regular guy meets gorgeous superwomen" isn't something I can call original, the story itself, the situation, the path to be taken...that is...and in my personal opinion, I like the way this series starts off! The narrative, as told by Chris Graves is easy to follow, very well articulated and has plenty of emotion in the voices. Although Graves alone does all the voices, I found it easy to accept a bit further into the narrative, like someone telling a good campfire story...well if those stories take 7+ hours! I do believe reading the story first helps, but it isn't absolutely necessary. Hope to see more future installments! 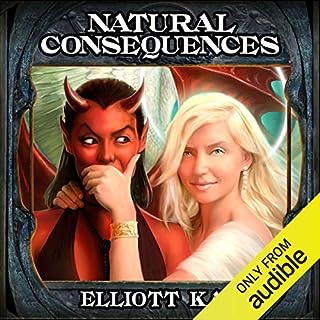 The exciting sequel to Good Intentions! Alex Carlisle has enough to deal with even on quiet days. Living with an angel and a succubus is no easy feat. One has divine responsibilities she can't explain, and the other tempts him toward a decadent lifestyle he's not sure he can manage. Add to that the stresses of college and trying to hold down a job, and it's lucky Alex can even keep his head on straight.

Best episode out of the 3

As with the other episode, it took me a short while to get used to the voice of Tess Irondale speaking for all characters. After a few minutes though, it is almost naturally easy to listen to. Excellent story-telling voice. The story itself, well, I read the book, before I listened to it, so following the story with it's flashbacks comes easy to me. I find this book the best out of the 3, because of a couple of things; - the relationship between Alex, Lorelei and Rachel deepens and blossoms to full bloom - The action scenes are good (and there's more than just one big one) - The undercover/ betrayal really gets under my skin - The history of Lorelei almost made me weep, such a tragic, sad story Really good story and excellent story-telling! 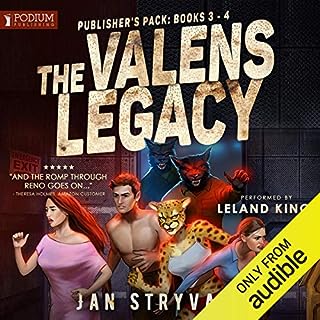 Over Our Heads, Book 3: Sean's still up to his neck in trouble, but at least he's finally found an example of his father's work, along with all of his notes. Now all Sean has to do is figure out not only how to reproduce his father's greatest achievement, but to solve the one problem his father wasn't able to. Head Down, Book 4: Things are starting to look up for Sean: he has a safe place to stay, allies, way too many wolves, and a couple of dangerously cute werefoxes around as well.

Every bit as great as the books!

Loved the book and loved the audio. I like the Valens legacy series, been reading them as they come out. So I thought trying an audio-book might be a nice, you know, to hear a story told by, a story you're familiar with... It disappoint in the least. The storytelling is gripping, and the emotions are coming through in a way I wouldn't be able to get from reading. Very well done, excellent speech and audio. I would recommend this to anyone fancying a Lykan/ fantasy/ magic adventure story...with a healthy dose of adult fun play...that too ;-) 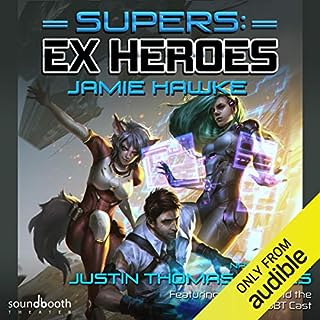 I never believed in superheroes. I certainly didn't believe I'd become one, or that strategically forming a harem of hot chicas and getting down with them to unlock my superpowers would be the key to my survival. Did I say my survival? I meant the universe's. No, really.... That's exactly what happened when I was taken to a galaxy of supers, thrown into a prison ship full of villains, and told it was up to me to stop them all.

Seriously funny to listen to

An action packed story with a lot of " stress-relief" . short story recap (for more elaborate reviews, see the E-book reviews); The MC gets transported to a supermax prison ship in outer space, where he encounters super-heroes...well...errr...super-villains to be more accurate. He slowly grows into his own power, which is sex-related in order to gain and access...not a big surprise, but makes for funny situations! Goal is to get to the bridge, before time runs out and survive the opposing powers to get there. Along the way the mC gains friends and makes enemies. The sex scenes are plenty, although not always truly necessary for the story progression. The audio/ voices are really good. I read the story first, some time ago, but it's not necessary to read the book, to understand and follow this audio-book, I had some where this was the case, but not this one. Clear and very well understandable, easy to follow. Personal tastes aside, I think the character's voices are well chosen too. I wouldn't say this is a must have, but I do recommend it, if you're looking for some entertaining story, with quite the portion of adult lewdness to top it all off ! 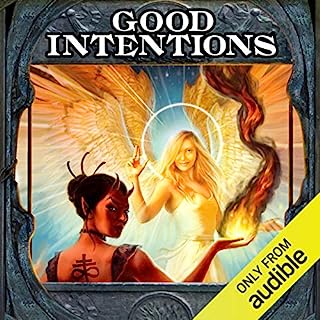 He knew it was a dumb stunt from the start. A midnight run through a cemetery to impress a couple of girls is hardly the stuff of legend, but Alex Carlisle longs to escape the crushing mediocrity of life after high school. Then he stumbles upon the ritual, and the cultists, and two bound and bloodied women. Alex intervenes and the ritual blows up in his face, leaving him bound to them both: Rachel and Lorelei, an angel and a succubus.

Call me a fan, I don't care, but I really, really love the story! Okay, back down to earth and some realistic comment; I would advice reading the story, before trying to listen to it. There are flashbacks into the history of the MC's previous life experiences. If you have read the story, these are obvious because of the font, but the audio isn't as obvious, which makes the flashback-windows rather confusing, especially if you don't know the story! I'm not going into the storyline, you can look up the E-book review for that. The story telling is crisp, well articulated and overall fine quality. I like the voices used for the two main women in the story, they aren't what I imagined, when reading, but after having listened to them some longer they seem to fit perfectly.