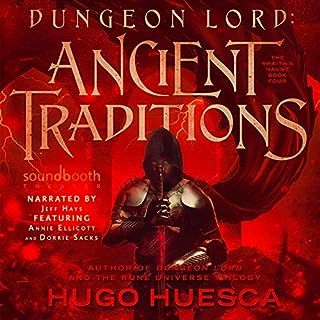 The secrets of the factory of nightmares are free for the taking...and Dungeon Lord Edward Wright intends to claim them. War is coming to Starevos, delivered by the navy of the Kingdom of Heiliges. The only hope Edward and his friends have at surviving the wrath of the Light is an ancient Factory whose defenses are as deadly as those seeking to conquer it. However, Ed is not the only Dungeon Lord who seeks the power of the factory. To save the Haunt, Ed must face war-forged Dungeon Lords older and crueler than he is, and everything he has learned shall be tested to its utter limit.

I found it hard to enjoy it as much as I did the first few books it feels like a something different it wasn't fun or sharing moments with eds friends feel like they didn't excist even tho they played a large part in the last book was nothing on the development of the dungeon and all the wacky things that goes on there. I'll be honest I had to listen to the last half of the book about 8 times just to finish it as I kept falling asleep it was that interesting and I normaly listen to lit rpgs while laying In bed and could be awake all night but not with this one. I hope the next book goes back to the first few books as there is already plenty other boring lit rpgs that take them self to seriously we really don't need another. 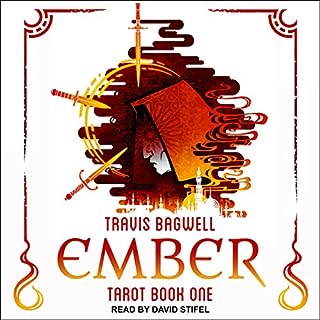 Finn Harris should have been the one to die. But he wasn't - his wife took his place. What was worse, he only had himself and his company to blame. They let their passion outpace their prudence, determined to revolutionize the world. While all innovation comes with a price, he never imagined it would cost him Rachael. Nearly a decade later, Finn is content to hole himself up and wait out the rest of his life. That is, until his daughter intervenes, forcing him out of his grief and into a new virtual reality game developed by his old employer. They're calling it Awaken Online.

I enjoyed the book of the new series the basis is sound but the overall story is lack luster each chapter felt like the previous kinda hoping something new was going to happen and the progress and surprises and twists in the story where extremely predictable. I love the original books but was really hoping it was got to go up a step or at least be as interesting in game and out of game as the original books where. 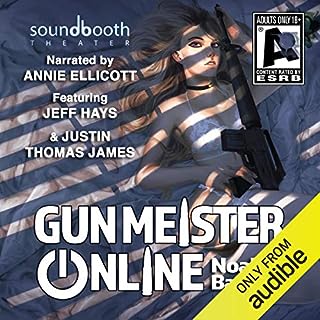 Gun Meister Online is a recently released virtual-reality combat simulator. Players assume the role of a Meister; fighting in matches and ranking up into higher divisions. Within the game, weapons take on human shape. These NPC's use a new Dynamic Distributed Personality System recently implemented, and many are excited by how life-like the AI characters are becoming. Charlie has only just begun to play, and he struggles to grow as a Meister. At the same time, he starts to take charge of his real-life outside.

I enjoyed the book I do think the character building was a bit rushed was starting to get interesting then all the special events started and everything was thrown out the window.

Soundbooth always do a great job home to hear my form Ellie. 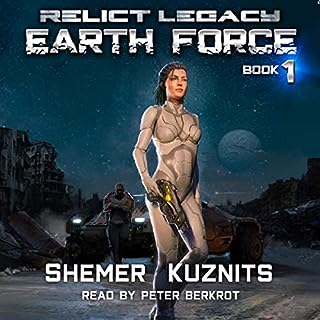 There was no warning. A mist descended from the sky, disabling all technology and causing a weird message to appear at the corner of everyone's eye. The situation grew even worse as animals and people started to warp, transforming into terrible monsters that prey on the living. Within months, human civilization had crumbled. Unable to fight the seemingly-indestructible beasts, the survivors are reduced to cowering in reinforced shelters. Helpless. All seemed lost until a few brave souls discovered the secret of their new reality: the Tec and how to use it to level up.

Overall I enjoyed the book once I had a grasp of the story and flow of the novel.

The first 3 4 chapters are very confusing and not very interesting at all it took some effort to push on with the book at first I was very close to returning it but I very much like the authors work and give him the opportunity to tell me a new story and he finely did as I said after the lackluster start one other thing I have with the book is its awful short like half the length of his other books and this book stop when it's really just finding it's feet. 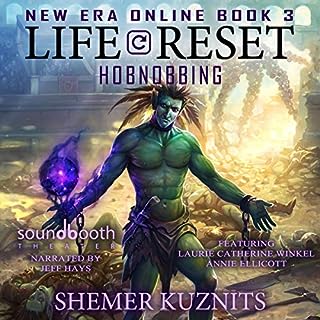 Having survived the first wave of invading players, Oren now seeks to strengthen his clan. With the Breeder's Den destroyed and most of Goblin's Gorge's resources devoted to rebuilding, his best hope lies in creating an army of golems. But for that, he needs Viridium, a rare metal that can only be obtained from hobgoblin towns, where Oren and his clan of goblins are viewed as nothing more than potential slaves.

I enjoyed the book but the change of structure and a lack of allot of the rp elements in the previous books did take away from the flow of the book. Jeff Hayes great as always but I did nodice allot of inconsistencies with the voices during the book and the added effects to the voices during the ui and quest notifications is just annoying was fine before with out them. Over all great story just hope they go back to the way book 1 and 2 is for book 4. 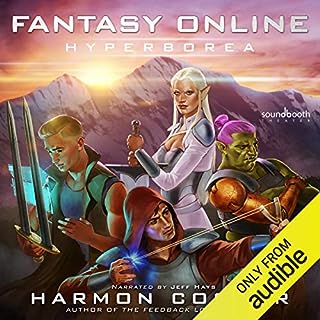 Nineteen-year-old Ryuk Matsuzaki and his best friend Tamana decide to start over with new avatars. When Tamana is suddenly killed right in front of him in a Tokyo subway, Ryuk knows there is only one place he can search for answers -- Tritania, the world's most popular online fantasy world. Standing in his way are a mysterious guild known as the Shinigami, and his older brother, a Yakuza crime lord hell-bent on squashing his dreams.

It is by no means as good as life reset but it has potential I found the book short and full of pointless filler I sewer about an hour of this book alone is stats and in some litrpgs they are useful in this book not so much most of them are pretty meaningless and tedious to listen too.