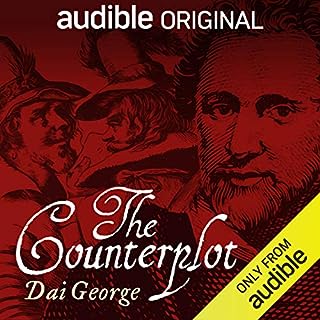 It’s 1605 in London, and Ben Jonson, a contemporary of Shakespeare, is finding life a struggle. With his career waning and his patron, Lord D’Aubigny, growing tired of him, he throws caution to the wind and writes a satirical play, Eastward Ho! But its laughs at the expense of the monarch cost Jonson dearly, and he lands in jail with his reputation in tatters. On his release, he searches for his estranged wife and discovers that his own long absences and the deaths of their three children from the plague have led her to take comfort with a furtive crew of ardent papists.

A riveting must-read for Jonson/Shakespeare fans

The Counterplot is a gripping story of courtly intrigue, religious tension and what it takes to make it as a struggling artist in Stuart England. With a well-realised chorus of characters, it sucks you into Shakespeare’s London through the eyes of the playwright Ben Jonson as he battles fortune’s wheel to come out on top. The gunpowder plot acts as a centrepiece, chucking in a good measure of tension and excitement. The author paints the period vividly and oozes with historical knowledge. But the characters feel enduring and the content applicable to the modern world. This is a must for those who love the Tudor and Stuart period and all of its exceptional literature.