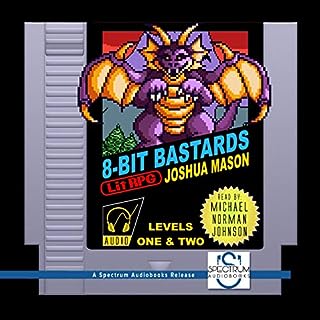 When you’ve maxed out your level, done every quest, and defeated every enemy, there’s not much left. So after seven centuries of immortality, Sean wants nothing more than to die. But when a woman from a past life informs him of a real, flesh-and-blood descendant that has hacked his way in, Sean finds a new purpose. The AI doesn’t take kindly to interlopers, and parks the intruder in the one realm so buggy that even the oldest, most powerful denizens of Afterall steer clear of it - the Bitrealm.

Interesting story about a group of bored and long since played out people in a "afterlife" style virtual reality, where dying starts to look good after 700 years of being alive.

One more quest to save a great-great-great grandkid is maybe just enough to motivate them to give it one more shot.
great twists and fun gameworlds.

The narrator is fun and engaging, keeping everything clear and with good tempo to keep the story going. 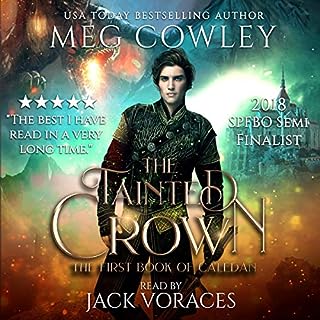 The kingdom of Caledan is in turmoil after the queen’s murder. Her son and heir, Soren, is framed for the killing by his uncle, who seizes the legendary throne of the Dragon Kings and rules with an iron fist to crush rising dissent. Soren is a fugitive; his only friend a broken, old man. The dragons, ancient allies of the throne, may hold the answers, but their whereabouts is a mystery that died with the queen. If he can find them, will they be the allies he seeks?

great start of a fantasy series

Nice start of a series, following the heir to the throne in his quest to avenge his mother and bring his uncle to justice.
The book works well, slowly unfolding the history/setting by explaining it to the characters as well as the reader. It starts of well and while here and there it falls into the odd fantasy trope, it doesn't harm the story.

Well narrated and most character voices are easy to seperate and keep track of who's who. no overly annoying voices or weird effects. 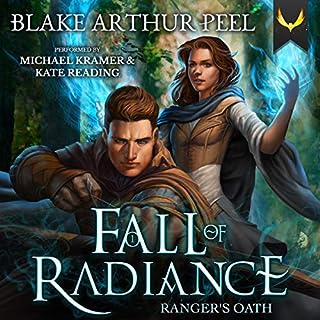 Magic has protected Tarsynium for a thousand years, shielding its people from a world ravaged by bloodthirsty demons. When a young ranger's apprentice named Owyn Lund discovers that the Arc of Radiance has been breached, he tries to warn anybody who will listen. But legends aren't supposed to be real. When a village is mysteriously destroyed, rangers, mages, and rebels all point the finger, blaming each other for the demons' brutality. However, Zara Dennel, a mage's ward, has heard Owyn's tale - and she's inclined to believe him.

nice fantasy book about a realm defended by magical barrier that is the last human stand against demons.
the book follows two young people that try to start their lives as a ranger and mage, following their elders into a mysterious attack needing to be solved.

Narration is done well, with the only minor nitpick that the male voice sounds a bit too deep and mature for the character. 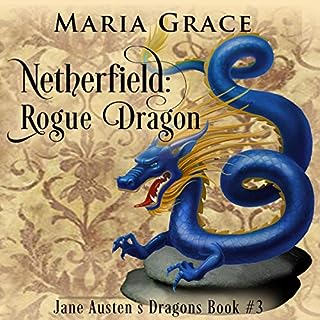 Elizabeth Bennet thought she was prepared to do anything to make the Dragon Conclave accept her beloved young dragon, Pemberley, into the Blue Order, but she had not anticipated it would leave her banished from her ancestral home and betrothed to none other than Mr. Darcy. But before Elizabeth and Darcy wed, they must find a dangerous rogue dragon before it provokes a war amongst the dragons and brings the fragile peace between dragons and mankind to a catastrophic end.

The last volume in a great series!

The (sadly) last chapter of a fun series, proving once and for all, that everything is better with dragons!

Once again we follow the adventures of elizabeth and mr Darcy in the world of dragon-rich England.

A fun and endearing story told amazingly well by Benjamin Fife, who once again manages to personify a large cast of people and dragons with good effects and voices. 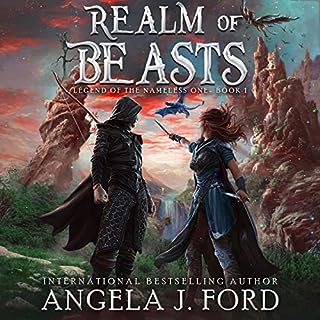 Tor Lir, the Nameless One, is unsure what he is. However, he knows he was born to bring balance to the powers of good and evil. Forsaking his birthplace and fleeing from suggestions of a dark knowledge he’d rather not discover, he decides to take his fate into his own hands. A chance encounter with a dead body, a dangerous beast, and a desirous creature lead him on the path to Paradise, where he senses imbalance.

reasonably well written story, if very very slow to start and a tad chaotic at the start, shifting between too many stories.

Narration is where this falls down, the narrator is very consistent in his reading speed and diction, both which are too fast/upbeat and overpronounced, not being helped by a very echoing recording.

the book picks up after about half-way, and becomes quite enjoyable then. 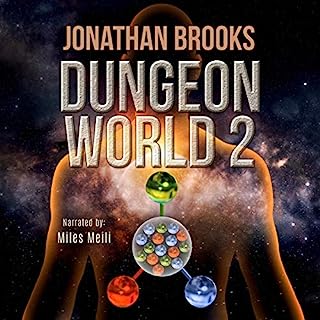 Fred did something bad. He didn’t intend to do it, but the destruction of a dungeon core - accident or otherwise - will likely result in horrific consequences for anyone connected with the crime. And not for just the perpetrators; everyone around them will suffer vengeful retribution from the nearby cores for the unthinkable act. Knowing that his mistake will end up endangering his new friends, the townspeople of Gatecross, and even his Guild, Core Power, Fred decides to do whatever he can to protect them.

Book 2 in a nice series!

An interesting idea behind how a world and character can be done in litrpg with a decent twist.

This series focus is on the main character that is a "dungeon core(think dungeon keeper)"/adventurer mix in a quest for retribution.

Interesting concept and I quite like the narration, if quite basic, it does what it needs to do.

Book 2 is opening more into the dungeon core bit and the character starts to develop more. 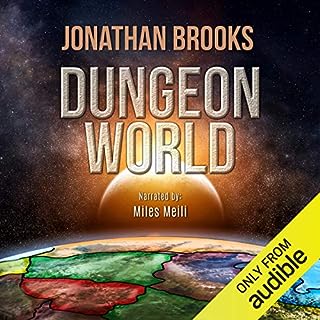 Far in the Northern wilds where no humans regularly frequent, a young man is left alone when his parents are murdered suddenly and unexpectedly. Now, without friends, family, or even supplies, he embarks on a journey to find out who targeted his parents - and upon whom he needs to enact his revenge.

An interesting idea behind how a world and character can be done in litrpg with a decent twist.

This series focus is on the main character that is a "dungeon core(think dungeon keeper)"/adventurer mix in a quest for retribution.

Interesting concept and I quite like the narration, if quite basic, it does what it needs to do.

My only minor problem is that they "stat sheets" are overdone, there's no real point in listing every 0/x skill if the characters never seem to put any less than full amounts to next level into them anyway. 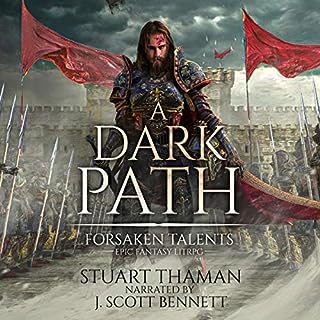 The Seven Portals to Wonder changed the world. The most advanced AI ever created powered the worlds, bringing infinite possibilities and endless adventure to everyone across the globe. War on Earth practically ceased as most of the planet's population became addicted to the game. Ben Hales was no different. He spent a few years saving enough money to buy lifetime passes for himself and his daughter, Ingrid. Now he has the cash, and Ingrid just turned 16, the minimum age required to play.

dark and dirty, but interestingly done

In the Future, everyone really wants to live in a semi-real virtual rpg, where you can respawn back in your home, so the consequences are relatively low.
The world has gone through some nasty times and everyone is happy to see that most people's urges to murder/steal and otherwise fight are in the virtual world where there is little consequence, until it goes all wrong!

A great take on an evil character, that still occasionally falls back to "is what i'm doing actually okay?".
While some of the moral dilemma's are shoved aside too easily occasionally, it doesn't impact the story too much.

Well narrated, well written and fun with not too much side-tracking, fun and hopefully continues the same in book 2 as well. 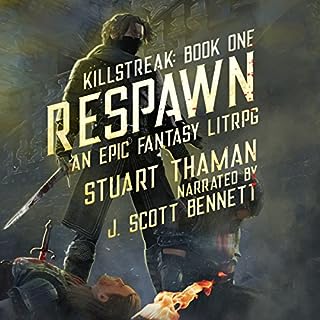 Lord Kadorax Darkarrow was born on Earth, but in Agglor, he's the highest-level assassin anyone can find. The leader of the famed Blackened Blades, he's made a name for himself, built a kingdom of sorts, and only had to respawn once along the way. Then a rogue band of jackals sends him all the way back to a dreary tavern in a tiny village to start over at level one. Hellbent on revenge, Kadorax sets out on a path littered with bodies - level up, find the jackals, slay their god!

good start of a series!

The book starts interestingly as the main character and his helper get killed off by a massive new threat to the world, and we get slowly introduced to the world on the journey from level 1 back to get revenge.
The character tries to power through and though his new character class seems to be somewhat randomly chosen with no thought, it slowly starts to live up to the idea.

Narration is great, well paced and with enough differences in the character voices to differentiate between the "cast".

While there is some minor weak points in how the world is supposed to work, it flows well and has enough of a difference with other fantasy to keep it interesting.
Looking forward to part 2! 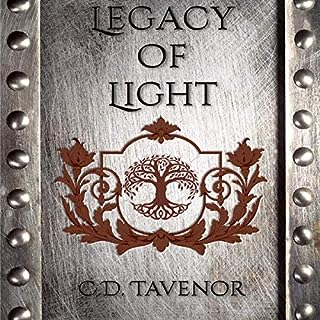 The Holy Empire hates the People of Light. Maripes, arriving in its capital, seeks to save his people from certain destruction. The Inquisition seeks theocratic justice, and it will stop at nothing to rid the world of those it considers evil. Still, Maripes must try. For, if he fails, doom will certainly befall his people. Standing in his way? The high inquisitor, the empress, and a million subjects all indoctrinated to believe he is evil incarnate. Should be an easy task.

this is a interesting enough start of a series, slightly let down by being quite short and having to jump forward rather fast to get to the next stage every time. The main character is quite engaging and even though she sort of gets her "powers" handed on a platter, is quite likable. The good/evil divide is quite black and white, but not out of place for fantasy.

Narration is decent if somewhat monotone at times, it gets better when the main character switches to female and the narrator gets up to speed.